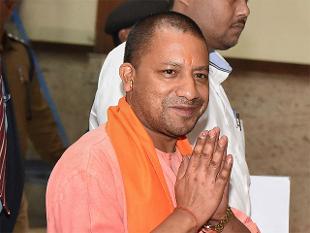 In the Post-truth era where fraudulent things are said so many times that they start appearing to be true, slogans such as ‘#NotMyCM’ were made to trend by pseudo intellectuals on social media, and CM Yogi Adityanath was stamped ‘communal’ even before he could assume office.

The basis of this was nothing but media trial, with an objective to create a bogus atmosphere of dread. His fanatical image is more of a media manifestation than it is reality.

The authentic concept of journalism and reportage has been lacking among the handful of people sitting in ivory towers, promoting a particular agenda. If you have to get your facts right you have to get on the ground and do some spadework. So let us try to unravel the real Yogi.

In his parliamentary constituency, Yogi garners votes from all sections of society. This is the reason why he has never lost an election and has been elected as an MP 5 times on the trot, from Gorakhpur. He has set up an office with paid workers for listening to and acting upon the problems of the complainants in his parliamentary constituency of Gorakhpur. No one goes empty-handed from the door of the Mahant of the Gorakhdham temple. Whether the requirement is of alms or of financial aid, for marriage or for health problems, all are granted. He also used to spend a substantial amount of time with the people of his constituency unlike most MPs.

Various shopkeepers, including Muslims, have their stalls placed in the Gorakhdham temple premises for years, without any threat or issue. There are various Muslims, even inside the temple premises, responsible for maintaining order, doing odd chores and looking after the cows. The temple’s doors are open for people of all creeds, caste and religion.

Yogi, popularly known as Maharaj ji among his followers, takes only 4-5 hours of sleep, gets up at 4 am, prays and looks after his cows every morning.

He possesses just one pair of robes. After he shifted to the CM residence at 5 Kalidas Marga, on the auspicious occasion of Nav-Ratri, he has got all ACs removed from the CM house. He has removed the leather from the sofas and the bed has been replaced by a takht (hard wooden bed). Unfortunately, these aspects of Yogi Adityanath are never reported by the main stream media due to the lack of masala (sensationalism) in them.

The criminal cases that had been filed against him have turned out to be politically inspired and he has not been convicted in any of these cases.

The sole purpose of Yogi after taking sanyas has been social service. Ever since he has become a sanyasi, he has been working incessantly (this link talks about decisions taken after becoming CM, so is not relevant when we talk of Yogi’s work since becoming a sanyasi over 20 years ago) for the upliftment of the down trodden. Both the cabinet meetings of the Yogi have been a ‘facepalm moment’ for his opponents. He has taken some unprecedented decisions. The most prominent decisions taken by him in his first cabinet meeting are as follows:

1.) Farm loan waiver for small farmers: All farm loans upto Rs 1 lakh will be written off. The move will benefit nearly 2.15 crore farmers across the state and will cost the government Rs 30,729 crore. Besides, the government has also waived off the non-performing asset (NPA) of 7 lakh farmers worth Rs 5,630 crore.

The first cabinet meeting presided over by Chief Minister Yogi Adityanath decided to float Kisan Rahat Bonds for raising Rs 36,359 crore required for waiving loans of small and marginal farmers who form 92.5 per cent of the total 2.30 lakh farmers in the state.

2.) Slaughterhouses: The government has stated that it is committed to adhere the Supreme Court and NGT guidelines regarding abattoirs in letter and spirit. Health Minister Sidharth Nath Singh said: “There will be no compromise on illegal slaughterhouses. The ones that have applied for renewal of licenses would be considered and their licences would be renewed.”

He said that so far 26 illegal abattoirs have been sealed by the authorities across the state and added that there has been no “overzealous” crackdown by the authorities. The authorities have so far taken action against illegal slaughterhouses and meat shops operating in different parts of the state.

There will be no role of middlemen in wheat procurement and no one will be allowed to play with the interests of farmers and stern action will be taken in case of laxity in any of the purchase centres. District officials have been asked to make all preparations for procurement besides extending basic amenities like water and shade for farmers arriving there.

The committe will see how they can get adequate remuneration for their produce. The committee will also look at how to help the potato growers.

5.) Industrial policy: The cabinet also took up the issue of investments in UP for setting up industries so the youth can get better employment opportunities in the state itself. For this, a five-member committee headed by Deputy Chief Minister Dinesh Sharma has been constituted. It would visit other states and study their industrial policies.

The committee will study the policies of BJP-ruled states like Gujarat and Madhya Pradesh among others for preparing an industrial policy for UP for enhanced investment through a single window system.

6.) Illegal mining: The Cabinet also has taken a decision to form a Group of Ministers (GoM) under Dy CM Keshav Prasad Maurya to prepare a report on illegal mining. The GoM will give its report in a week.

7.) Women’s security: Yogi Adityanath appealed to all officials to change their outlook towards treating women and sought zero tolerance in matters related to women’s security. Soon after, anti-romeo police squads were formed to provide safety to women.

1) The sugarcane farmers will get their pending dues within 120 days while the present dues will be handed over to them within 14 days.

2) The government has decided to purchase 1 lakh metric ton potatoes from UP farmers at a support price of 487 Rs per quintal.

3) A drinking water scheme for Bundelkhand has also been approved.

4) Faulty transformers will be replaced within 24 hours in urban areas and in 48 hours in rural areas.

5) All power ministry employees have been directed to reach out to the farmers of their districts and get to know the problems and difficulties the latter have been facing.

Being a sanyasi, the Yogi has no axe to grind as he left his house years ago. Formerly known as Anand Singh Bisht, Yogi has no relatives to oblige and even his siblings do paltry jobs to make their ends meet. (let this be an unsaid statement) Another thing which is commendable about him is his work ethic. He has been working intensively since the inception of his government.

Even after his unremitting work, a certain section of the media is investing all its energy in painting him communal by bringing across distorted facts and arguments. The bottom line is that democracy does not function on mere allegations and arguments, it does so on the mandate of the public which currently lies, well and truly, with the BJP and the Yogi. If the arguments of the opposition hold water, they can present an all-party backed candidate if and when the Yogi decides to contest an election for MLA. Otherwise there lies no point in just creating cacophony.

For more on The Yogi visit :