The Soros connection and YouTube’s removal of ‘The String’ video 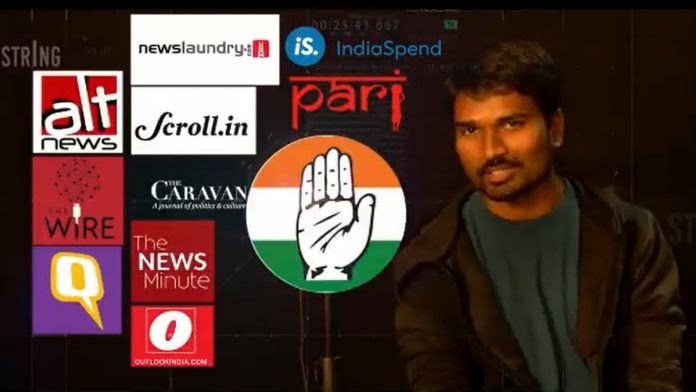 The toolkit accidentally put out by climate activist Greta Thunberg has opened a can of worms in the media fraternity and many organisations and individuals are rattled. The String, a YouTube channel with 4 lakh subscribers, provides an insightful view on things and has been posting videos about the nefarious activities going on under cover of the farmers’ protest. They recently posted a video on the conspiracy behind the toolkit created to defame Bharat in international platforms. The video was promptly taken down by Google-owned YouTube, but can be watched below:

The video exposes the links between the international powers and their coalition with anti-Hindu Bharatiya media outlets like The Wire, The Quint, Scroll, The News Minute, Newslaundry and the so-called fact check website Alt News to peddle propaganda against Bharat in the issue. It explained how these found mention in the toolkit and what’s the link between them and those behind the toolkit. These media outlets and the journalists working in them are part of DIGIPUB News India Foundation, an association of digital media outlets.

Alt News, The Quint, Scroll, Newslaundry, The News Minute, Cobra Post and News Click, which was recently raided by the Enforcement Directorate(ED) for suspicious foreign remittances amounting to 30 crores, are some of the founders of this association. News Click is alleged to have shown receipts for this amount as “export of services” which piqued the interest of the ED officials. The String video also mentions a foreign writer Annalisa Merelli who endorsed the media outlets in order to channel funds to them a few days before Greta shared the toolkit.

The String in its video revealed how billionaire George Soros, who is known for openly admitting to toppling ‘unfavorable’ governments and has identified nationalism as a threat, funds so-called digital news websites to indirectly influence the political narrative. The video talks about how Alt News, a propaganda site which conveniently ignores facts to propagate the left-liberal narrative, has been certified by International Fact-Checking Network (IFCN) which in turn is supported by the Poynter Institute. Now the link gets murky as the Poynter Institute is funded by George Soros’ Open Society Foundation. The String video further revealed that the Poynter Institute is also funded by tech giants like Facebook and Google.

Vinodh Kumar who speaks in the video supposedly asked for the people associated with these media to be ‘hanged to death’ for conspiring against Bharat, implying they should be tried as per the law of the land and given death penalty. However, YouTube has taken down the video citing it ‘violated YouTube’s policy on harassment and bullying’. Vinodh had mentioned the names of Barkha Dutt, Alt News’s Mohammad Zubair, Congress supporter Saket Gokhale and YouTuber Dhruv Rathee as having figured in the toolkit posted by Greta. When the video caught the attention of leftists, Barkha Dutt tweeted that while Disha Ravi has been arrested, Vinodh Kumar is free. Later, NewsBharati reported that some of the people exposed by The String team have filed a case on them.

However, The String‘s twitter handle has assured that they are safe and support has poured in from all sides assuring them of legal aid. While the anti-Hindu media outlets and personalities are trying to paint themselves as the victims and divert the issue, the fact remains that the video’s main thrust was on revealing the Soros-media connection.

Commonwealth Human Rights Initiative (CHRI), a Delhi-based FCRA NGO, is run by one Sanjoy Hazarika who is a journalist and a Honorary Research Professor at Centre for Policy Research. The FCRA background of this organisation has been discussed in detail here.CHRI India used to get funds from Soros’ Open Society Foundation(OSF) in the period of 2006-18 amounting to a quarter of the total INR 50 crore fund it received in that period. But then OSF was put on the prior permission watch-list by the Union Home ministry in 2016 which means Indian NGOs cannot receive funds from OSF without getting the approval of the government. OSF overcame this hurdle by donating to CHRI-UK which in turn donates to CHRI-India. In 2019-20 CHRI-UK sent INR 8 lakhs for the purpose of ‘an activity called SAMDEN (a network of media professionals – a new activity started by CHRI)’.

So the allegations raised in The String video appear to be substantial. Now it remains to be seen whether the government follows up with investigation and takes action on those who have been conspiring against Bharat.