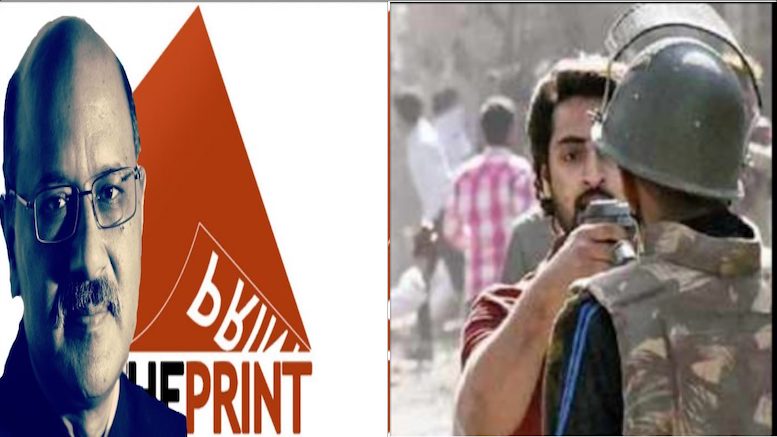 Mohammed Shahrukh, the man who shot eight rounds and pointed a gun right at a policeman’s face during the Islamist rioting that wreaked havoc on Delhi last week, has been arrested from Western UP’s Shamli.

Ajit Kumar Singla, Delhi’s Additional Commissioner of Police informed that authorities are trying to recover Shahrukh’s gun which he aimed at policeman Deepak Dahiya during the violence in Jaffrabad, in the Northeast region of the city. Shahrukh’s father has a narcotics and fake currency case against him, and the man himself is said to have links to a criminal gang. “The day on which the communal violence broke out in northeast Delhi, I was called for emergency duty from my training centre. Suddenly a man in maroon colour T-shirt came charging at me and threatened to shoot me. He could have opened fire at me, but I remained calm and did not show my fear,” cop Deepak Dahiya said.

As soon as the arrest happened, left-liberal-Islamist media outlets kicked into action doing what they do best – provide cover for Muslim extremists, criminals & terrorists.

Shekhar Gupta’s The Print decided to follow in footsteps of senior Islamist apologists like Barkha Dutt and Harender Baweja (currently Editor Investigations with Hindustan Times) by dissecting Mohammed Shahrukh’s personal lifestyle to build a sociological profile of the ‘angry young man’ who is really not that dissimilar to other ‘cool dudes’ today.

An article on an armed man who shot several rounds before charging right at a solitary policeman carrying just a lathi, begins with these lines –

“He is an aspiring model, a TikTok buff and loves fast bikes. He always aspired for fame and dreamed to see his picture on the cover of a fashion magazine.”

Shahrukh went to ‘save’ his sister who was one of the protesters at the Jaffrabad sit-in against the CAA protests, we are told. Son of a Sikh father (who converted to Islam) and a Muslim mother, he is a fun-loving boy who loves Punjabi songs, we are told. His bullets didn’t really hit anyone, he just did what he did ‘on the spur of the moment’, we are told. The underlying subtext – come on you blood-thirsty Hindutvwadis, this was just a ‘chota-mota‘ shooting incident which is not uncommon in big cities….give the ‘kid’ a break!

This rinse repeat of normalising jihad everytime is nauseating. I pray to get rid of these enemies one day. https://t.co/tiKX9TTU6L

While left-liberals are working hard to soften Shahrukh’s image, folks at Milli Gazette (an Islamist publication often quoted by left-liberals) took it up a notch. Mohammed Shahrukh was actually the hero of the Muslim community as he ‘saved 80 lives’ with his gun!

But when did facts or truth matter to Islamists and their apologists? They still claim that the Godhra train carnage was an ‘accident or inside job’. And secular Hindus expect us to reason with these people?

Islamists and their apologists like Shekhar Gupta threaten the integrity of the nation and the lives of all citizens – Hindu, tribal, Muslim, Sikh, Christian, Jain, Buddhist.

This tweet sum up the blatant double standards at play among liberals in media (especially the seniors who mould the outlook of their junior): they show deep-seated animus for Hindus and Hindu Dharma, and apologism for radical Islam –

Real Terrorists are kids who play Holi with pichkari. pic.twitter.com/kbtJydR86u

When the nation’s intelligentsia and opinion-makers are shielding Islamists and normalising violence against the State, is it any wonder that Muslim youth are cheering for the likes of Mohammed Shahrukh?