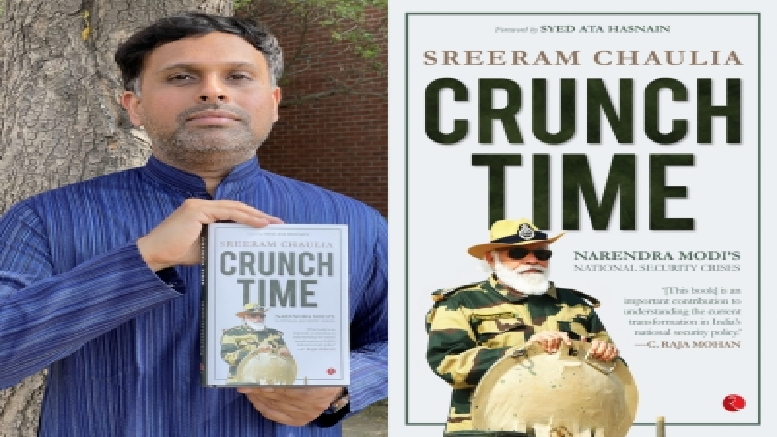 Bharat moving in a “centripetal direction”, as reaffirmed by the results of the just-concluded Assembly elections, is “bad news” for China and Pakistan as any provocation now would see them “incurring heavy costs”, says noted social scientist and opinion maker Sreeram Chaulia, whose new book, “Crunch Time”, details the paradigm shift in the countrys national security calculus since Prime Minister Narendra Modi assumed office in 2014.

Even so, Bharat must “prepare for a more belligerent and aggressive” China in the wake of the Russia-Ukraine war, strengthen defenses all along the disputed border and in the Indo-Pacific, invest more in the defence sector and forge “stronger coalitions” with the Quad and Quad-plus countries, Chaulia, professor and dean at the Jindal School of International Affairs at the O.P. Jindal Global University, told IANS in an interview.

At the same time, Pakistan “does not pose any existential threat to India”. The Modi government’s attempts to keep the Line of Control (LOC) “quiet” to focus on the Line of Actual Control (LAC) with China “ironically” could “bring about a tactical thaw for India with Pakistan”, even though “breaking the Sino-Pakistani strategic collusion is no easy task”, Chaulia maintained.

Central governments in Bharat, before Modi’s prime ministership, “were hobbled in their approach to national security due to their internal weakness. Coalitions involving a motley group of political parties, excessive bargaining and blackmail by partners from regional parties at the state level, identity politics that divided India into a patchwork of ethnic, caste and religious groups, and national leaders lacking in political gravitas all these features had crippled central governments badly prior to 2014”.

“This translated into ineffective and cowardly responses when India’s security was threatened by external adversaries. The consolidation of a strong centre under Modi has thrown out this paradigm and presented a unified face of India as a state and a nation to China and Pakistan.

“The recent Assembly election results in Uttar Pradesh and other states confirm the trend of India moving in a centripetal direction, which is bad news for China and Pakistan. Provoking Modi’s India means incurring heavy costs for our two external adversaries now,” Chaulia asserted.

What are the implications for Bharat of the Russia-Ukraine war?

Noting that the war “has thrown a wrench into the strategies of all powers”, Chaulia said Bharat did not want the US and its European partners to get embroiled in a prolonged confrontation with Russia “that would distract from the clear and present dangers posed by China in Asia”.

Also, the shift in thinking in Washington and Brussels that Russia is the main threat and that the “new Cold War” is between Russia and the West “is not at all beneficial to India”, he said.

Moreover, the way in which Russia attacked Ukraine “will embolden China to attempt more browbeating, if not outright invasion, of Taiwan and smaller adversaries in Southeast Asia, such as the Philippines and Vietnam. So, we have to prepare for a more belligerent and aggressive China now and strengthen defenses all along our disputed borders, as well as in the maritime domain of the Indo-Pacific”, Chaulia contended.

Pointing to how the Modi government pushed back at Beijing’s expansionism through the doctrines of “security first” and “offensive defence”, he added: “Going forward, investing more in India’s defence and forging stronger coalitions with QUAD and QUAD-plus countries is the only way to face the Chinese menace,” he added.

How does he see Bharat-Pakistan situation panning out?

Contending that China has replaced Pakistan as the “principal threat” to Bharat’s rise as a leading power in the world, Chaulia said that while Pakistan “can plot terrorist attacks against India”, it is “significantly weakened due to economic failure and internal fissures”.

“Pakistan does not pose any existential threat to India. Pakistan’s role is to act as a proxy or junior partner of China to keep India hemmed in within the subcontinent. Realising that the China-Pakistan axis could produce a two front war’ problem, the Modi government has attempted to extend ceasefires with Pakistan and keep the Line of Control quiet so that India can divert and concentrate all its forces on the LAC,” Chaulia said.

“So, ironically, the enhanced Chinese threat could bring about a tactical thaw for India with Pakistan. At least, this is the hope. But as readers will learn from my book, the mainstreaming of jihadist culture in Pakistan means that whatever effort Modi has made for peace, or at least a thaw, with Pakistan has not worked out. Breaking the Sino-Pakistani strategic collusion is no easy task,” he added.

What are the implications for QUAD?

In the wake of the Russia-Ukraine war, Modi has asked fellow QUAD members to remain focused on the core objective of peace and stability in the Indo-Pacific and just as India “cannot realistically handle a ‘two front war’ with both China and Pakistan, the US and its allies cannot simultaneously contain both Russia and China”, Chaulia said.

Bharat’s role in QUAD now, he said “is to ensure it does not lose its direction and its raison d’etre. The advent of a conservative government after recent elections in South Korea and the rise of bipartisan anti-China politics in Australia will ensure that no one takes eyes off the biggest challenge to the rules-based international order ï¿½ China”.

“The diplomatic partnerships with QUAD and QUAD-plus are key in the emerging geopolitical scenario,” Chaulia said, detailing in the book, how Modi has used military, diplomatic and economic tools to push back against China and Pakistan during four crises the attack on the Brigade Headquarters at Uri, the Doklam standoff, the Pulwama attack on a CRPF convoy and the incursions in Ladakh – and how India’s entire security establishment responded in a synchronised and coordinated manner.

Arguing that the reforms forged by Modi to Bharat’s national security apparatus have been transformative in terms of improving the country’s strategic culture and overcoming the tag of a soft state’ Chaulia charts how Bharat finally moved in the direction of developing a strategic culture due to the Prime Minister’s own commitment to improving national security, and also because Bharatiya society has shifted in a nationalistic direction.

Significantly, one of the tasks of the over-reaching Defence Planning Committee (DPC) created by government in April 2018 and chaired by National Security Advisor (NSA) Ajit Doval with the chiefs of the armed forces, including the CDS, along with senior bureaucrats from multiple ministries, is the formulation of a National Security Strategy (NSS) that successive governments have not been able to define since Independence but is now an emerging reality.

“The National Security Strategy has not been made public, but it is very much guiding the government in its responses to China and Pakistan,” Chaulia said during the interview.

“Unlike the US, where the legislature compelled the executive to publicly announce an NSS since the late 1980s, India does not yet have heavy parliamentary involvement and scrutiny of the executive branch’s foreign policy and national security policy. So, the NSS is a work in progress, but not declaring it explicitly does not mean our adversaries are unaware of how Modi’s India will respond if they attack us.

“Under the Doval doctrine’ (elaborated in the book), India has formulated a matrix of how to respond proportionately whenever there is a terrorist attack from Pakistan or a territorial incursion from China,” Chaulia added.

He also paid rich tributes to General Bipin Rawat, Bharat’s first Chief of Defence Staff (CDS) who died in a tragic helicopter crash on October 8, 2021, terming the creation of the post “the crown jewel in Modi’s security overhaul efforts”.

“General Rawat’s loss is a huge one, a void that cannot be easily filled. The CDS was the architect of (the) emerging unified jointness’ of the Indian Army, Air Force, Navy and paramilitary forces… General Rawat’s sad demise means there will be delays, but the far-reaching reforms Modi has triggered will go on and make India’s crisis-response mechanisms to Chinese and Pakistani attacks a lot stronger in the future,” Chaulia maintained.

He said the inspiration for writing “Crunch Time” is that “there is a Bharat which precedes the modern-day conception of Bharat and that Modi and his foreign minister, S. Jaishankar, are reviving the millennia-old Bharatiya tradition of statecraft, geopolitical manoeuvres and risk-taking to deal with external opponents”.

“The more India becomes Bharat, i.e. its authentic pre-colonial self, the stronger India’s national security will become. China and Pakistan’s calculi in provoking India will change dramatically once they realise that Bharat is back,” Chaulia concluded.