The Cowardice of Liberals When Confronted with Retrogressive Islam 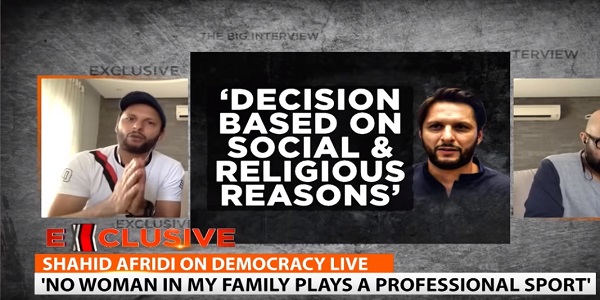 Recently, the autobiography of Shahid Afridi was released, and generated a fair bit of media attention, both across the border and here in Bharat.

The first interview Afridi and his author Wajahat Khan gave about the new book to a Bharartiya TV channel was to Barkha Dutt’s show democracy live. The interview can be viewed here:

Now, the book contains various controversial cricketing statements; but those are not the topic of this article. This is not an article about cricket at all.

One particular statement Afridi makes is regarding his 4 daughters. He says that for “religious and social reasons” they are allowed to play only indoor sports, but not outdoor sports such as cricket.

In the interview, Barkha Dutt asks him about this. His reply was very clear. He says that he is a Pathan, and a Musalman. “As a Musalman, I know the limits for women” he says. He makes it amply clear that Islam places far more restrictions on women (compared to men) and it is in observance of these Islamic restrictions that his daughters are not allowed to play outdoor sports.

Likewise, Afridi’s wife never appears outdoors without a full face burkha and niqab. As far as I know, there is only one picture of her, and Afridi tried initially to deny it was her by saying it was “just a family friend.”

This is typical in Muslim culture in general, and Pashtun Muslims in particular. One can observe that videos taken of cities in Pathan dominated areas (such as Peshawar) do not show any women at all.  It is as if the entire city is inhabited only by men. The women are all restricted to staying within “chaar-diwaari” (indoors).  She is regarded as “beghairat” if women leave their home. This is in accordance with specific injunctions given to Muslims in both the Quran and the Hadith.

Now, when Afridi clearly states that as a Musalman, he knows the limits to be placed on women, Barkha simply smiles it away and trivializes the matter saying “we will discuss this when we meet.” As if it were a discussion of the forum “Tendulkar or Kohli—who is better?”  She does not show any indignation, either as a woman or just as a fellow human being being told that 50% of humanity should be placed within “limits” as per Islam.

Compare and contrast this to her ranting and vitriol when speaking against Hindus. When the Hindus of Rasana protested against being framed for the murder of little Kanjak of Kathua, this same journalist wrote highly judgmental and angry articles about them in the Washington Post. The Hindus of Rasana were not “defending rapists” as she accused them of doing; rather they were asking for a CBI inquiry into who committed the murder (and possible rape) of the little angel. But even such a demand was angrily dismissed by the journalistic sensibilities of this particular Lutyen’s journalist.

One wonders, therefore, why this person would remain a lamb when confronted with Afridi espousing his Islamic retrogressive thinking, and suddenly turn into a ferocious lion when attacking Hindus. I suspect that the answer is simply cowardice.

After all, it is easy to attack Hindus. There is no penalty, no payback.  But attack Islam, and your life is in danger the very next day. Witness what happened to a courageous writer Taslima Nasrin who dared to write against Islam’s retrogressive ideology. She cannot move freely, and even her whereabouts are often kept secret.

There are multiple Muslim leaders political and religious who openly ask for her to be killed in keeping with Islam’s rulings on blasphemy. Hindu Dharma has no such punishments. That is what the Barkha Dutts of this world exploit. They don’t dare question Islam because that would mean their air conditioned offices might suddenly be too insecure for them. Don’t have the courage of a Charlie Hebdo, do these “journalists.” So they stick to the easy job of attacking Hindus and Hindu Dharma.