Colonialism in media : Why is Joseph Biden not a “Christian Nationalist” ? 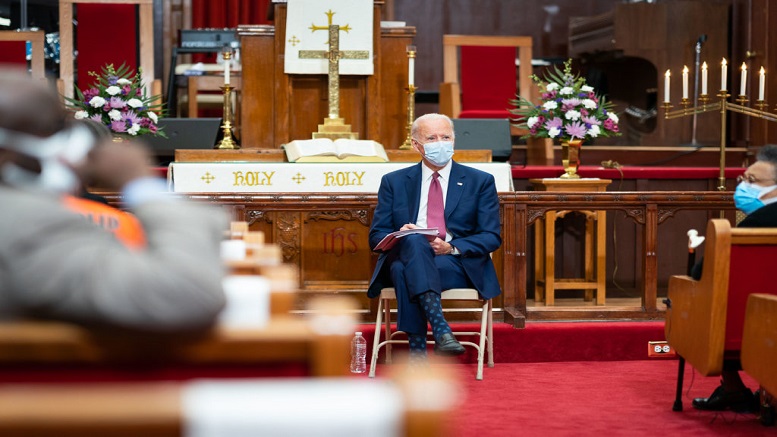 Words have power. That is what Hindu Dharma says and that is the basis of every sacred book ever. Propagandists in modern world, Nazis and Communists alike, understood this and established their vehicles of propaganda. Underlying both their propaganda was the belief that any other system in the world was inferior. Many a times, this was laced with more than a dab of racism. The legacy of those propaganda vehicles continues. The Bharatiya sepoys of these propaganda factories have also ingrained the same belief system and propagate the same.

For them, the world can be understood only by western categories, so one is either “left” or “right”. Similarly, if one has a western style political system, it is a “fledgling” democracy, always in danger of being overwhelmed by forces of darkness, that find root among the backward beliefs of the natives! If not a “fledgling” democracy, that country is, of course, a dictatorship.

However, the countries of whites are above these categories. It does not matter that US could give civil rights to its black citizens and end segregation only in 1960s. It is immaterial that even today, blacks in USA face rampant racism. It should not matter that it was only in 2020 that US elected a women to second highest post, when in Bharat and neighbouring countries, it happened decades ago. It is not worth mentioning that in Switzerland, women were given right to vote only in 1971. It is irrelevant that just 60 years ago, western world was looting and killing in the colonized countries in the most barbaric and uncivilized manner.

Indeed, the same political domination and ruthless economic loot that enriched them today, supposedly also gives them the moral and intellectual right to condescendingly term our democracies as fledgling, precarious and prone to fascism. Hindus can be berated and abused for their past, while the caste system of Europe can be blissfully forbidden. This is a form of racism in media and academics that still pretends to be an aloof observer of the natives and dispenses advice on half baked understanding of ‘native’ culture and politics.

Take an example of the time Joseph Biden assumed the role of the President of the USA. The coverage in the New York Times praised his religious conviction. Compare that to its coverage of Yogi Adityanath’s assumption of Chief Ministership of UP. A Twitter user made a comparison that can be seen below.

It would be interesting to note that USA pretends to be a secular democracy, but its actions speak otherwise. The USA has its motto as “In God we Trust”, which was adopted in 1956. Probably, we should say that in 1956, the USA “took a precarious turn towards politics of the religion by adopting a religious slogan as national motto and thus subverting and undermining its secular constitution”.

In any case, people might say that the word “God” is unspecified in the motto. However, the government makes it clear by its actions as to which “God” this refers to. US govt supports evangelist organisations for “development” work in foreign countries directly through USAID. Christianity was in full display during the inauguration of Joe Biden. All US Presidents have their own “spiritual advisors”, who are always from some Christian denomination or other. They also go to Churches regularly and no US media house demands that they should also go to “mosques and temples to maintain the secular fabric of the nation!”

Despite all this, Joe Biden would never be termed as a bigot or a Christian nationalist. He would not attract the charge of being Islamophobic and fascistic even if he pushes US into new wars in the middle east and despite enabling and maintaining the torture chambers of the CIA.

The colonial bias in alive not only in western media, but has percolated to most of the Bharatiya media. It continually seeks external validation and uses the same words, phrases and ideas to depict Bharatiya politics. It has not developed a specialization to discuss foreign politics and as a result just rehashes the same half-truths and uses the same idiom to discuss their politics.

This is one of the biggest examples of soft power in today’s world. As Radha Bharadwaj said in a tweet once : “When the slave will whip himself after the master has long gone, the work of colonialism is complete”. The mental colonisation of Bharatiya media and intellectual class is complete. They are totally out of sync with Bharatiya thought and worldview. No wonder it was wrong about the election and reelection of Narendra Modi. It needs a big jolt to get up and see Bharat through the eyes of its own people and not through the glasses of western categories and theories.