Controversial Bollywood actor Salman Khan managed to get a same-day hearing with the Supreme Court (SC) over alleged threats received for his home production film LoveYatri (original name LoveRatri), which many have claimed is demeaning the Hindu festival of NavRatri.

Granting protection to Salman Khan and the film-makers from ‘harm’, the SC said there will be no FIRs registered on the basis of the movie name or song or any of its contents, legal correspondent of The Hindu newspaper tweeted. 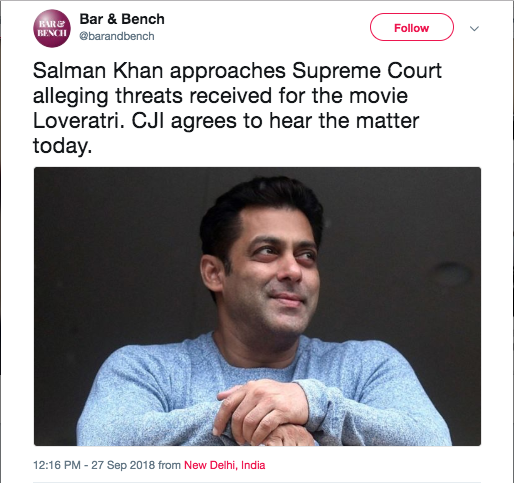 The alacrity with which SC granted a hearing in this matter did raise some eyebrows. Combined with other recent cases – denial of transit remand for suspected urban naxals, protection from arrest for perjury-charged & dubious social activist Teesta Setalvad, midnight mercy petition hearing for convicted terrorist Yakub Memon etc – it lends weight to the perception that certain sections of society have fast-track access to the highest court of the land.

‘LoveRatri’ – a raunchy take on Hindu festival of NavRatri?

Navratri is a 9-day festival celebrated by Hindus all across Bharat, where Maa Durga is worshipped in all her divine forms. The festival culminates on the 10th day which is celebrated as Vijaydashmi or Dusshera, signifying victory of good over evil.

In the state of Gujarat, Navratri is celebrated through the traditional dance form of Garba – derived from the Sanskrit word Garbha (“womb”) – where both men and women dance in concentric circles signifying the cyclical Hindu view of time around a centrally lit lamp or murti of the Devi.

Modern garba is heavily influenced by another dance form called Dandiya Raas, resulting in a high-energy dance that has become the preferred form of celebrating this ancient festival. Today, Garba celebrations have become large, fancy affairs where the Bollywood effect is clearly visible on choreography, songs and dresses.

Exemplifying the anti-Hindu sentiment which is usually found bubbling under the surface in all left-liberals is this tweet by Lutyens’ favorite Raheel Khursheed (a Journalist, Ivy League fellow, ex-employee of Twitter India & Change.org) – 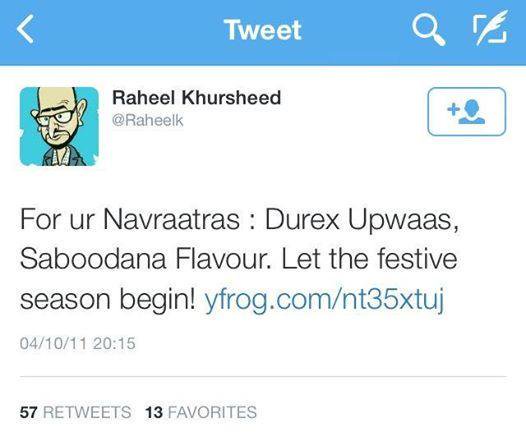 This bashing of Hindu festivals and Hindu society has a very clear agenda as Aravindan Neelakandan has expertly analyzed in this article.

What is ironical in the case of Navratri is that the same liberal pop-culture, Bollywood and media that led to the increased commercialization and de-spiritualization of Navratri, is now mocking Hindu society for the same.

So, does LoveYatri (aka LoveRatri) offend Hindu sentiments? Lets go with what the trailer has to show-

1.) The ‘hero’ is an ambition-less boy (Salman’s brother-in-law Aayush Sharma makes his debut) whose only interest appears to be training other college students in Garba dance.

2.) Hero meets UK-based girl who has come down to Baroda, Gujarat during Navratri.

3.) Hero’s father tells him to use the 9-days he has with the girl to win her heart. Rest of the story is the usual Bollywood routine.

4.) Trailer ends with tagline ‘Love will take over on 5th Oct’ (date of movie’s release).

Navratri this year falls from 10-18 October. It can be nobody’s argument that the move is NOT blatantly trying to ride the Navratri festival craze. The movie depicts the festival as an opportunity for hitting on & wooing girls. So ask yourself – is that the way Navratri and Garba is seen by practising & believing Hindus? A festival which is about devotion, celebrating the feminine divine, and coming together as a community – should it be reduced to just an occasion for something as mundane as romance?

Of course, deracinated, Hindu-in-name-only (HINO) types won’t see anything wrong with the movie – for them, Navratri is no different to a Sunburn music festival as a chance to check out the opposite sex, except that they probably see the Garba ‘dress code’ as quaint/funny and the music as ‘boring’. But any believing Hindu who has taken part in a Garba and danced in unison as the aarti to Maa Durga is sung, knows how spiritually uplifting it can be. So whose sentiments should really matter in this case?

Its easy to say that one should ignore the movie if you are disturbed by it. But how can you ignore a mainstream Bollywood film which distorts something beautiful and close to your heart, and which will be watched by millions and seed the thought in more young Hindus that Navratri is merely a time for partying?

The movie, directed by Abhiraj Minawala, was criticized for distorting the meaning of Navratri by the usual, much-abused Hindu groups like VHP etc.  Later, a Bihar court ordered an FIR to be lodged against co-producer Salman Khan, saying the title hurts religious sentiments and promotes vulgarity. In response, the film-makers changed the title from “Loveratri” to “Loveyatri”. And that was about all that the unwashed, practising Hindu masses could expect.

With Supreme Court’s blanket protection, the movie will now go ahead smoothly, and doubtless several unsuspecting Hindus will flock to the movie theatres oblivious to how such movies gradually de-Hinduize our society. But if even 10% of the potential audience of this movie desists from watching it, it will go a long way in breaking the vicious circle of Bollywood-ification which is harming Hindu society today.