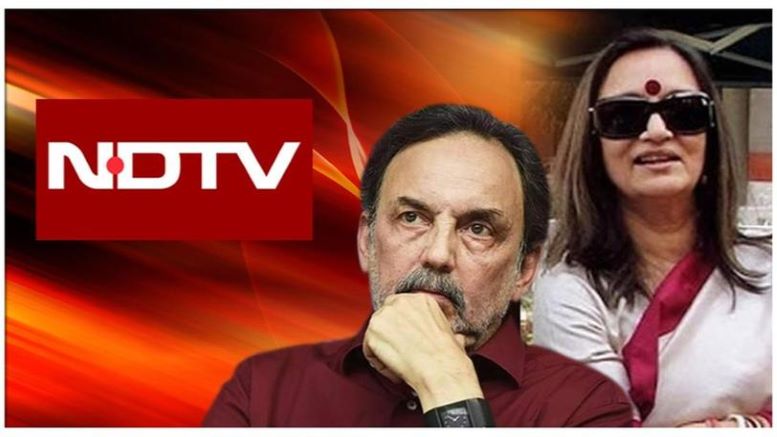 NDTV promoters Radhika and Prannoy Roy received temporary reprieve from payment of INR 27 crores imposed by SEBI (Securities and Exchange Board of India) in December last year. The penalty was imposed as the Roys and their holding companies were alleged to have violated several security norms as they withheld loan agreement information from shareholders.

Reporting on the court proceedings Live Law has said that a bench comprising of Justices DY Chandrachud and MR Shah has directed the appellants to cooperate so that the appeals against SEBI order that has being listed for final hearing on April 6 can be speedily disposed.

Senior Advocate appearing for the Roys pleaded that running a TV channel was a difficult proposition as it required lot of money. NDTV was being run by husband and wife Prannoy and Radhika Roy whose loan amount of INR 375 crores taken from ICICI was repaid by VCPL.

He further said that the Roys are repaying VCPL but since they are not being charged interest by VCPL, it has been construed as transfer of control of NDTV to VCPL. It was being argued that the Roys were unfairly penalised as they hadn’t transferred control of NDTV and both husband and wife continue to be shareholders of NDTV.

“It is not an allegation… There is 100 page decision of SEBI. Every time, the argument is that it is NDTV, Pranav Roy, Radhika Roy. They are not a separate class who deserve a separate treatment. The violations are of very serious nature. They are saying that they have not transferred the shares! Their shares are worthless! There is a reasoned and speaking judgement! There is a direction by a statutory regulatory body that penalty has to be paid! The Tribunal says that it is not a pre-deposit but one cannot challenge a money decree without some deposit. This is that ‘some deposit’…This has been a practice in the tribunal! I would be guilty of not opposing the present appellants when I have opposed others!”

Rohatgi opined that since it was a penalty and not a decree, it could be stayed while pointing out that the same authority had earlier found no irregularity and even admitted that the case was fit for a stay. However, the SG counter-argued that half-truths were being placed before the bench and that TV journalism doesn’t constitute a class by itself which should be treated in a privileged manner.

The 52-page order of SEBI said that there were clauses and conditions in the loan agreement that substantially affected the functioning of NDTV. Furthermore, the order also pointed out that VCPL was given powers to indirectly acquire 30% shares of NDTV through conversion of warrants into equity shares of RRPR Holding as laid down by one of the terms in the loan agreement.

Also, clauses pertaining to NDTV in the loan agreement concealed material and price sensitive information from minority shareholders. According to SEBI, the Roys and RRPR Holding have violated provisions of PFUTP (Prohibition of Fraudulent and Unfair Trade Practices) norms.

The current relief granted by the apex court comes after a February 15 order by a SC bench headed by CJI SA Bobde which had exempted the couple from making a deposit before the Securities Appellate Tribunal (SAT) in a case related to insider trading.