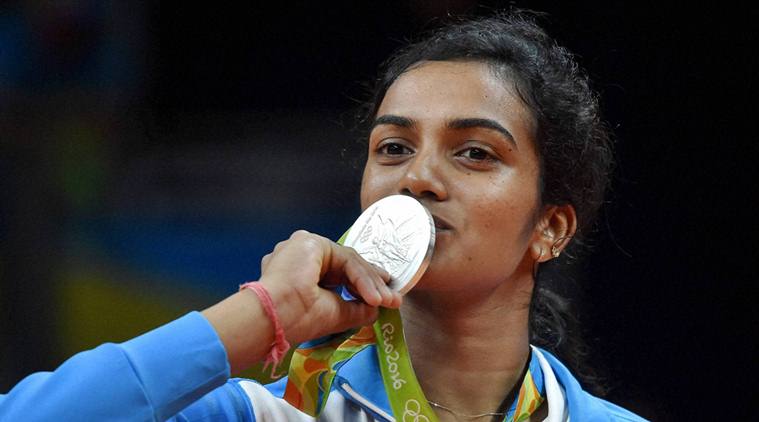 While the whole nation is celebrating PV Sindhu’s historic achievement in the Rio Olympics, trust our media to defile even this moment of joy by introducing their pet ‘caste angle’ in to the story.

“Searching for Sindhu’s caste” is the headline which greeted readers this Sunday morning on the Times of India’s front page. The report says that one of the ‘most searched’ terms on Google during the badminton final was “PV Sindhu caste”. Picking up on this juicy lead, ‘journalist’ Kim Arora then breathlessly rushed to eminent social scientists for their views on this phenomenon and extracted the desired quotes to complete her ‘story’.

TOI’s sister publication Economic Times (ET) published an article which starts with “India loves PV Sindhu, but Indians love caste more, says Google.” Not to be left behind, Indian Express says “PV Sindhu’s caste highly searched on Google, reveals ingrained biases of India.” This ‘news’ has now spread like wildfire and even made it to regional media.

It is not a simple exercise for a layman to determine what phrase or keyword was most searched at any point of time – if one looks up the keyword “PV Sindhu caste” on google.com/trends, we don’t see much data. Google AdWords offers a Keyword planner tool, but that is available only for paid users. The track record of journalists at fabricating data, and their general incompetence at doing data-based stories raises enough doubts about the veracity of this story as well.

But even if we give media the undeserved benefit of doubt, their arguments don’t hold water. ET claims 9 lakh Indians were on Google looking up for Sindhu’s caste. Now, there are around 450 million internet users (33% penetration) in the country, and many would just be glued to their TVs to watch Sindhu’s final match. Even assuming the 9 lakh figure dished out by ET is true, how does a mere  0.2% of the online population allegedly interested in the player’s caste translate into  a statement like “India loves PV Sindhu, but Indians love caste more”?

This OpIndia report debunks the media lies around this issue. And now, some in the media have also acknowledged that they were wrong.

Good blog telling why we went horribly wrong with the PV Sindhu caste story. Note to self: do not do data stories https://t.co/FRDAqxoews

Our media, especially the English language media, has time and again demonstrated a proclivity to thrust the caste angle into each and every issue, even going to the extent of fomenting caste discord where none exists. This example of a news story from Rajasthan proves how media distorts and incites. As Rajiv Malhotra says in the introduction to his book ‘Breaking India’ –

” I have been involved in numerous debates in the US with think-tanks, independent scholars, human rights groups and academics, specifically on their treatment of Indian society as a sort of scourge that the west had to ‘civilize’. I coined the phrase ‘caste, cows and curry’ to represent the exotic and sensational portrayals of India’s social and economic problems and the interpretation of these as ‘human rights’ issues.”

The British colonials had a strategy of projecting Hindu society as fractious, superstitious, corrupt and barbaric, while suppressing positive aspects like focus on a wholesome human life through the 4 puruṣārtha, mutual respect for different spiritual paths, achievements in maths, science, medicine etc – their goal was to breed inferiority complex in the Hindus and keep them in perpetual self-loathing, to make it easier to rule over them.

Thomas Babbington Macaulay, the father of the ‘modern’ education system in Bharat, had declared in a Minute that the goal of the “Education” in Bharat should be to create a class of clerks, who would serve the British commercial and governmental interests that were expanding exponentially. The graduates of the new
schools, Macaulay insisted, would be “Indian in blood and colour, but English in tastes, in opinions, in morals and in intellect.”

The products of this Macaulyan education system, today’s intellectual sepoys, carry on the agenda set by the new-age colonials such as the Donigers and Pollocks. These deracinated, rootless sepoys dominate the social sciences & humanities departments of our Universities, and have hijacked the field of English language journalism. With role models like Barkha Dutt, Rajdeep Sardesai, Sagarika Ghose, Shekhar Gupta etc, it is not surprising that most journalism graduates today represent empty shells with superficial knowledge and a penchant for catchy slogans and sensationalism.

The deeply indoctrinated Hinduphobia is exemplified by this ‘analysis’ of Bharatiya sports by a product from the Columbia school of journalism, whose Twitter bio reads “Journalist @AJEnglish. Dreamer. Believer. Insomniac. Travel Junkie. Wanna be Chef. Curious, asks too many questions! @columbiajourn @CNBCTV18News alum”

Despite several people pointing out that the contact sport of wrestling is now the number # 1 sport as far as Bharat’s Olympics all-time medal haul goes, the above specimen did not retract her bigoted views. And who will explain to such ignorant journalists that Bharat was unbeatable in hockey till the time the sport was played on grass; and after the lows of the last 2 decades, our hockey team is again looking up – the ups and downs in their performance are not caste related!

Media is considered as the fourth pillar of a democracy. Its role is to hold a mirror to society and be objective and unbiased while reporting. True, caste based discrimination is a reality in our society and is a evil that has to be fought by one and all. But to aggravate the caste fault lines by hyping up such dodgy news stories reeks of a Hindu bashing agenda. If there is indeed a tiny faction of crazy casteists who are indeed obsessing with Sindhu’s caste, arent we better off ignoring such elements rather than extrapolating their actions to indict all Indians? Who gains from such national shaming, at a time when we should instead be celebrating the success of an unassuming 21 year old shuttler? And while such caste atrocity stories are peddled ad-infinitum, the same social crusader journalists become strangely muted when stories related to Islamic or Christian intolerance emerge.

It speaks volumes about newspaper editorial judgement when stories like ‘Sindhu’s caste’ & anything related to current flavor of the month ‘cow vigilantism’ dominate headlines while more substantial issues like the MP flood crisis, Mulayam’s explosive confession of having obstructed justice in the Bofors case during his time as Defence Minister, Karnataka Government gunning for closure of a top-notch private school like National Public School Bengaluru using the flawed RTE, Maharashtra’s breakthrough reform of freeing farmers from clutches of APMC etc, are ignored or relegated to inside pages.