Outlook magazine is well known for its controversial, left-liberal, Hinduphobic and biased journalism. But it sunk to hitherto unknown depths when it accused RSS and its affiliate organizations Rashtra Sevika Samiti & Sewa Bharti for ‘child trafficking’ by providing hostel and education facilities for girls from the North East in other parts of the country.

Rashtra Sevika Samiti’s Pramukh Karyavahika Annadanam Sita issued the Press Release. Rashtra Sevika Samiti said that the article which appeared in Outlook is totally baseless, false and defaming the organisation. Rashtra Sevika Samiti is working for social welfare since last 80 years with selfless service motto, and all forms of activities carried by the Samiti are totally within the country’s legal framework, said Annandam Sita. Below is a translation of the Press Release, as provided on samvada.org:

The article under the heading “Juvenile trafficking of girls by Rashtra Sevika Samiti” as alleged by Kum. Priyanka Chaturvedi & Kum. Shoba Oza (Spokesperson All India Congress Committee) in today’s (30/7/16) Outlook magazine is totally false & absolutely irresponsible. Even the Cover story is false without evidence & misguiding in nature.

All the Chatravaas ( hostels) that are run under the guidance of Rashtra Sevika Samiti are Legal & are under constant vigilance.

Therefore Rashtra Sevika Samiti vehemently condemns the Spokesperson of AICC, Editor of Outlook & author Neha Dixit. Such cover stories in prominent magazines which are reaction based shows their political incompetence.

The information provided by AICC & Outlook is totally baseless. It is a strategy to stigmatise / defame the Selfless service, character building and the motivating patriotic values continuously done by Rashtra Sevika Samiti for the past 80 years.

Rashtra Sevika Samiti, therefore demands an unconditional and immediate apology from the above mentioned organisations, lest we are ready to take Legal action.

One hopes that RSS follows through with legal action – an apology is unlikely, and even extracting an apology from repeat offenders like Outlook will not deter them from their brand of yellow journalism. Unless the full weight of law is brought to bear on the author of this piece and the Outlook editor, these unscrupulous elements will just get more emboldened to continue with their hit-jobs against RSS and Hindu Dharma.

Outlook was launched in 1995, with the controversial Vinod Mehta as the Editor in Chief, and rape accused Tarun Tejpal (who later went on to launch the virulently anti-Hindu Tehelka newsmagazine) as the Managing Editor from 1995-2000. This was the cover of the first issue of Outlook in 1995 – One of the most consistent contributors for Outlook is Arundhati Roy – the lady who believes that the state of Bharat is the most oppressive entity on the face of the Earth, and who supports all sorts of separatist movements – from Kashmir’s ‘azadi’, to the Naxalite ‘revolution’. Lets look at a few of the other covers from Outlook, from recent times –

Outlook’s current Editor-in-Chief, Krishna Prasad, is another one of the ‘progressive’ editors from the Tarun Tejpal/Shekhar Gupta/Barkha Dutt school of Lutyens journalism for whom the native Dharmic roots of this country are anathema, and imported ideologies like Communism/Western Universalism/Christianity/Islamism are preferable. And true to his ilk, Krishna Prasad is a known Modi baiter who it appears still hasn’t reconciled to the trust placed in Narendra Modi by the masses. Sample a few of his recent articles in his rag – 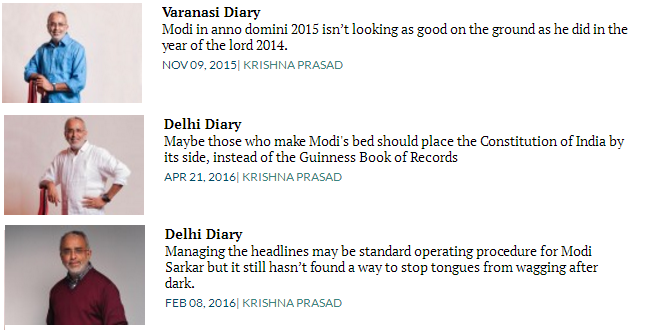 And this is not the first case of baseless, defamatory, yellow journalism involving Outlook. 3 recent examples of their brand of wink-nudge, salacious, shoddy journalism are –

1.) Dec 2015: Outlook wrongly attributed a quote given by Shri Ashok Singhal to Home Minister Rajnath Singh, to spice up their ridiculous cover story ‘The Pakistan-isation of India’. They were made to offer a grovelling apology –

“Outlook deeply regrets the lack of diligence in verifying the source of the statement.

It was not our intention to denigrate the home minister or Parliament. Outlook sincerely regrets the embarrassment caused to Mr. Rajnath Singh.”

But it is clear that the apology was insincere as Outlook is back to its old tricks with the latest ‘Baby Lift’ story. Only swift legal action will give a clear message to this Lutyens media mafia.

3.) April 2015: Outlook did a sexist, hypocritical hit-job on then-HRD minister Smriti Irani, in an article by Saba Naqvi – one of five articles as part of a cover story package on the ‘fading fortunes’ of Irani.

Magazines like Outlook and TV channels like NDTV have been rejected by all sane Bharatiyas. But we should not underestimate their ability to harm the nation through their agenda of lies, deceit and pure hatred. While one must appreciate RSS’ measured reaction to a vicious hit-job against them, in contrast to the violence with which Muslim organizations react to real/imagined slights by media, there is no doubt that unless there is punitive action against crooked elements in media they will not cease their agenda against Hindus.