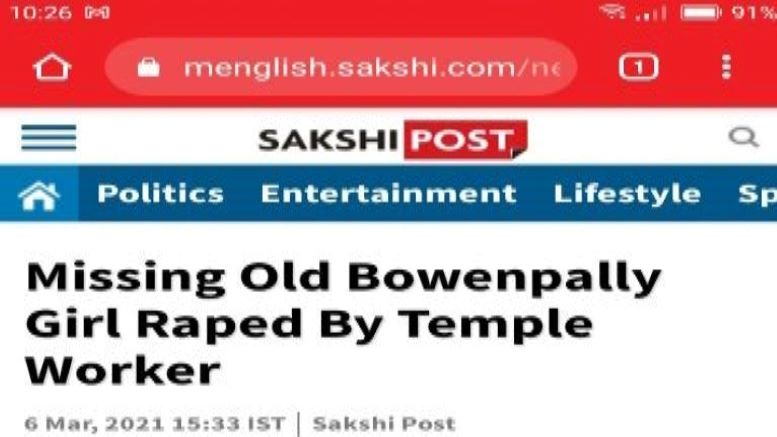 Continuing the tradition of Hindumisia Bharatiya media is known for Telugu daily Sakshi Post, owned by Andhra CM Jagan Reddy’s wife YS Bharati, ran a now-deleted news report regarding the rape of a teenage girl. The twist, however, lies in the fact that despite the rapist being a mosque worker Sakshi Post headline replaced the word mosque with temple thereby displaying its Hindumisia (Hindudvesh).

The incident pertains to Old Bowenpally where a 16-year-old girl belonging to the SC community who had gone missing being repeatedly raped by 25-year-old Irfan hailing from Sangareddy district and working at a mosque. The case is one of grooming as Irfan who came in contact with the girl three months ago trapped her in the name of love and repeatedly raped her.

As per available information, the girl was headed to Guntur on March 3 without informing her family members and Irfan was to follow her there the following day. In the meanwhile, the police swung into action on the basis of the complaint filed by her family members. Their investigations led the police to arrest Irfan based on CCTV footage. The entire case of rape of the teenager came to light during Irfan’s interrogation.

The girl was subsequently taken into custody from the Guntur bus stand as per information revealed by Irfan during the course of interrogation and handed over to her family members. Irfan has been booked under POCSO and SC/ST Atrocities Acts and remanded to custody by the police. Further investigation in the matter is ongoing.

The height of dishonesty practiced by Sakshi Post is apparent when it says Irfan is a temple worker. Hindumisic media has always tried to cover up Abrahmic crimes and almost always twisted the narrative on the basis of the religion of both victims and the accused.

We are all well aware of the fact that Bharatiya media often uses pictures of Hindu sadhus even when a crime is committed by a padre or maulvi. Additionally, headlines are often twisted to either make the religion of the perpetrator obscure if the person is an Abrahamic or worse insinuate that the accused is a Hindu as has been done by Sakshi Post.

As is apparent from the TOI (Times of India) headline, picture, and article content generic terms and pictures of a Hindu sadhu have been used even though the accused is a Muslim. TOI is not the only media outlet to do so and almost the entire English media as also several regional media houses are guilty of having twisted the narrative to present Hindus and Hindu Dharma in a negative light on numerous occasions.

Further, the media often tries to misrepresent news related to Abrahamics to present them as victims even if that is far from the truth. The local media news is then picked up diligently by their international counterparts who are on a Hindumisic mission then use such news items to show how Bharat and Hindus are ‘intolerant’ towards Christian and Muslim minorities.

That Sakshi Post which ran the highly misleading report belongs to Christian evangelical CM Jagan Reddy’s wife comes as no surprise considering the increasing attacks Hindu Dharma is being subjected to in Andhra Pradesh under the Jagan Reddy-led YSRCP government. Even though the news report has been deleted it doesn’t absolve Sakshi Post which aimed to mislead the public with its highly Hindudveshi agenda. There has to be a system in place to penalize media houses for such misleading reports.