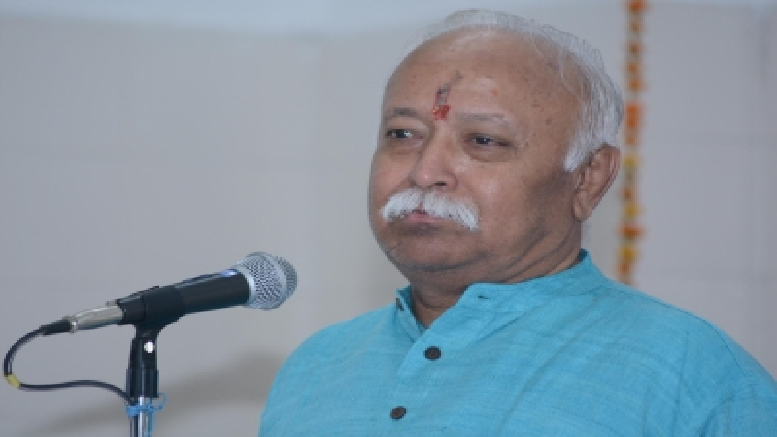 Rashtriya Swayamsevak Sangh (RSS) chief Mohan Bhagwat on Monday joined the “Seng Khasi” (indigenous vanvasi faith) for a prayer at the sanctum sanctorum of the sacred peak, U Lum Sohpetbneng (Navel of the Universe), atop the 1,344-metre high peak, for the well-being, growth and prosperity of ‘Ka Mei Ri India’ (Bharat Mata) and all her citizens.

RSS sources said that the prayer was offered by the head priest of Seng Khasi, Skor Jala, and culminated in rituals unique to the indigenous faith, Niam Khasi, where Bhagwat participated.

Sanctified rice was distributed and the RSS chief ended the brief solemn occasion by planting a sapling within the sacred precincts.

Seng Khasi is a socio-cultural and religious organisation formed on November 23, 1899 by sixteen young Khasi men to protect, preserve and promote the indigenous way of life and religion of the Khasis.

It was 123 years later that the Seng Khasi has grown to more than 300 branches across the Khasi Hills and continues to endeavour in its cause in bringing pride to the people by strengthening their roots and identity, the RSS source said.

Bhagwat in his very brief speech expressed his profound gratitude at having experienced Monday’s ‘darshan’ and said he would carry forward the sacred message in the whole country of U Lum Sohpetbneng, that the golden bridge that connects Man and God now lives within a golden heart.

The summit of U Lum Sohpetbneng, about 16 km from Shillong, is believed to be the spot where a golden bridge connected man to the heavens.

The RSS said it is believed that 16 families traversed between the two worlds until seven remained on the Earth forever to take care of ‘Mother Earth’ and to earn righteousness and propagate the truth.

The RSS chief left Shillong for Guwahati on Monday afternoon for further deliberations.

Since Saturday, he has attended a series of events, including the meeting of RSS functionaries and workers across the hill state.

Bhagwat during his three-day visit to Shillong attended a series of meetings and events, where several BJP leaders, members of Hindu organisations, intellectuals attended the events organized by the Meghalaya unit of RSS.

Bhagwat’s visit to Meghalaya — a Christian majority state, assumes significance as Assembly elections are scheduled to be held there in February next year.

Elaborate security arrangements were made in the state in view of the visit of Bhagwat, who has a ‘Z Plus’ security cover.