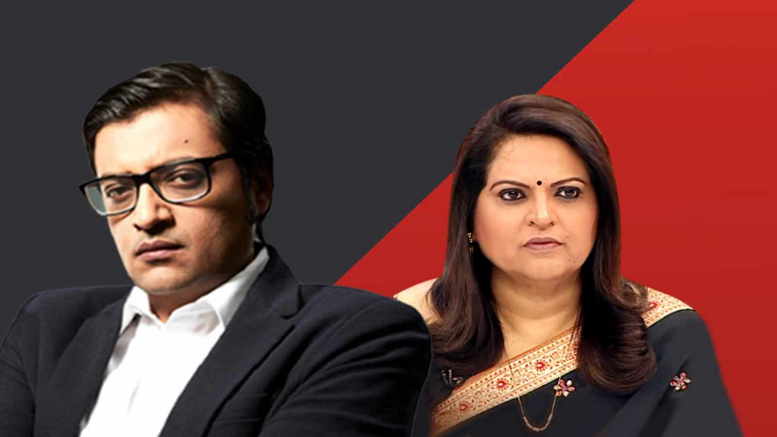 The parent company of the Republic TV has filed a defamation complaint at a Delhi court against Times Now anchor Navika Kumar for allegedly making defamatory remarks against Republic TV and its founder in connection with the alleged WhatsApp chats mentioned in the chargesheet filed by the Mumbai Police in the TRP scam case.

The complaint filed by ARG Outlier Media Private Limited alludes to the statements made by Navika Kumar relating to the chats of Republic TV Editor-in-Chief and founder Arnab Goswami on her show on January 18.

The company submitted that the defamatory show had over 85,000 views in addition to the live telecast at prime time in the satellite television, and “the scale of defamation faced by the complainant company is irreparable”.

It further stated that it is not only an utter fabrication of facts and outright falsehood, but is also a defamatory statement made to a large universal audience in order to prejudice their mind, eclipse them from true facts and influence them through the wholly misleading broadcast.

“By misusing, misconstruing and distorting the documents from the Mumbai Police’s chargesheet in the TRP scam case, mainly the WhatsApp Chats, the accused person has gone on a reckless spree to spew grossly defamatory material,” the complainant further said.

The ARG Outlier Media Private Limited also went on to say that the accused is jealous and the lack of ability of the accused to match the success of the complainant’s company has caused this defamatory show to be aired.

The complainant emphasised that Navika Kumar cannot be permitted to steal a march over the adjudication process and pronounce someone guilt by elevating itself a parallel adjudication forum as the trial has yet not begun.

“Two chargesheets have already been filed but the investigation is still ongoing. Trial has not yet begun, and the complainant company is factually innocent and also presumed innocent until proven guilty. The matter will be decided in accordance with law and no third-party interloper can be permitted to preempt the process of law,” it said.

The company has requested the court to take cognizance of the complaint and give punishment to the accused in accordance with the law for the commission of offence under Sections 499 (defamation) and 500 (Punishment for defamation) of the Indian Penal Code.

The case will come up for hearing before the Patiala House Court on February 2.

Were Arnab Goswami’s chats deliberately leaked to malign and trap him?