Rajdeep Sardesai makes a fool of himself, again 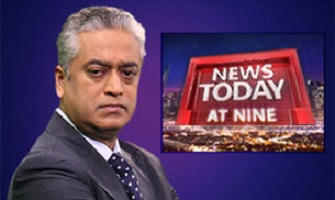 This article is not about Rajdeep Sardesai, per se, but about a whole ecosystem, primarily in Lutyen’s Delhi, that he is a part of.  An essential feature of the members of the ecosystem is that their primary objective is to do everything possible to live a rich life-style, and not one where they feel it necessary that they should go about this task in a professional and ethical way.

“Only in India would channel being funded by an NDA MP call itself ‘independent’ or a VC join an election roadshow and Univ be ‘autonomous’!”

What was the source of this information about the Vice Chancellor of the Banaras Hindu University is not clear.  However, an article on OpIndia tells us how these tweets were picked up by others with the same ideological orientation as Rajdeepji, namely an intense hatred for Hindutva in general and Narendra Modi in particular.

An attempt to create a fake news was very quickly demolished by the members of the Internet Hindus, and a statement by the Vice Chancellor himself.  And, Rajdeepji had to tuck his tail between his legs and run for cover.  On March 5 he tweeted:

“The pics of BHU VC at Modi roadshow have turned out to be case of ‘mistaken identity’.  Apologising to him and withdrawing tweet.”

For a very long time, this type of creation of fake news has been a consistent feature of the ecosystem mentioned above.  Until the advent of internet, the ecosystem was able to peddle the lies as truths – and they thought the public at large were being fooled.  Because they were able to control the gates of the flow of information in the media, they did not know that their lies were being exposed at the subaltern level. Internet democratised the discussion, and the views of the subaltern, known as the Internet Hindus in Bharat, started to come into prominence.  Whereas each such Hindu earlier thought he/she was alone in his/her thinking, he/she now found that he/she was part of a huge community that has has been expoing the lies of the mainstream media.

This was not the first time that Rajdeepji tried to popularise a lie.  In August last, he thought he had a wonderful handle to demonise Smriti Irani.  Based on another fake report, on 28 Aug 2016 he tweeted:

“So who is the minister who reportedly bought an 8 lakh Ganesh statue from Cottage Industries and refused to pay for it?”

Once again the Internet Hindus, an ever vigilant group, pounced on him, and, in this case too, he had to tuck his tail between his legs and run for cover.  On the next day, he tweeted:

“I deleted tweet on an unnamed minister because it was based on unverified info.  Mistake.  Apologies. Motto is sense above sensation.”

Rajdeepji thought that what he considered was a clever play of words would pacify the Internet Hindus.  But statements like ‘sense above sensation’ do not cut ice, because time and again he proved that there is zero sincerity in them. And he has proved it so comprehensively in his tweets regarding the Vice-Chancellor of Benares Hindu University.

It is necessary to give a couple of other examples of Rajdeepji making a fool of himself.  When the Prime Minister raised the issue of the serious human rights violation by Pakistan in Balochistan, Rajdeepji tweeted:

“When Manmohan Singh allowed Balochistan in a joint statement in Sharm-el-Sheikh, he was attacked by Congress and BJP. Now ‘B’ word part of I day speech.”

This time it was not just the Internet Hindus who picked it up, but also one who would not like to be considered to be a part of this group.  One Rohit Pradhan tweeted:

“Sardesai, that is a nonsensical argument. Balochistan was referred to (earlier) in terms of India orchestrating terrorism there.”

An Internet Hindu had an obvious question.  A.B. tweeted:

“Do you think Rajdeep is dumb or playing dumb?”

To which Rohit Pradhan said:

Another one was on the attempt made by some Kashmiri Islamists to raise ‘Azadi’ slogans in a programme by Amnesty International.  On the  issue,  Rajdeepji tweeted:

An Internet Hindu, Kiran Chandrashekar, enlightened him with the correct fact, when he tweeted:

“Saredesai, please get your facts right. FIR was for making anti-India statements in the Kashmir meet and not for organising Kashmir meet itself.”

When one has a strong position on an issue, one tends to look favourably at any input that comes one’s way that reinforces one’s perspective.  It is really a case of wanting to believe than really believing.  To this extent, one cannot blame Rajdeepji for this malady.  But he claims to be a journalist and an informant about what is happening in society.  Some of his readers/viewers may be thinking of him as an unbiased informant and thus believe what he says.  When he fails to go even a little bit beyond the input that he gets, and makes no attempt to verify it, he obviously has failed in his dharma to his profession.  It is for him to decide whether he wants to continue to play dumb, and thus continue to make a fool of himself.

In the recent past, Rajdeepji and the members of his ecosystem have mounted a programme to control the social media.  The head of Twitter India, Raheel Khursheed, is quite busy suspending the accounts of the members of Internet Hindus, particularly if they are critical of Arvind Kejriwal.  This attempt of censorship not only receives no public attention of the ecosystem, but I am sure that privately they will be actually applauding the use of such tactics.

The ecosystem is deeply scared of the democratisation of the public discourse, because they find that their lies of the past have been exposed, and that if they continue to lie they will be exposed.  Their pecuniary house-of-cards is collapsing.  Along with this, the assiduously created image of controlling the discourse is now seen to be false.  So, the ecosystem is scared – very, very scared.

Then there are  questions to be asked of the owners of the institutions that employ Rajdeep ji and others.  For the sake of the credibility of their institutions, should they really be having such people on their rolls?  And, if they do, and their clients think bad of them, can they really blame the clients?  If this state continues, the disgust of the Internet Hindus against such institutions will keep on mounting, and eventually it will also reflect against the owners.

Then there is the responsibility of the institutions to those who directly pay for their survival – namely the advertisers and the subscribers.  Are the owners doing proper justice to them also?

As I said at the beginning, this article is not just about Rajdeep ji per se.  The whole ecosystem has to awaken to what is happening.  Coining new terms like ‘post-truth’ to dispute the facts that are exposing their lies does not cut ice any more.  The people at large have always been well-informed about what affects their lives. Like Indira Gandhi, who because of her censorship did not know the anger of the people at large against her and her policies, the ecosystem should know history well enough to know what will happen to them.

To remain relevant, and for doing their dharma towards the society and the nation, the members of the ecosystem should stop pretending that they are still asleep.