Radio Mirchi’s RJ Sayema, who has always taken pride in being a Muslim first, has surpassed the limit of public patience this time. No, it is not the first time that the Radio Jockey employed by the popular radio station has exhibited her questionable politics. But this time she was joined in by a fellow Muslim Radio Jockey, RJ Fahad, and the two are baring their fundamentalist leanings & inciting violence over CAA-NRC in perfect synchronization. The tweet above by RJ Sayema is on Kashmir. She writes “Whole Hindustan is becoming like Kashmir, because when Kashmir was suffering we kept quiet.” And if you thought the lady is talking about the suffering of Kashmiri Pandits who were driven out of their homes, or the bloodshed the region has suffered for the last 30 years due to Pak-sponsored Islamic terror, think again.

The ‘suffering’ she is referring to is the abrogation of the discriminatory Article 370 – a law which gave J&K its own separate Constitution, which boosted separatist sentiment, which discriminated against people of Jammu & Ladakh, and which allowed Islamists to rule the erstwhile state of J&K via the backdoor.

The ‘suffering’ RJ Sayema is talking about is the restriction on internet connectivity and the preventive detention/house arrest of Islamists and rabble-rousers in the valley – wise steps taken by the Union Government to prevent the sort of bloody street violence that has periodically racked the valley claiming 100s of lives in violent protests like the ones seen in 2016 after terrorist Burhan Wani’s death, in 2008 over Amarnath land transfer, in 2010 over a ‘staged encounter’ and the ‘US Quran-burning’.

Maybe it’s the fact that a major achievement like fully integrating the region of J&K with the Indian Union by abrogating Article 370 has passed off without major loss of life & limb, which is ‘painful’ to RJ Sayema. In this, we see no difference between her and an outright Islamist like Ladeeda Sakhaloon. For Islamists, CAA-NRC are just one of the reasons for ongoing violent protests/riots – the real angst is over abrogation of Article 370, the law against instant triple talaq, and the Ram Mandir verdict. The goal is to threaten the Indian state through violence and pre-empt further reforms like UCC (Uniform Civil Code).  Perpetrating violence on others and then flashing the victim card is a game which Islamists have mastered.

Here is a tweet by RJ Sayema inciting a mob to gather in front of the Delhi Police Headquarters, in which she slanders Delhi police for ‘ongoing violence’ against Jamia students. The fact is that police had to control the situation after violence erupted in Jamia university and surrounding area – buses were burnt, stone-pelting done by the violent mob which was seen both inside and outside Jamia Milia university.

Here is another tweet where she endorses calling Bhagwan Ram an ‘imaginary entity’. The proud Muslima has yet to tweet or retweet a statement that those revered in Islam – Allah or his prophet – are imaginary too.

By now, people have had enough of such toxic jibes against Hindus, and the tweet which so appealed to Sayema received some bluntly true replies almost immediately.

Now let’s look at the other Radio Jockey hired by Radio Mirchi to play us sweet songs of love. RJ Fahad is also a documentary film maker and a Nehruvian as per his twitter handle. He decided to send out an ultimatum (some would say it’s a veiled threat) to the government.

“We are withdrawing CAA and NPR in the present form”

can normalize India in seconds.

A law was debated in both houses and passed by Parliament. It has now been challenged in Supreme Court and the matter is sub judice. Everyone has a right to peaceful protest, but all we have seen for the last 2 months is a naked dance of violence and threatening, venomous speeches from Islamists and secularists. There are designated spots for protests in the national capital, but Shaheen Bagh protestors have occupied a major thoroughfare inconveniencing lakhs. Why doesn’t Fahad ask anti-CAA protestors to first ‘normalize’ their appalling behaviour?

Isn’t this tweet akin to blackmailing the government using the bargaining chip of violence by foot soldiers of the anti-CAA camp holding the capital city to ransom? If the Government caves in against street violence on this occasion, what will be the next ’cause’? This same thought occurred to many other netizens as well.

That shall be 1st step towards India becoming an Islamic state.
There shall be protests over Art 370, Ram Mandir etc. followed by demands to reject UCC & PCL.
Sharia shall sneak in form of Muslim law & finally as Indian law within a few decades of massive population explosion.

The above reply in Hindi very perceptively says, “Through this tweet, you are acknowledging that the riots (in Delhi) are being carried out by anti-CAA protestors” (left-liberals have been claiming that the Delhi violence is actually a ‘state-sponsored pogrom of Muslims’.

Or else your violent brethren will continue to burn India?

Here is RJ Fahad peddling a fake news by sharing the picture of Jaffrabad’s gun wielding Mohammad Shahrukh, suggesting the ‘Right Wing’ and Delhi Police are conspiring to burn the capital city. 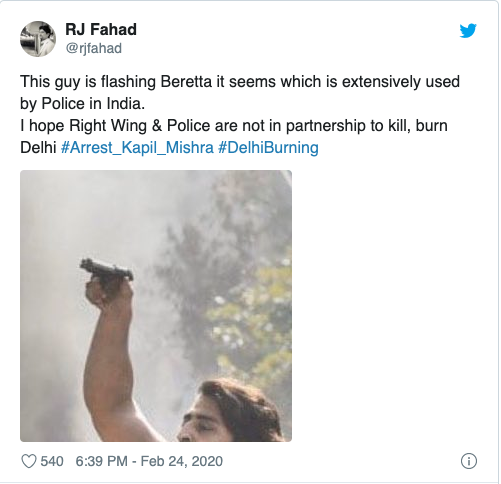 Incredibly, NDTV anchor Ravish Kumar has tried to pass off this shooter Mohammad Shahrukh as ‘Anurag Mishra’, so the entire Islamist-liberal lobby’s agenda is clear for all to see.

The legendary patience of Hindus has begun to wear out and people have started to boycott Sayema and Fahad’s radio station.

I have stopped listening to @RadioMirchi because of @MirchiSayema !

RT if you also don’t listen to radio mirchi at all in your cities.

People are questioning Radio Mirchi on their choice of employees.

@RadioMirchi wht is this nonsense. Is this the freedom of expression or the fanaticism. Yesterday also her tweets were obnoxious calling for mobilization of the rioters against police buildup.And they blame others 4 Islamophobic. @HMOIndia when will u wake up.

After realizing that Naseeruddin Shah, Farah Khan, and Javed Akhtar of Bollywood would persevere and protect their Islamist brethren at any cost, we now come to discover that the radio industry is no different. All avenues of public communication are controlled by this ecosystem.

Radio Mirchi is run by the Times group. It is incumbent on Times Group to understand that the role of an RJ comes with a set of responsibilities. They are speaking to the public.

It is clear that RJ Sayema and RJ Fahad have misused and abused their positions of privilege. They have used the public platform offered to them to consistently lie, misrepresent facts and create communal disharmony. Inflammatory and inaccurate messages have been sent out from their official Twitter handles at a time of extreme sensitivity due to gross distortion of laws like CAA-NRC.

After receiving massive criticism from netizens, RJ Sayema is trying to win back her lost popularity by sending out messages of harmony. But it is too little, too late. People have seen her real face beneath that pretty smile, and it is ghastly to say the least.