There has been tremendous pain and fear among Hindu listeners of National Public Radio (NPR) over an incredibly insensitive, intolerant, and religious supremacist tweet from an NPR producer (and coauthor of several recent NPR articles on Bharat):

This producer has since apologized, and NPR has shared with concerned Hindu organizations that she has also resigned from NPR. 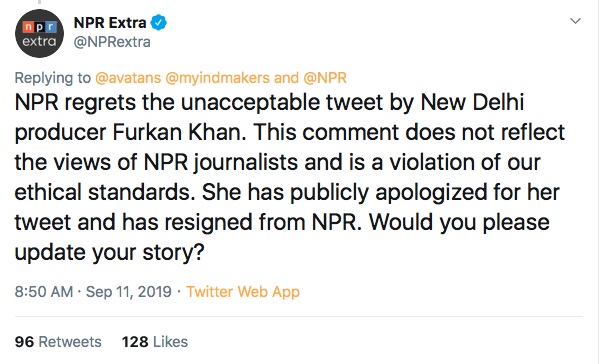 It is important, however, for media organizations, particularly those that believe themselves to be professional, objective, and I might add, post-racist, to not simply move on with a token apology and a scapegoat but to seriously introspect about the kind of extreme bigotry and bias that has come to be normalized in their depiction of Hindus and Hindu Dharma.

I have written about some of these biases in the New York Times, and also in NPR, in the weeks leading up to Bharatiya elections here. As a student of media, I am deeply concerned by the systemic nature of the problem, and believe that the label “Hindu” has essentially devolved in these institutions into a pretext for unbridled racism and genocidal intent, which are all seen by their in-house cliques as “just the facts” on something called “Hindu Nationalism” and the like. By all means, a precise and honest account of politics in Bharat would be not just acceptable but also desirable in an honorable journalistic culture.

“Cow-piss”: The Favored Slur of Genocidal Killers and Apologists

However, what journalists have stooped to, on more than one occasion (as the NPR producer did) is to essentially normalize the language of genocidal killers like the JeM suicide bomber who killed 40 Bharatiya men in Pulwama, as acceptable forms of humor on social media. Slurs about cows and urine have been routinely tweeted by professors in Europe and America, and by famous journalists in Bharat as well. And the fact that 40 human beings were blown up by a fundamentalist for being what he called “cow piss drinkers” does not seem to have changed their thinking even a little bit.

Now it may be the case that journalists like NPR’s Lauren Frayer who has been covering Bharat for the past few months have not (yet?) used anti-Hindu slurs about cows and know better. However, the problem is not simply one of reckless individual abuse of Hindus but also one of systemic exclusion of Hindu voices and lives from the news.

In the case of NPR, the facts are quite obvious. A quick search of the word “Hindu” brings up the following examples (screenshots of first page of results, including several pieces from 2019 and 2018) We have one example of Hindus being ordinary human beings, celebrating a festival, and one of Hindus being deemed worthy of “human rights” status, being acknowledged as victims of Muslim violence in Myanmar. Otherwise, most of the stories consistently focus on “Hindu Nationalism” and essentially produce a broad-brush smear of Hindus as criminals, fundamentalists and misogynists (or eccentrics at best).

This “normal” state of affairs in coverage of Hindus should be alarming (and I am not even entering here into a closer reading of patterns of exclusion and bias in these stories such as who is quoted, who is individualized and humanized, and who is merely presented as part of a “mob”) to anyone who understands that this sort of skewed portrayal of a postcolonial community and people of color is something that liberal journalists really would not carry on with at all.

To put it simply, if a similar sort of bias showed up in the search results for any other identity group today, most liberal readers — and members of the media professions — would be seriously concerned at the very least. For comparison, I share below the first page of results from NPR for the word “Muslim,” and the contrast with what we find for the word “Hindu” is quite compelling. Several stories here talk about Muslims being victimized by Hindus or others, or deal with Muslims as individuals, as human beings who are accomplished in their fields, for example Genocidal Hinduphobia is NOT “Criticism of Hindu Nationalism”

Readers in the West who often know very little about the complexities of Bharatiya identities and the long and very relevant history of Hindu oppression, resistance and survival against two violent imperialisms of a religious nature, have been seemingly lulled into accepting this skewed picture of Hindu aggression-Muslim victimization in contemporary Bharat as the beginning and end of all that is worth talking about right now.

This has led not only to a shameful situation for many American political figures in terms of their relations with Bharat and with members of the Bharatiya diaspora, but also to an alarming situation for Hindus, who are often told that their concerns about bigotry and bias are just “Hindu Nationalist” myths and everyone loves the Hindu and Yoga and so on.

The facts are quite clear. There is personal bias and bigotry in the media professions against Hindus. And there is systemic professional bias that can be seen in their depiction in media discourses as well. We will be dehumanized no further. I call on Hindus, and all anti-colonial and anti-racist progressive allies, to work towards the elimination of Hinduphobia in the media. I hope NPR realizes that an individual apology is only the beginning of whatever it needs to do to correct its deep, deep malaise.

Postscript: I am disappointed quite frankly that NPR’s chief Bharat’s correspondent Lauren Frayer seems to have outsourced all blame for this shameful episode to her local informant without taking any responsibility for what is obviously the dismal state of ignorance and normalized bigotry in NPR’s India operations. Here are some of Lauren’s especially clueless tweets about Bharat and Hindu Dharma:

Special thanks to Twitter friend @sudeepj21 for spotting this hateful tweet and sharing this with the world.