Nepotism and anti-Hindu censorship exists in both Publishing and Bollywood Bloomsbury India’s last-minute decision to withdraw publishing a book on the Delhi riots due to severe pressure from the left-liberal-Islamist lobby, has thrown the lid right off the intellectual mafia which dominates the publishing industry.

This anti-Hindu clique extends its dominance to academia, arts and the entertainment media arena as well. It is said that ‘sunlight is the best disinfectant’. So the more people who have been at the receiving end of this colonial-era prejudice against Hindus speak up, the better-informed society becomes. We reproduce two twitter threads which shed light on this phenomenon and what can be done to counter it.

The first thread is by Sanjeev Sanyal – an economist and author of books like ‘Land of the Seven Rivers: A Brief History of India’s Geography‘; ‘The Ocean of Churn: How the Indian Ocean Shaped Human History’. He is currently the Principal Economic Adviser in the Ministry of Finance, Government of Bharat:

The death of Sushant Singh Rajput has led a much needed discussion on nepotism and the dark underbelly of Bollywood. Perhaps it is time for an honest discussion on this issue in the context of publishing (although there has been some improvement in last 10 years).

It is very difficult for any “outsider”, irrespective of talent, to get published. Yet, kids of well known writers/ journalists, with clearly no talent, routinely get published. This is followed by gushing reviews in leading periodicals & invitations to literature festivals.

Meanwhile, many of the country’s top writers (like Amish Tripathi) started out self-publishing. Then, there is the murky world of “awards”. This is handed by a tight clique to each others.

Also there is the relentless ideological policing. Even if you get past the “liberal” gatekeepers, the text will be censored at the editorial stage. Copy-editors will routinely replace the word “Hindu” with “Brahmanical”, for instance.

If you think mainstream publishing is dodgy, wait till you wade into academic publishing. Here, the gatekeeping is done with the zeal of Stalin. At least for social sciences & humanities, the term “peer reviewed” means ideologically purified.

Having said all of this, I have been fortunate to have mostly worked with some great editors & publishers. Just like in Bollywood, intellectually honest individuals do exist. However, I also have first hand experience of the murky side.

The second thread is by Prof. Vamsee Juluri, a Professor of Media Studies at the University of San Francisco and author of books like ‘Rearming Hinduism: Nature, Hinduphobia, and the Return of Indian Intelligence’; ‘Writing Across a Cracked World: Hindu Representation and the Logic of Narrative’; ‘Saraswati’s Intelligence’ etc:

Since the writers and the publishers are in the news, here is something that Twitter might want to think more about. How many Hindu writers do you know who do this full time? In contrast, how many ‘Left Liberal’ writers are supported – by grants, corporate and of course readers?

I know the excuses: ‘they ruled for decades we are just starting’ etc. I have heard this for over 5 years now. I have to tell you this is a total cop out at every level. A serious community concerned about survival would not be this tuned out from reality.

The reality is that Hindus get outplayed in the field of communication every day because of lack of knowledge about media, publishing, etc., and blind adulation for business and political leaders over the labor and vision of writers, scholars and artists.

Take this one small example. See this ad on the Left from the 70s for how the Left treats its writers. By contrast, see the ad which we all know now on the Right. There are no titles or introduction to the authors but only the prominence to politicians.

Now Bloomsbury and the instigators went overboard and have egg on the face, The authors who marched out in solidarity should also be thanked for the same. But in the long term whose story will prevail in memory in your children’s memory? The story that bubbles in social media or in books?

I applaud the effort by Sankrant and his Garuda Prakashan to rise to the moment. But publishing is not just about going to print a book at the press and publishing against the diktats of the global MNC giants who inherit colonial era old markets, resources and privilege!

Publishing is a rich cultural practice involving writers, publishing professionals (editors, designers, artists, marketers, etc) and engaged & enlightened readers who know what’s at stake for everyone with those books.

Get a sense of how it works. This is a great study. Note the importance of something called ‘symbolic capital’ in picture 2. It’s what big names like Penguin, Bloomsbury, etc. have – and also sadly hide behind sometimes to sell liars and racist mediocrities to us. 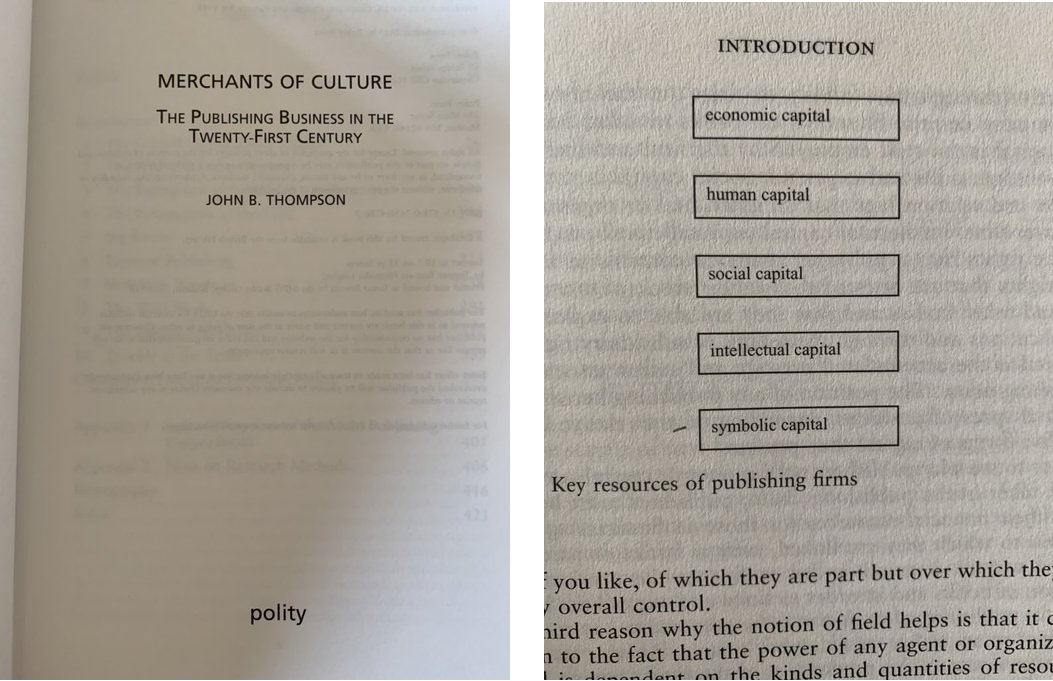 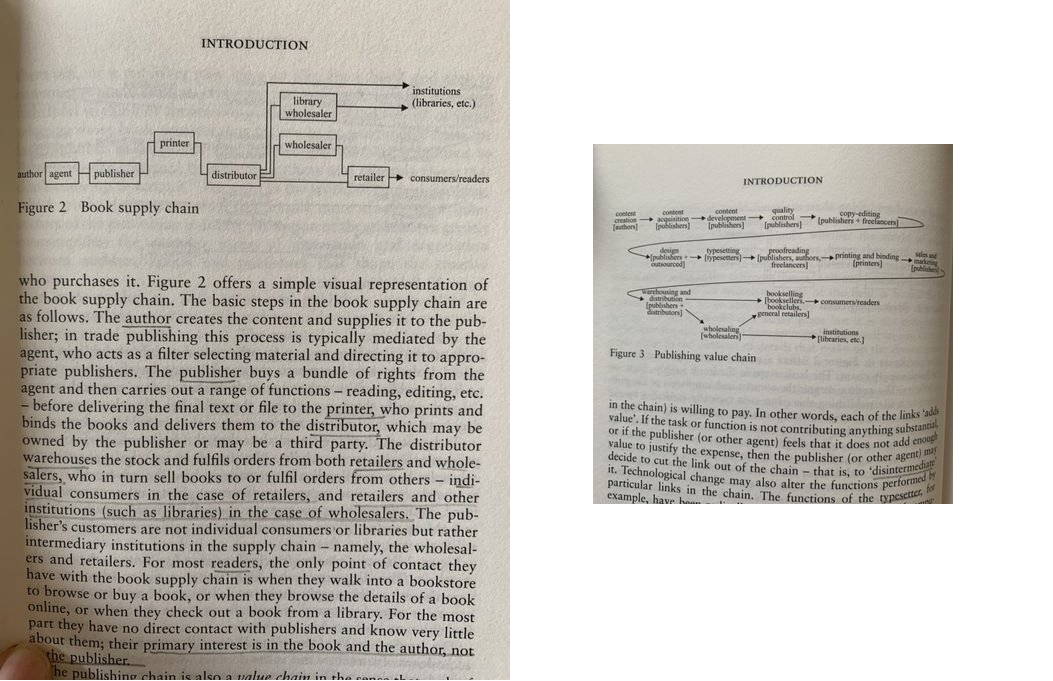 Now symbolic capital/ prestige etc. is often just snobbery used to shut out dissent (like Sanjeev Sanyal wrote recently). But it’s also for those of us in the professional writing community a way to value and encourage each other. It is rarely about the money.

Authors typically get less than 10% of what readers pay for a book as royalties. Many readers and SM (Social Media) consumers who blindly pirate books and share PDFs don’t seem to ever think of that. So in a sense what we are driving towards as authors is not just money but also our share of the symbolic capital that comes with mainstream publishing (and of course the talent and teamwork- I have had great editors, cover designers at Penguin-India and Westland Books).

One story of how this helps fight for truth. During the CA history curriculum mess, in 2016, the S Asia orthodoxy tried smearing Saraswati river points from our side as fringe ‘belief’. All we had to do was to point out who the publisher of this ‘fringe theory’ book was – Prof. Danino & Penguin.

Publishing is a huge world and a prize worth fighting for on every front. It is several centuries older than TV, SM and has staying power & prestige embedded. Smash down the snobbery and racism. Capture the talent and goodwill already out there and build up anew too. But know how.

First of all, know the limits of social media. It’s ephemeral, and in the Hindu case highly nonstrategic too. It is good for noise at best but no match for all that publishing brings. So if you use SM please do so wisely. As more than a vanity or outlet for anger.

Books take years to write. Writers take years of work and struggle to be born. If you think reading is hard, think of what writers do, especially the ones who go up against monsters of racial and religious privilege in the mainstream.

SM for Hindus is warped towards party politics. That’s fine. But don’t mistake this for the real fight out there in the cultural front. Party politics have already messed it up big. VOI, Gita Press, etc., should be flying after 2014. Instead, we had the fiasco of PM Modi going to give an award to a writer of a book smearing the Gita Press (and being snubbed in turn). The political class at the moment is not a friend of the creative or scholarly side of Hindu survival.

I sincerely hope the revolt of the writers will prevail and the systematic silencing of Hindu pain from Aurangzeb to Delhi 2020 will be smashed once and for all – in the mainstream and in full view of the future.

If you wish to take writing more seriously I do have an ebook – Writing Across a Cracked World (available on Amazon). If you think it makes sense to write in a way that reaches people outside your SM bubbles, like your own kids going to mainstream schools for example, please buy it and learn from it.