Som asked Austin, “Do you share the concern expressed by the (US) Senate Foreign Relations Committee Chief that India was trending away from democracy? In a letter to you, he suggested that the crackdown on protesting farmers, intimidating journalists and government critics was problematic. Do you share that concern?”

Side-stepping the question, which was clearly designed to draw adverse comments from a visiting foreign dignitary in order to further NDTV’s Bharat-bashing agenda, the US Defence Secretary replied, “The current President Biden said that human rights and the rule of law is important to the USA. We always lead with our values and as a democracy that is pretty important to us. Again, India is a democratic country, and you treasure your values as well. So, there are a number of things that we can and will work on together.”

The comments Som was referring to are related to a letter dated March 17 written to Austin by the Chairman of the US Senate foreign relations committee, Robert Menendez, a Democrat senator from New Jersey, in which Menendez wrote,

“Getting the U.S.-India partnership right is critical to addressing 21st-century challenges, and that includes urging the Indian government to uphold democratic values and human rights….The Indian government’s ongoing crackdown on farmers peacefully protesting new farming laws and corresponding intimidation of journalists and government critics only underscores the deteriorating situation of democracy in India.”

…Moreover, in recent years, rising anti-Muslim sentiment and related government actions like the Citizenship Amendment Act, the suppression of political dialogue and arrest of political opponents following the abrogation of Article 370 in Kashmir, and the use of sedition laws to persecute political opponents have resulted in the US human rights group Freedom House stripping India of its ‘Free’ status in its yearly global survey.”

Menendez also wrote a joint letter with the Senate majority leader Chuck Schumer to the US secretary of state Anthony Blinken, which specifically asked the Biden administration to raise the farmers’ protest in “future engagements with the Bharatiya government”, and added –

“While we do not take a position on internal Indian policy matters, we recognize and condemn that on January 26, a small faction of protesters engaged in unacceptable violence at the Red Fort in New Delhi, but protest leaders quickly condemned the violence and the vast majority of protesters remained peaceful. However, Indian authorities at different levels of government have used that day’s events as a pretext to undertake a broader and sustained crack down on peaceful protesters, journalists, and government critics.”

The democracy survey by Freedom House, a US government funded think tank with ties to George Soros, is full of holes and half-truths and has been thoroughly debunked by analysts. The Bharatiya External Affairs Minister S. Jaishankar has also dismissed dismissed the negative assessments of Bharat’s democratic status by Freedom House and Swedish institute, V-Dem, stating the country does not need homilies or certification from a ‘set of self-appointed custodians of the world’.

Menendez appears to be regurgitating what propaganda outlets like The Wire and Caravan are spewing, or what quasi-Islamist and pro-Khalistani advisors in Biden’s team are dishing out. Here are a few examples of how he has got things completely wrong –

“Crackdown on farmers”  – This is a cruel joke on those living at Delhi’s borders who have been suffering for close to 4 months now due to the farmers’ protest – arterial roads are blocked, local economies are hurting and people’s daily routines have been thrown out of gear, all when things were just limping back to normalcy after the Covid-19 lockdown. The Modi government has tried all options to placate and appease the farmers – even offering to put the reforms on hold for over an year while farmers discuss the clauses they oppose with an expert committee. Farmers have refused to climb down from their maximalist position, even refusing to submit to the authority of the Supreme Court. Does this sound like  a ‘crackdown’?

“Rising anti-Muslim sentiment and related Citizenship Amendment Act” – This is the biggest Bharat-bashing trope of recent years. Bharat is a country where Muslims are by law given more rights and freedoms than the ‘majority’ in terms of managing their religious institutions, deciding their personal law, running educational institutions, and where the centre and states have separate ‘minority ministries’ pumping huge funds to give scholarships, coaching, business loans etc to Muslims. Hindus have been driven out of many regions like Kashmir, Mewat, Kairana (UP), Bengal’s border districts, and even parts of the national capital Delhi since Independence and after a religion-based partition that created two Islamic theocratic nations, i.e. Pakistan and Bangladesh, on our borders.

Minority Hindus and others in those 2 Islamic nations, and Afghanistan, are facing arguably the worst persecution and ethnic cleansing the world has seen after the Holocaust. It is to offer expedited citizenship to refugees from those two nations that CAA was introduced. And this American Senator has the gall to lecture Bharat, instead of using American influence to knock some sense into its strategic partner Pakistan? This is why, for all his faults, Trump won respect from so many ordinary people in the world, because he had the guts to acknowledge the Islamist threat and speak up against the hegemonic liberal hypocrisy that has come to define American foreign policy.

“on January 26, a small faction of protesters engaged in unacceptable violence at the Red Fort” – Wrong. Farmers had been given permission to hold a tractor rally on a designated route after the Republic Day parade ended. But they reneged on the agreement with police, broke barriers in the morning itself and clashed with police at various parts of the city, not just the Red Fort. They tried to run down policemen with tractors, and one of them died when his tractor overturned while crashing through a barrier. The death of that farmer was falsely blamed on ‘police firing’, an incendiary rumor which many anti-government journalists and media houses actively tried to spread to fuel more violence. Sword-wielding ‘farmers’ attacked police at various locations, not just at Red Fort. And the worst crime at Red Fort, the symbol of Bharat’s sovereignty, was hoisting a religious flag while throwing away the national tricolor. A staggering 400 policemen and policewomen were injured that day! 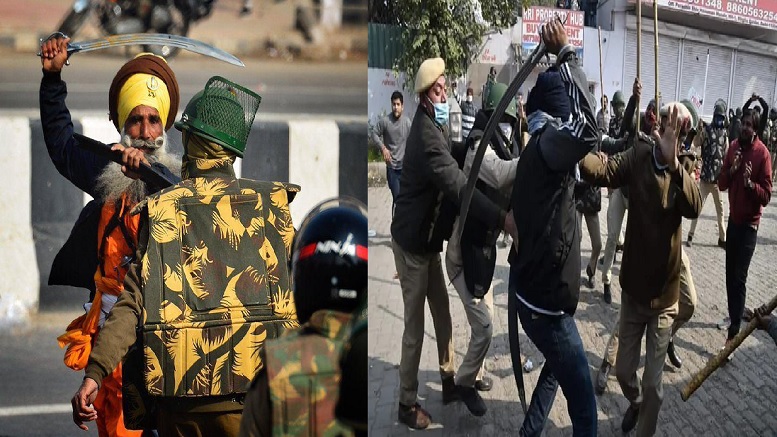 The involvement of America, Canada and UK based Khalistani groups in the assault on the Bharatiya state on 26 January, is now established without a doubt. What have Menendez and other Western leaders done to curb these violent extremists operating from their turf against a democratic nation?

The much-hyped Capitol insurrection in Washington DC lasted a few hours, and US police shot back when they were attacked, killing one of the protestors. Here, the farmers’ have camped out on the capital’s borders for months inconveniencing thousands of ordinary citizens, that too less than an year after deadly anti-Hindu and anti-CAA riots rocked the capital leaving over 50 dead, the said riots having originated in an illegal sit-in protest at Shaheen Bagh.

While the media of any self-respecting nation would have taken umbrage at the collection of lies hurled at it by US parliamentarians and other Western think-tanks, the English-language mainstream media is a different beast altogether. It revels in mocking and defaming its own country and citizens, and craves approval from left-liberals of the English-speaking Western world.

Leading this pack is NDTV, a channel which is synonymous with Congress’ durbari politics that has ravaged this country, never more so than during the dysfunctional 10-year rule of Sonia Gandhi through her proxy Manmohan Singh.

NDTV’s specialty is eliciting suitable statements from western dignitaries, to further their political bosses’ agenda. We have seen this time & again from 2014, such as the bizarre “Will Hindu males alone benefit from India’s economic growth?” question asked of then IMF chief Christine Lagarde at an event moderated by NDTV’s scam-accused boss Prannoy Roy.

Vishnu Som is a shining example of the kind of deracinated, Hindu-hating elite (he allegedly landed his  cushy role in no small part due to his IAS grandfather) with chequered pasts who have come to dominate Indian mainstream journalism.  Rather than stand up for our country’s legitimate national interests, these traitors would love to see the country torn apart and enslaved by foreign powers.

Here is another one from the same stable, who has gotten so unhinged after Modi’s rise that he is now openly asking for direct foreign interference in our sovereign affairs.