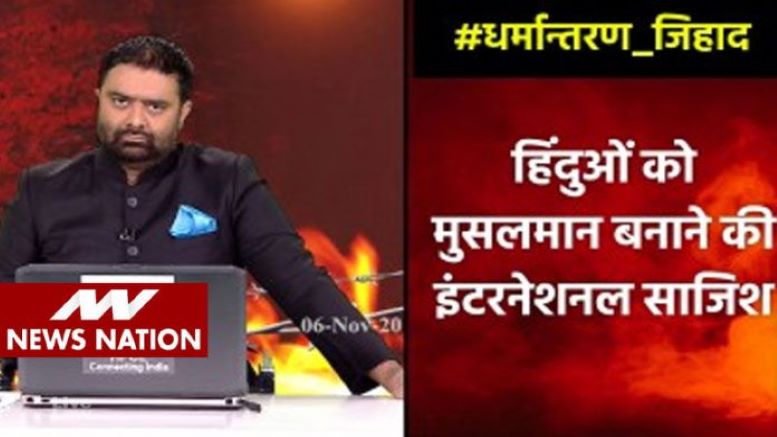 NBDSA (News Broadcasting and Digital Standards Authority) has ordered the News Nation channel to take down the show it aired on conversion jihad. The order passed on November 15 was based on a complaint it received on November 6 regarding the show. It also urged the anchor to be ‘impartial’.

In its order, the NBDSA has also asked the channel to take remedial action and train its anchors in the ‘appropriate’ manner a program should be conducted. The body has also instructed News Nation to take down all videos related to the program from all the platforms within a period of 7 days while adding that the channel should inform the body in writing regarding the same in case the videos were up beyond 7 days. It must be mentioned here that the channel has already issued an unconditional apology for the show.

The NBDSA Chairperson Justice (retired) AK Sikri, observed that whenever any news story is telecast by the broadcaster, the Code of Ethics and Broadcasting Standards, Principles of Self-Regulations, Fundamental Principles and Specific Guidelines Covering Reportage relating to Impartiality, Neutrality and Fairness as also the Specific Guidelines Covering Reportage- Guideline No 9 relating to Racial & Religious Harmony, must be adhered to.

Some of the statements that NBDSA took offence to were:

On YouTube, the video by NewsNation is now “private” and has been taken off air for common public…

…News Nation TV had in turn said that the channel or the anchor cannot be held responsible for statements made by the guests in the program, but, had tendered an unconditional apology if the statements had hurt anyone.

The NBDSA had ordered for the show to be deleted upholding the notion that any harsh reality being discussed in the media amounts to “Islamophobia”.

The complaint had been lodged by NGO Citizens for Justice and Peace (CJP) against the show anchored by Deepak Chaurasia. As per the complaint, the anchor made one Maulana Syed Ul Qadri ‘apologize’ on behalf of the entire Muslim community. The complaint further stated that an attempt was being made to promote ‘Islamophobia’.

It also said that the show tried to create hatred for the Muslim community by using clips to show that the Jamaat was promoting anti-national and anti-religious activities. CJP opined in its complaint that such shows shouldn’t be encouraged since they could ‘hurt’ the composite and diverse culture of Bharat thereby leading to violence.

As much as organizations such as CJP and mainstream media (MSM) would like to cover up and use the ‘Islamophobia’ red herring, the reality remains that Islamic conversion rackets as also grooming jihad are ground realities. There have been several such instances that have come to light in recent times.

As much as organizations such as CJP and mainstream media would want to deny it, the reality remains that both conversion rackets and grooming jihad are a reality with several instances of the same having been unearthed in recent times from across the country.

The UP ATS (Uttar Pradesh Anti-terrorism squad) had brought to light a pan-Bharat Islamic conversion racket. Earlier in June, the ATS had busted the illegal conversion racket with the arrest of Umar Gautam and his accomplice Mufti Kazi Jahangir Qasmi. Later, its Nagpur syndicate was unearthed with the arrest of Rameshwar Kawre a.k.a Adam, Qausar Alam, and Bhuriya Bando a.k.a Arslan Mustafa.

Similarly, Gujarat-based businessman Abdullah Fefdewallah also came under Uttar Pradesh ATS scanner in connection with the funding of the illegal religious conversion racket. The illegal conversion racket was active in 24 states and 16 people have been arrested so far, officials said.

Grooming is another menace and Hindu women have been duped by Islamists adopting Hindu names to trick the girls into marriage. Several instances of Hindu victims of grooming jhad being brutally murdered have also been reported.