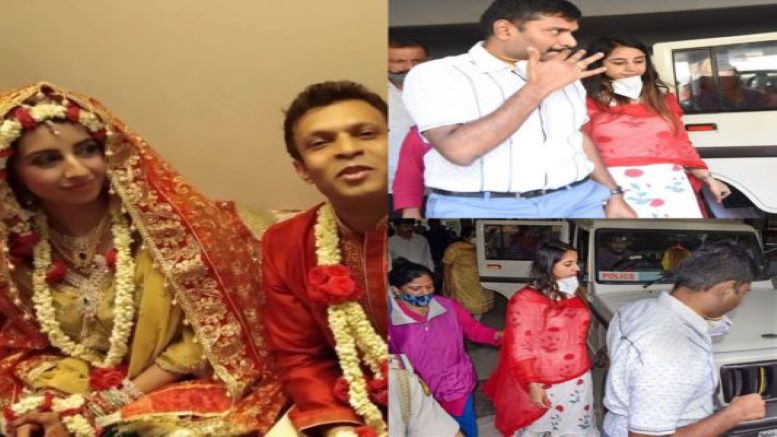 Morals and ethics seem to be the last thing we can expect from the film industry and the media. The drug scandal that has rocked both the Hindi (Bollywood) and Kannada (Sandalwood) film industries in recent times stands testimony to this fact.

Earlier this month, the Central Crime Branch (CCB) arrested Kannada actress Sanjjana alias Archana Galrani in relation to drug abuse in Kannada film industry. However, what escaped most people’s attention was the media manipulation which smartly hid her Muslim identity.

Her real name was Archana Manohar Galrani, before she converted. Just like that gold smuggler Swapna Suresh who converted to Islam. It is obvious that there is an element of craftiness in their intentions if they don't use their new names. pic.twitter.com/lOiU7R2Qj1

Despite the fact that Sanjjana, who was born as Archana Manohar Galrani, converted to Islam in 2018 to marry doctor Aziz Pasha and took the Muslim name Mahira, media houses continued to refer to her by her Hindu name.

It was vernacular channel Suvarna News which carried this information backing it with documentary proof including a conversion certificate issued by Bengaluru’s Darul Uloom Shah Valiullah mosque. The certificate issued by the mosque says that Archana has embraced Islam on 9th October 2018 and should henceforth be known only by her Muslim name “Mahira”. It also says that she adopted Islam as her new religion “of her own accord without any pressure”.

If that is the case, then shouldn’t media be using her Muslim name? Such duplicity is reminiscent of media using images of Hindu sadhus for crimes committed by Muslim fakirs, Sufi babas and Padres, or hiding identity of Muslim perpetrators in crimes against Hindus.

The case which began as a suicide (Sushant Singh Rajput) then turned to possible murder has finally brought the drug mafia in Bollywood out in the open. It is not just Bolly but every ‘wood’ seems to be afflicted with this malice. Besides the Hindi film industry, the Malayalam and Kannada industries have also been found to be involved in drug consumption.

It is a cause of concern because cinema has a great influence on the population in general and youth in particular who more often than not emulate their on-screen favorites. However, what we see in reality is those film actors who preach morality on-screen and on their social media accounts have absolutely no qualms in backing immoral practices and people to suit their agenda.

When Kangana spoke about Bollywood being a ‘gutter’, many film actors including Jaya Bachchan were offended. But with the industry turning out to be a hub of casting couch, drug abuse, and sleaze, it does seem like this isn’t an industry youngsters should idolize.

This industry is also all about scratching each other’s backs, and its hypocrisy has no boundaries. Many actresses, with the charge being led by Taapsee Pannu, jumped to the defense of director Anurag Kashyap when actress Payal Ghosh accused him of sexual assault.

In an amazing display of double-speak and hypocrisy, Pannu who was quick to side with Tanushree Dutta and declare Nana Patekar (subsequently given a clean chit) guilty even before a trial, was seen siding with Kashyap who she felt was being ‘lynched’ and wanted ‘karma’ to reach the door-step of everyone who was involved in this. What’s worse? When Pannu was shown the mirror, she had the audacity to claim that one should not equate the two issues. Interestingly, Kashyap has recently admitted to consuming hard drugs in past years.

It is par for Bollywood double-speak that a character like Anurag Kashyap, who feels entitled to routinely take potshots at the PM but plays victim when ordinary folk pay him back in his own coin, is now activating his defence league to browbeat a lesser known actress from his own industry who has levelled serious charges of sexual assault against him.

The world of glamour has been just window dressing the sleaze hidden within for a long time now. The bubble has burst and more skeletons are set to tumble out. A clean-up is certainly in order.