Methods of Misinformation/Propaganda — The NYT’s Attempts to Tar Hindus 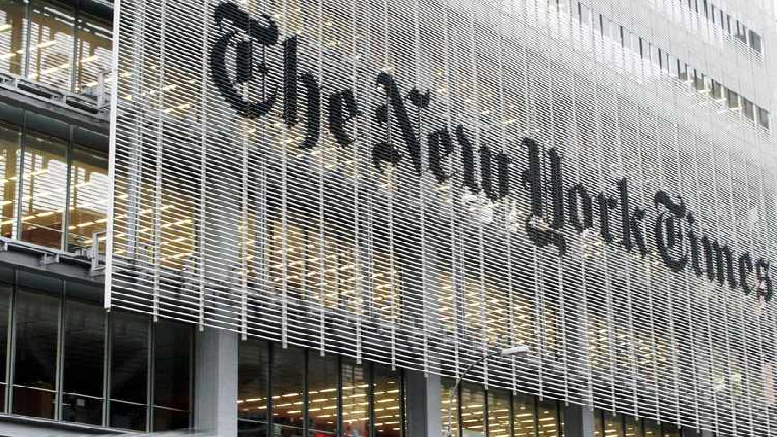 (Second in the series of articles on NYT’s coverage of Hindus, Hindu Dharma, Bharat)

It may be pointed out by those who read my first piece on this matter that the methods the Russians, the Iranians, or the North Koreans use to spread disinformation are vastly different from the reportorial methods used by any modern newspaper, radio or television channel: that the former is based on stealth and untraceability, with the intent to mislead and undermine, whereas the Western media’s intent is to inform, engage, debate, and challenge.

Defenders of The New York Times or Western media in general may also argue that we can differentiate the effects of the coverage by modern media versus the effects of disinformation by untraceable bots launched by the Russians, the Iranians, or the North Koreans. In this second in the series of articles on NYT’s coverage of Bharat, we will focus on some of the methods used by the NYT when covering Bharat/ Hindu/ Hindu Dharma.

We are asked to believe that as opposed to the openness of Western media that disseminates “information” what we have is the stealth of the Russians in their “disinformation” campaigns. We are led to believe that what the Western media disseminates is the “truth” — veridical with reality, and “rational, logical, scientific, realistic, and objective” as Ronald Inden (1990) characterized Orientalists’ belief in the quality of their knowledge as opposed to the knowledge that Indians had of themselves.

When it comes to the methods of gathering news and constructing opinion, we must be even more skeptical of the claims made by Western disseminators because of the “lies hiding under plain sight”. News gathering is a difficult and messy business, and what an individual reporter gathers on the ground is just a sliver of “reality” that she or he then weaves into a narrative.

The problem with news gathering multiplies when the event that is being reported on is a complex event with many actors who have different histories and goals that is staged in many locations and at different times — like during a riot or a sit-in or a demonstration — and that unless we do a careful amount of triangulating facts, opinions, and testimony what we end up with as slanted and mischievous as the disinformation spread by bots.

We also know that media does not have all the space and all the time to disseminate all the news which they deem “worthy” of reporting. So, we have “gate-keeping”. The gate-keeping happens at all levels of gathering news, constructing narratives, and publishing/airing them.

Then, the media can and do set agendas. McCombs and Shaw pointed out in 1972 that the “mass media have the ability to transfer the salience of items on their news agendas to the public agenda”. By the 1990s, the old adage that “the media aren’t very successful in telling us what to think, but they are stunningly successful in telling us what to think about” had been discarded and media scholars concluded that the media indeed influence the way we think by “framing” — through the selection, emphasis, exclusion, and elaboration of certain news and views — as I have pointed out elsewhere.

And it should not come as a surprise when McCombs in 1997 argued that the media “may not only tell us what to think about, they also may tell us how and what to think about it, and perhaps even what to do about it”. How do the message-manufacturers do this? It should be obvious to anyone but the simpleton that they do so by the choice of the subject/news to report, the language they use, the slant of the headline, the cropping of a picture, the length of the report, the selection of experts to support their narrative, and the placement of the news — in the front and up top or hidden in the back pages — and many other tricks of the trade.

So, while we can agree upon the fact that the Russians have a small battalion of people creating computer programs that mimic real people on social media who craft devious and malicious messages to lure and trap gullible Americans, we cannot seem to agree about the methods and intent of “mainstream media” and their trustworthiness. Divided as Americans are between Republicans/ Democrats and conservatives/ liberals we may agree that the news media are biased in their coverage of news and the opinions about the world’s affairs they publish: tilting right or tilting left, especially in their editorial and op-ed pages.

However, we may have fallen into the trap of believing that opinions are confined to those pages and that reporting, done on other pages, is “fair and balanced”. Only careful readers will pay attention to the choice of language, use of metaphors, the nature of the headline, and compare the coverage of one similar issue locally with another from elsewhere to understand that what seems to be “open, clear, and straightforward” reporting is about as obtuse and may be more dangerous than the computer-programmed bots infesting social media with “fake news” about Hillary Clinton and pizzas.

We can very quickly, easily dismiss the Russian bots generated mischief, but it is much more challenging to counter the narratives of the “mainstream media,” especially by an institution of the vintage and power of The New York Times.

Again, those considering this matter could point out that while Russia is a state actor, the NYT is a private institution and that its power and intent would not be the same as that of Russia. Indeed, Russian attempts at flooding American social media sites with a variety of devious/false ads/information was a state-directed attempt.

Beyond that we will have to weigh more carefully the actual power to influence and to effect change, and the intention behind their actions — by a state actor vs. a major, powerful, influential media institution into whose building even presidential candidates enter quaking in their shoes.

Of course, we can argue and quibble that misinformation, and deliberately misleading and mischievous or provocative news reports and opinion-peddling is not state-sponsored “disinformation,” but we will consider the effects of disinformation and media “misinformation” campaigns in the next article.

One of the methods of shutting out information and views is to make the op-ed pages unavailable for views differing from the ones that the newspaper espouses. So, if we take a look at the op-ed columnists published by NYT these past three years (from January 2017 to October 2019 — the period I have collected data from), we will find that all of them (with two exceptions) present only one set of views on Hindus, the Modi-led BJP government, and the actions taken by the government on Kashmir or other matters.

Here are the lists of op-eds published over the past three years. Each of those op-ed pieces can be dissected for the choice of facts, the choice of language, the lack of fairness and balance, and the demonization of one set of actors/ideas, but that will have to happen later and by others. I have commented briefly on a few, however): 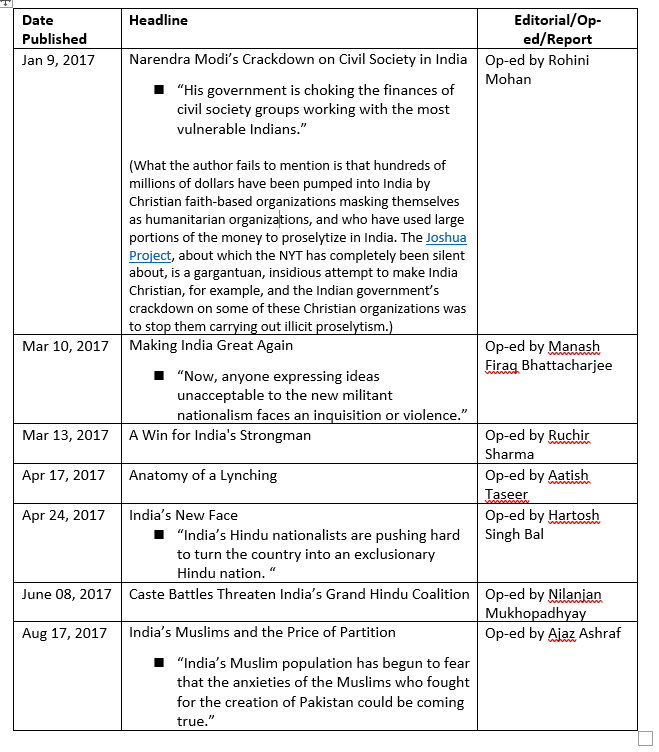 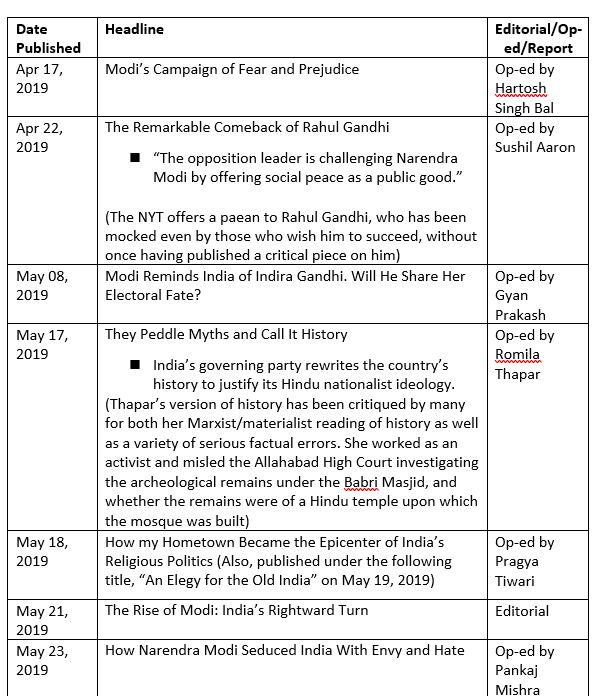 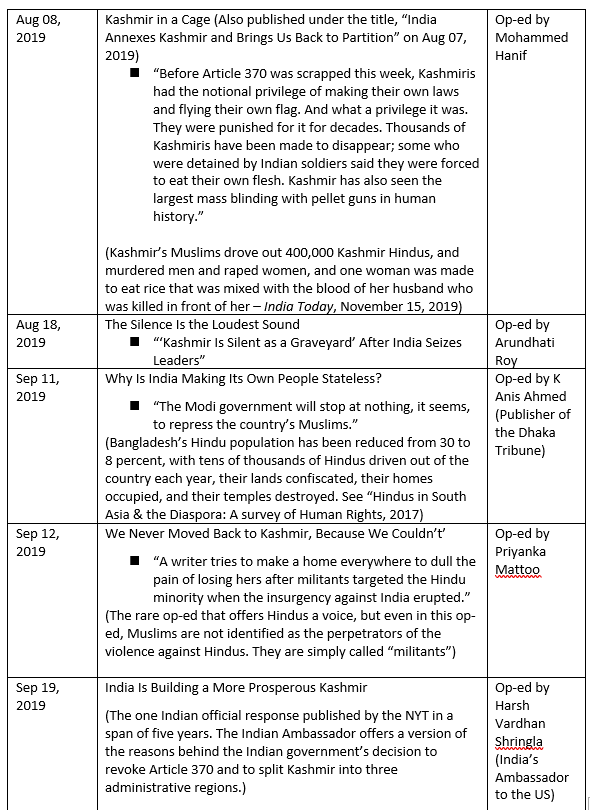 The choice of headlines by newspapers can keep a battalion of media scholars busy for decades writing papers and books on the nature, import, and impact of those headlines on readers. That the NYT, back in 1948, chose the headline that it did to report the assassination of Mahatma Gandhi is itself indicative of how easily, quickly, and how often the newspaper has highlighted Hindu culpability, when it has all along fought shy of naming and shaming, for example, Christian, Jewish, or Muslim perpetrators. 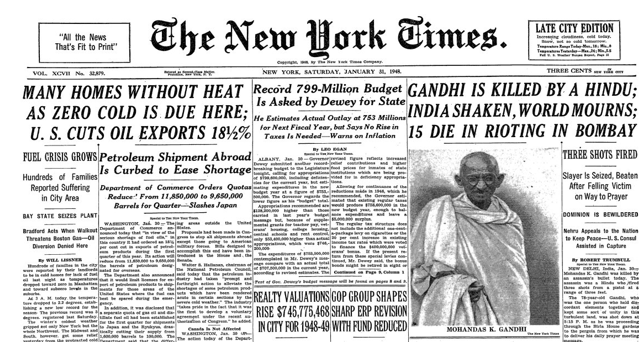 In wrapping up this article, I want to emphasize again that the reporting by The New York Times on Hindus, Hindu Dharma, Bharatiyas is not just a matter of bias, but has all the qualities of the narration by a “hegemonic agent” — those writers and institutions who dominate public discussions about others — “not simply in a constraining or coercive sense, but also in the sense that they have been accorded positions of leadership,” as Inden points out.

From this, we will take the next step, in the next article in this series to understand the intent and the effects of such coverage, and of such attempts to shame and tame Hindus and Hinduism.

(This article first appeared on medium.com on April 2, 2020 and has been presented above with edits)