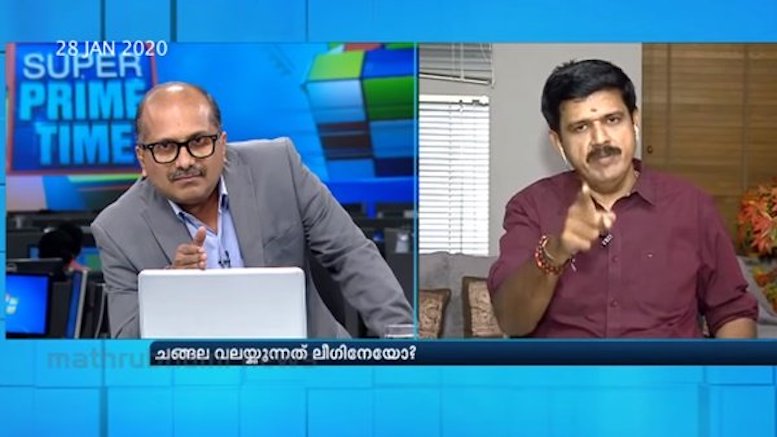 In Kerala there seems to be a common pattern with regard to prime time news debates on live TV. Local TV Channels invite spokespersons from various political parties and outfits for their debates. They start with spokespersons of their preferred choice and usually end with them too. Some channels are pro Congress and some pro Communist Party Marxist (CPM). This has been going on for quite some time now. Some dirty tricks are also used. Lowering the sound of particular debaters being a common tool of choice.

Bharatiya Janata Party (BJP) spokespersons are usually sidelined by using pretty inhumane tactics. They are allotted time as per the discretion of the anchor at a time of their choice. Then they are cut short while speaking or even when answering questions raised by the other speakers. This is done randomly by the anchor or by the Congress and the CPM speakers in the panel. This usually ends with a `Break` for commercial ads to appear. After the break the anchor usually goes back to the speaker of his or her choice which is invariably the Congress or the CPM speaker depending on the anchor. This despicable attitude has left many in the audience aghast.

The subject being discussed was even more complicated than what some might think. Kerala has a considerable percentage of population from the minority communities, mainly Muslims and Christians. They are vote banks for ‘secular’ political parties. On the 8th of January 2020, both the ruling Left Democratic Front (LDF) and the Congress-led United Democratic Front (UDF), which includes the Indian Union Muslim League (IUML), had called for a hartal in the state to oppose CAA-NRC and all political parties except the BJP, decided to come under one umbrella.

A few weeks later, to keep the pot boiling, the CPM-led LDF had organised a human chain to register their displeasure over the CAA and NRC. This was on Republic day . Some Muslim League workers and leaders decided to join the LDF led chain disregarding orders from the Muslim League leadership to desist from doing so.

The topic of the TV debate was this human chain and its fall out. A local MLA of the Muslim League and several of their local leaders were suspended as they didn’t obey party orders directing them to stay away from the human chain protest.

By then sheer frustration that comes from helplessness had built up inside Venu, the Mathrubhumi anchor. He knew that his paymasters had run out of options. He had no gimmicks left to show his loyalty. He started following all the usual tricks to drown out and browbeat the BJP panelist he himself had invited.

Venu first gave time to all the other panelists to speak uninterrupted. Eventually when Sandeep was given a chance to speak, Venu started interrupting him. Venu then tried to intimidate Sandeep by trying to warn him and wondering aloud if it would be more convenient for Sandeep Warrier to leave the debate. When that didn’t work, he decided to go for his usual `Break`. On return, Sandeep protested against Venu’s ill mannered rant,  gave him a piece of his mind (which he should have done many months back) and left the studio. After he left, Venu categorically said that he would not take back any words that he had said.

The very next day, a meek looking Venu came on live TV and apologised unconditionally to Sandeep. But the damage had already been done.

What is fascinating is the fact that Asianet News, Media One, Manorama News, Kairali TV and Mathrubhumi News all show bias especially towards anyone who wants to show the plight of Hindus in Kerala. This leads the viewer to suspect that Malayalam television channels are being run by anti-Hindu forces and not by economics in Kerala.

Sandeep was invited to a debate and he patiently waited for his turn to speak. Still, he was insulted by the anchor? Venu will not have any explanation for this simply because there is none. Viewers expect more maturity from seemingly senior journalists like Venu. In fact this episode is a lesson in journalism.