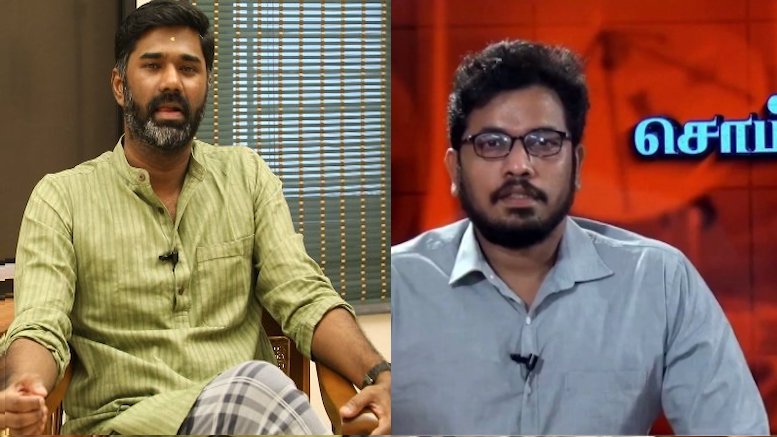 Journalists and social media influencers  Maridhas and Ravichandran have unravelled the nexus between certain Dravidian parties, Communists and media houses in the state to promote ideological hegemony and biased journalism that is Hinduphobic and divisive  in its grand narrative.

Unravelling the nexus, exposing complicity and calling out Hinduphobia. This could well  be popular You Tuber (more than 200,000 subscribers currently), vlogger and social media activist Maridhas’s self-written  job description! And this indefatigable activist  is bold enough to stir the hornet’s nests and encounter the lion in the den — in his relentless pursuit of  truth.

A few  days back, Maridhas took on  News 18 Tamil, the regional news channel of media conglomerate  News18. This time, however, he did  not stir up a hornet’s nest but  as he himself wryly describes it, “stirred up a den of venomous  snakes” with far reaching ramifications of his findings.

Deception is a tangled web. In a series of videos on his You Tube channel Maridhas Answers, Maridhas unravelled the web of deceit and conspiracy  between  two major Dravidian political ideologues and the media house. He  questioned the  nexus between the Dravidian  political parties in Tamil Nadu  such as the Dravida Kazhagam (DK) and the DMK (Dravida Munnetra Kazhagam) in converting News 18 Tamil into a propaganda channel for their narrow divisive ideology and  igniting and fanning the flames of Hinduphobia.

Maridhas’s expose and accusations  was deemed “insulting and offensive” by the DMK  who also alleged that he “insulted media persons.” Ironically, however, Maridhas admits that his original intention was to probe the activities and modus operandi of  a Dravidianist group in Tamil  Nadu, known as Karuppar Kootam (Black Group). This radical group, inspired by the ideology of EV Ramaswamy, popularly known as  Periyar, has named itself in a so-called  subversive act of reclaiming their pride and identity in being  dark skinned (“black”)—an obvious jibe at the now discredited Aryan (fair)-Dravidian (black) dichotomy and the irreconcilable differences between the two.

“If they are against religious beliefs, I dare them to talk similarly about other religions. By mocking openly at Hindu religious beliefs, they make us look like naïve fools who will take anything! I respect all religious faiths and traditions, but that doesn’t mean that I should keep quiet when my faith is being mocked at. True secularism and communal harmony can  flourish only in a climate of mutual respect,” says Maridhas in one of his videos.

“ They [Karuppar Kootam] feed the public ridiculous lies and gross misinterpretations of Hindu scriptures based on an Abrahamic  perspective. None of them know Sanskrit and  have not studied the  original texts. Often, a Marxist smokescreen is used to destroy and denigrate Hindu culture and demoralise followers. The last straw was when the group  insulted  Sri Murugan  and  the sacred chant Skanda Sashti kavacham, a deity beloved to the people of Tamil Nadu. Who feeds them such anti-Hindu propaganda? People need to remember that  while a person’s freedom of expression is a constitutional right of every citizen of this  country, it  cannot interfere and affect the dignity of another person,” says Satya, member, IMK.

The IMK succeeded in having the Twitter handle of Karuppar Kootam suspended  because of their  violative and intrusive behaviour.

Rajiv Malhotra and Aravind Neelakandan in their brilliant book Breaking India speak about the role of evangelical organisations in creating a  toxic eco system that deliberately weakens and gradually breaks Hindu dharma traditions through internalisation and indoctrination  by followers who are often linked to a particular political ideology that  supports such subversion.

“Foreign scholarship has been used to manipulate Indian identities for almost two centuries  and recent international interventions  strengthen separate groups. Hinduism is an embodied spirituality that valorises the body—both male and female, and even animal—whereas the Abrahamic tradition, precisely because of its obsession with sin and fears of idolatry, has stifled the possibility of such bodily representations a as a divine medium.”

Maridhas’s efforts to trace the ideological underpinnings of the Karuppar Kootam  was revelatory. It revealed how  allegiance to a political ideology  enables the media to insidiously  control and manipulate the  narrative like a master puppeteer, especially targeting Hindu dharma.

“When we traced them backwards, we found several intermediaries such as  Centre for Media Persons and Change (CMPC which  indoctrinate new recruits of News18  Tamil with Communist-Dravidian ideology and is headed by a Muslim employee of the news channel), One Mind Generation Research (run by prominent family members of the DMK  and which supplies content  writers  for CMPC), several News 18 employees involved with the CMPC who directly support  Karuppar Kootam and the  head of  News 18 Tamil who openly espouses a Communist-Dravidian ideology and only recruits those who show ideological alignment,” says Maridhas.

Angered  and shocked by his discovery of  the nefarious connections, Maridhas  has launched a Save Journalism from DMK campaign on social media. According to him, courageous, fair and free journalism is being endangered. This kind of behind the scenes political control and nexus  compromises with  the quality of content and balance in reporting as post 2016, 70 percent of recruits in Tamil news channels such as News 18 Tamil,  Channel 7 and Puthiya Tamzhiagam  are those who demonstrate  ideological compatibility.

If Maridhas has managed to unravel the conspiracy on the sheer strength of his committed investigation, Madan Ravichandran of Channel Vision, corroborates every fact finding by Maridhas from his perspective of being an employee who  worked in some of  the media  houses in the state.

“I am a  former IT employee who  decided to switch careers and become a journalist because I was passionate about it. When I applied to several TV channels, I often made  it to the interview round. However, I discovered that I was rejected because my answers to seemingly innocuous questions like ‘Who is your favourite leader?” were not politically correct,” recalls Ravichandran.

However, once he  discovered the art of sounding politically correct, he cleared the interview round.

“The operating model of these media  houses is driven by a dominant political ideology in the state. If you are perceived as not toeing the line, you are treated subtly and not so subtly as an outsider, systematically  isolated and cut off  from work opportunities or career advancement,” says Ravichandran.

In  his latest vlog on this issue, Maridhas remarks that he shared with readers a communique from the Head of News 18 that they would seriously look into the issues he  has raised.

“This immediately stirred  chaos and commotion that seems to  be greater than COVID-19. My only purpose in bringing these issues into the public domain is that the people in this country have a right to know the truth. I am being accused of fudging the letter. But I have enough evidence to prove  its authenticity. Knowing the enormous clout, muscle and money  power of the powers that be, why would I fabricate  or fake news? We need to counter hegemony; create awareness among people about how Hindu customs and  traditions are being attacked. I speak as the voice of the moral rights of Hindus.  And in doing so, I’ve never hurt the religious sentiments of other faiths,”  says Maridhas.