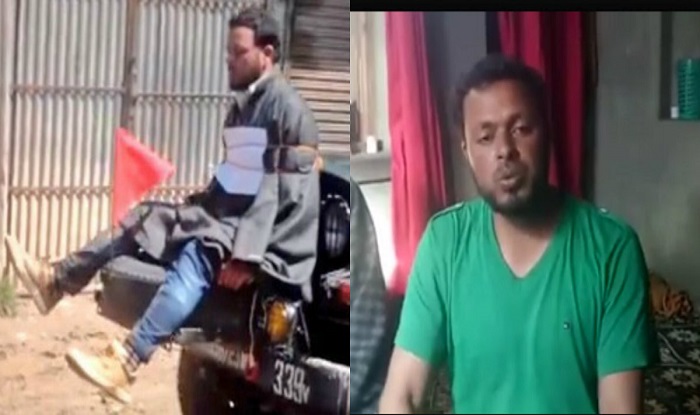 After a video showing CRPF jawans on polling duty being abused, kicked and slapped by ‘protesters’ in Kashmir went viral and invited condemnation from across Bharat, worried secular-liberals have quickly manufactured a counter to deflect attention. A video, shared by former Jammu and Kashmir Chief Minister, Omar Abdullah on twitter on Friday, shows a Kashmiri man tied to the front of a moving army jeep, to prevent stone pelting on the Army convoy.

Although the Indian Army ordered an inquiry soon after, full fledged attempts are being made to advertise the video as standard modus operandi of the Army. Broken facts are being reported and the scenario is being projected as, the brutality of the Indian Army and the Murder of Democracy.

Main stream news reporters are running after the alleged stone pelter who was tied to the jeep, Farooq Ahmad Dar, for a media bite, but no one took time to elicit the views of the CRPF jawans who were abused and physically attacked a few days earlier, or tried to present the entire picture and the circumstances under which the Army major had to take such a step.

What is a young major of the Indian Army, in-charge of a particular location, supposed to do when a large mob is after the life of the election officials, ITBP jawans, policemen and Indian army personnel? He had two options to save the life of his colleagues: either open fire on the mob which would have resulted in a bloodbath or to come out with some innovative technique to forestall the loss of lives on both sides.

Security sources say this video was filmed when polling officers faced a mob of stone-throwers. 9 ITBP and J&K state policemen who were guarding the polling booth were badly outnumbered in front of a blood-thirsty mob and hence they sent an SoS to the Army.

“They would have been lynched by 400 people,” the sources said. An Army Quick Reaction Team was called in to help the group. As the crowd reportedly swelled ominously in size, a group of 15 army men led by a young officer appeared to be hopelessly outnumbered, the sources say.

“They were sure to be lynched there since the crowd size increased and opening fire would have resulted in a blood bath. To defend themselves, the Company Commander caught hold of a protestor and tied him to his jeep,” sources said.

Army officials say it was a “do or die” situation during an attack by local residents in Budgam. Army sources said a five-vehicle convoy led by Major Gogoi was carrying 12 poll officials when they came under heavy stone-pelting by locals, including women, who showered the cars with stones from rooftops in Budgam area on the outskirts of Srinagar.

“The stone attack sent things spinning out of control…it was do or die,” said an Army official. “The major who volunteered to serve in Kashmir took the call, deciding not to open fire and unleash bloodbath.” The army and polling officers reportedly then left the area safely without any more stone throwing and the protester was handed over to the police.

The Major of the Indian Army who was in-charge of the situation has started getting support from many corners. General GD Bakshi (retd.) said that the army officer responsible saved lives on both sides.

“They are screaming for the scalp of that young Major Gogoi who tied a stone pelter on his jeep. I think in retrospect that the boy did some out-of-the-box thinking and saved lives on both sides. The standard military solution would have been to shoot the pelters dead. He was authorised to but for some reason our boys seem hesitant to shoot- what with this constant Human rights tamasha. An operation is judged by its end results. He was able to rescue the ITBP boys who were surrounded by a blood thirsty mob.

He seized the stone pelter used him as hostage to get safe passage for his column. The Israelis do it routinely. Why can’t we do it? This way no military or civilian personnel was killed. You can always apprehend a stone pelter for interrogation about his links and take him to your post.”

Can forces control spiraling violence in Kashmir with hands tied behind backs?

Eight people died and nearly 100 were injured in unprecedented violence during the recently held Srinagar by-polls held in the shadow of threats and a boycott call by separatists. Electronic Voting Machines or EVMs were damaged and burnt and the voters’ turnout was the worst in 30 years.

In recent years, 1000s of security personnel have been wounded in murderous attacks by ‘stone pelters’ – these are radicalized youth, usually funded by Pakistan, who are organized via social media (WhatsApp groups etc.) to quickly assemble in areas where counter-terror operations are going on, and attack security forces to help terrorists escape.

As per one report, the government has decided to stand by the Army officer who took the decision to use an alleged stone-pelter as a “human shield” tied to a jeep to steer his unit and Jammu and Kashmir officials and paramilitary personnel on election duty to safety.

The government has taken note of an Army probe into the April 9 incident which concluded that the commanding officer took the decision reluctantly and as the last resort after he realised that his unit had to pass through streets crowded with a mob of stone-pelters who had also taken positions on surrounding rooftops. The trapped personnel included about a dozen local J&K employees, about 9-10 ITBP jawans, a couple of constables from J&K police and a bus driver.

The government has appreciated that the controversial decision was taken in an extraordinary situation where the officer incharge of the unit had a difficult choice to make.

Indicating that the government feels the Army is being made a political target, minister of state for PMO and Udhampur MP Jitendra Singh told a J&K newspaper that “apologetic” Kashmir leaders were guilty of encouraging terrorism in the Valley. He said these leaders had lost the moral authority to make insinuations against Army personnel who they found a soft target while they lacked the the courage to condemn perpetrators of terrorism.

But today, there was shocking news that J&K police has filed an FIR against the Indian Army unit commanded by Major Leetul Gogoi. The Union Government must ensure that local political compulsions should not be allowed to target an upright, quick-thinking officer like Major Gogoi.

Omar Abdullah, who was no where to be found when CRPF jawans were hit, abused and publicly heckled in Srinagar, has at once demanded an enquiry into the matter. Kashmiri politicians like Omar Abdullah, Farooq Abdullah and Mustafa Kemal have made their position quite clear with inflammatory and pro-Pakistan comments in recent days. The fact that such individuals are still welcomed by the Lutyens’ cabal, shows the sorry state of our media and intellectual establishment today.

Like General Bakshi, other senior retired Army officers also came out in support of the young Major who averted major loss of life with his presence of mind –

#ArmyVideoDebate.Officer acted with presence of mind to avoid bloodshed be appreciated.Normal approach no results.This can b Game Changer.

In fact he deserves full marks for his innovative and imaginative approach.

But Lt. Gen. HS Panag (retd) had a different take and tweeted the below:

Image of a 'stone pelter' tied in front of a jeep as a 'human shield',will 4 ever haunt the Indian Army&the nation!

T.V. Mohandas Pai, the Chairman of Manipal Global Education and former member of the board of directors of Infosys, replied to Gen. Panag’s tweet:

Why?The slight of stone throwers beating uniformed men will forever haunt India.Would you like army men to have been lynched by terrorists https://t.co/H6TYRExfQb

A far-left troll, Aditya Menon, who is editor for a left-liberal portal called CatchNews (run by Rajasthan Patrika group) and who has been previously caught spreading false propaganda to stoke tensions in Kashmir, jumped in to counter Mohandas Pai with an ugly tweet. Unfortunately, Gen. Panag too weighed in with an uncalled for comments by labeling Mohandas Pai as a ‘petty born-again right winger’ – Another retired Army man jumped in with an objectionable tweet directed at Gen. Panag, but this too was met with a shocking, elitist response from Gen. Panag: Incidentally, Gen. Panag is a member of political party AAP and his daughter Gul Panag contested the 2014 Lok Sabha polls on an AAP ticket.

The Communist Party, which has an old habit of opposing almost everything that evokes patriotism, jumped into the debate in favour of the alleged stone pelter. In a statement released by the Polit Bureau of the CPI(M), the party put forth a defence of the Kashmiri man, going by media reports to say that he was never a stone pelter and did work related to Kashmiri shawls. In other words, CPM believes the Army is lying and that stone pelting is just an excused cooked up by Army to terrorize innocent Kashmiris.

We wonder where these so called stalwarts of morality vanish, when matters regarding the integrity of Bharat such as the attack on CRPF jawans and Pakistan’s death sentence against Kulbhushan Jadhav, come to the fore. At an hour when the armed forces of Bharat are putting their heart and soul to uphold the integrity of the nation, what is expected of us is to support them at every step. If a certain section of ‘intellectuals’ and anti-nationals can not help them in their cause, the least they can do is stop preaching morality and remain quiet.

As for Kashmir, it is abundantly clear that the call of Islamism has thoroughly radicalized Kashmiri youth. Pakistan will continue feeding this Islamist narrative, while treacherously calling for talks to resolve the issue. Jammu and Ladakh cannot be made to suffer at the expense of the valley anymore. Trifurcation of the state is the way ahead – at this stage, Kashmir doesn’t deserve democracy.