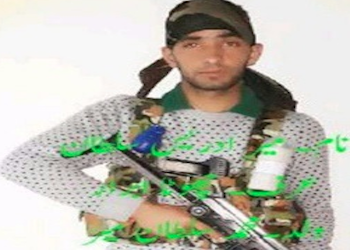 “In a first such case that has come to light, an Armyman, who had been missing since last week, has joined terror outfit Hizbul Mujahedeen in South Kashmir’s Shopian district, police said here on Monday.

The Armyman, identified by cops as Sepoy Idrees Mir, who was posted with the 12 Jammu and Kashmir Light Infantry in Bihar, joined Hizbul along with two others on Sunday, police said. Mir had arrived in his village Safnagar in Shopian on April 12 and had been missing since Saturday night, police added. On Monday morning, his father, Mohammed Sultan Mir, filed a missing complaint with the police. Mir was a BSc second year student when he joined the Army.

A photograph of Mir with an AK-47 went viral on social media on Sunday. Mir was to be posted to Jharkhand and was unhappy about the move, a PTI report said. Army officials said they were confirming the authenticity of the photograph and others details.”

Apart from downplaying an incident which should actually serve as a serious wake-up call as it demonstrates the level of Islamist brainwashing in the Kashmir valley (especially South Kashmir), the TOI reporter Saleem Pandit is also factually incorrect in saying that this is the ‘first such case’.

A Muslim army man, joins a terrorist organization in India, something that’s becoming more common than you think.

And read how it is reported in TOI
-ANGERED BY TRANSFER, armyman joins Hizb.

What angered you today that will make you terrorist? For me, it was traffic. pic.twitter.com/s1QJ9zmCQd

Such incidents will only repeat themselves till our national security establishment understands the nature of the threat we are facing – they could do worse than following the simple measures outlined in this prescient 2017 article ‘Choking the Kashmiri Trojan’ by @SignOfFive.