How Kangana Ranaut and Chetan Bhagat exposed the Bollywood Mafia Bollywood actress Kangana Ranaut in a recent interview with Republic World’s Arnab Goswami opened a can of worms on the deepest darkest secrets of the industry. Claiming actor Sushant Singh Rajput’s suicide was abetted by a ‘Bollywood Mafia’ in her tell-all interview, she questioned why the Mumbai Police was not calling in and interrogating the ‘real powerful people’.

She highlighted a ‘showdown’ between Rajput and Aditya Chopra, revealing how Chopra’s talent agency had barred Sushant from working in Sanjay Leela Bhansali’s film Ram-Leela, who had chased Sushant for five years, and instead promoted Ranveer Singh who was finally roped in for the movie.

Kangana also accused the Chopras of getting Shekhar Kapoor’s movie starring Sushant canned, and when Sushant wanted to free himself from their talent agency to work individually, they swore to see to it that he finds no job in the industry.

She also questioned Karan Johar’s decision to not give Drive, his film starring Sushant, a theatre release, and went on to call the bluff on B-town’s business racket that decides on who receives awards in various Awards events.

Apart from Aditya Chopra and Karan Johar, Kangana also took Mahesh Bhatt to task. Pooja Bhatt’s tweets suggest the Bhatt camp demands absolute loyalty and gratitude from Kangana for the initial two movies, Woh Lamhe and Gangster, they had cast her in. 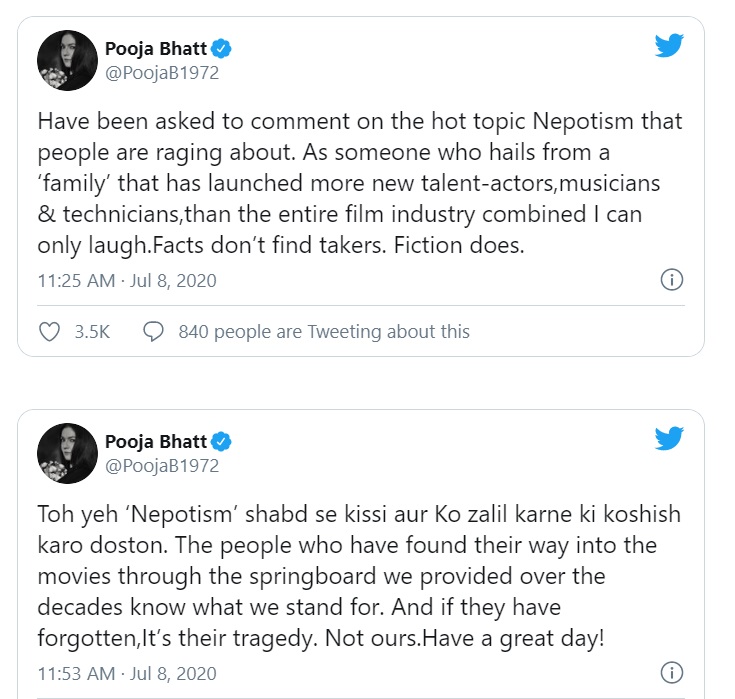 But Kangana stated that Mahesh Bhatt offered her a terrorist-sympathizing movie, but was livid and charged at her when she turned down the offer. She also expressed her suspicion regarding Mahesh Bhatt’s role in Sushant Singh Rajput’s death and chatter about his mental health.

For an industry that prides itself for its ‘liberal’ values and anti-establishment bravado, the Bollywood crowd came down heavily on the actress for her candid revelations and cut quite the sorry figure.

Swara Bhaskar and Taapsee Pannu were the first ones to take jibes at the three-times National Awards winner, with Pannu atleast keeping it somewhat classy.

However, it must be noted that Taapsee Pannu, who had slammed Kangana Ranaut for blaming nepotism for her lack of work a couple of years ago, finally admitted to having lost movies due to the unfair practice. Kangana did find some support from other celebrities – she has definitely touched a raw nerve of the film industry with her campaign against nepotism.

Popular writer Chetan Bhagat weighed in with a string of tweets, reiterating almost everything Kangana had put forward in her interview about the elitist club aka Bollywood Mafia. Hinting on how Bharatiyas still drool over English-speaking cliques, the Three Mistakes of My Life author warned movie-watchers against getting fooled by movie critics from this club with regards to Sushant’s upcoming release Dil Bechara.

Though he named none of the leading film critics, one such critic, Anupama Chopra, got rattled, which led to a fresh verbal spat. Chopra is married to film director Vidhu Vinod Chopra.

Each time you think the discourse can’t get lower, it does! https://t.co/yhkBUd8VSQ

Bhagat also tweeted claiming how he was wronged by the makers of 3 Idiots when he was a powerless newcomer, stressing that he was robbed of much-deserved credit. For the uninitiated, we’d like to inform, Anupama Chopra is producer-director Vidhu Vinod Chopra’s wife. The author revealed that he considered committing suicide after being mistreated and discredited by Vidhu Vinod Chopra, the producer of 3 Idiots.

Many know this, for those new here.
1) 3 Idiots was based on my novel Five Point Someone and my story.
2) The film won every story award that year.
3) I was not given any of those story awards. They took them all.
4) As a powerless newcomer I was bullied and was deeply affected

We must add here that another prominent film journalist & critic Rajeev Masand, who works for CNN-IBN, was questioned by Mumbai Police in connection with Sushant Singh Rajput’s death. He allegedly  wrote defamatory blind articles maligning Sushant personally and professionally, and gave poor reviews to his movies at behest of others. Masand has been accused of nepotism and writing favorable articles for people coming from known Bollywood families, and defamatory articles against particular celebrities.

The next author to have accused Bollywood of creative and intellectual robbery is Harinder Sikka, whose novel, Calling Sehmat, was adapted by Meghna Gulzar (daughter of lyricist & poet Gulzar and former actress Raakhee) into the Alia Bhatt starer, Raazi.

The author claims that not only did Meghna Gulzar get him excluded from the Jaipur Literature Film Festival, but she also had his book launch delayed and had him removed from an awards function. He adds that she tweaked the ending of the story to make it sympathetic towards Pakistan.

“I am not the only one. What did Meghna do further? Chhapaak….She took away that poor writer – the lawyer in Delhi, her credit away. Ask Raveena Tandon’s father…there is a history of mafia operating. This occurs over here because I was an outsider.” Sikka said on a televised interview on Republic World.

The debate has now intensified with relatively more eloquent celebs like Ranvir Shorey joining in.

Sushant Singh Rajput’s unnatural demise has left the country pained, and fans are determined to have justice served this time. However, even in a sensitive time as such, the social climbers in Bollywood failed to grow out of pettiness. Revelations of close links of Bollywood biggies with dubious Pakistani expatriates have also come forth. The current churning, one hopes, is the beginning of the end of this rotten Bollywood culture.