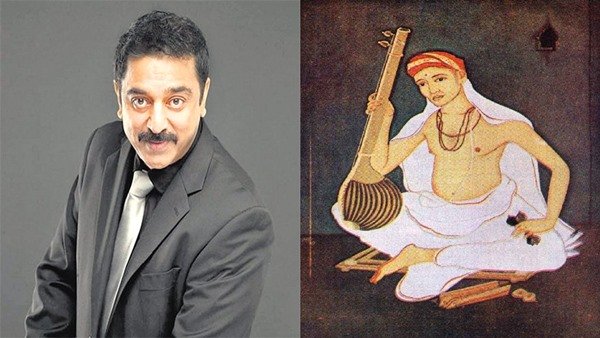 The recent  blasphemous remark on Sri Thyagaraja Swami by actor and politician Kamal Haasan is part of the Breaking Bharat grand narrative rooted in the regional socio-political-cultural ecosystem.

I grew up in the early 1970s in the Chennai  that was then Madras.  I still remember an elderly Brahmin who often visited our street. He clanged his cymbals rhythmically in his hands  and sang  bhajans rapturously. His  bhakti (devotion) and bhavyam (humility) was unselfconscious. My grandmother urged my mother and me to offer him rice and prostrate before him to seek his blessings.

That was my first experience of unchavrithi – a sacred  act in which a bhagavata (a bard or devotee of the Divine) accepts offering of rice grain from people. Unchavrithi is  a code of conduct for a grahasta bhagavatha (householder devotee)  prescribed in the dharma shastras. No, we never perceived it as “begging.” On the contrary, it was a privilege; an honour to give unasked.

Given this backdrop, the recent remark by actor and politician Kamal Haasan  on Sri Thyagaraja Swami  (1767-1847), reeks of arrogance, ignorance and   presumptuousness.  For those even with an elementary knowledge of Carnatic music,  like me,  Sri Thyagaraja needs no introduction. The iconic,  prolific, and divinely inspired  composer and musician is unanimously acknowledged as one of the trimurtis or  trinity  of musical pioneers in the Carnatic music tradition.

Whipping up controversies, sensationalizing and stirring a hornet’s nest  is nothing new for  Kamal Haasan and others of his ilk in the public  space in Tamil Nadu.  This  also closely follows another widely publicised remark  by one of his colleagues on  the Brhadeeswara temple and the Andal  controversy led by Tamil lyricist and poet Vairamuthu last year.

However, when one connects the dots, the pixilation morphs into a well-defined image – lack of serious scholarship  grounded  in Bharatiya knowledge systems and traditions,  rootlessness,  criticizing and attacking cherished beliefs and whitewashing Hindu dharma traditions, rituals and practices; all this etched on a canvas of Left Liberalism that revels in denigrating or demonising one particular faith and community. This is part of  the Breaking Bharat  grand narrative rooted in the regional socio-political-cultural ecosystem.

The trigger for Haasan’s absurd observation was a live interaction with  actor Vijay Sethupathy on Instagram on May 4, 2020. There could not have been a more disparate context in which the remark was made. The two actors were discussing, among other things,  the relative merits and demerits of art and commercial cinema.

Haasan, who straddles both worlds, used the analogy of Sri Thyagaraja Swami “begging” on the streets of Thanjavur. The analogy  highlighted his stance of  choosing to launch his own film production and distribution  company and thereby avoid grovelling  before the portals of  art cinema.

As reported in Swarajya, when asked by Sethupathi on chalking his own style in the Indian film industry, the veteran actor, who dabbles more in politics these days, said that he wouldn’t have launched Raaj Kamal company had he not acted in the out and out commercial Tamil film “Sakalakala Vallavan” (roughly translated as Master of all arts) in 1982.

“People criticised me for acting in that movie after having acted in Moondram Pirai (remade as Sadma in Hindi). Even I was angry with myself. But had I not touched that route; I would not have launched Raaj Kamal. We are in a trade (profession) in which we sell tickets. This is not singing seeking charity, the way how Thyaga Iyer (Saint Tyagaraja) sang about (Lord) Rama and begged on the streets of Thanjavur. I don’t have any interest in such an art like that.

My desire is that tickets should sell, I want to become like MGR (late matinee idol and founder of the AIADMK – All-India Anna Dravida Munnetra Kazhagam – M G Ramachandran), Sivaji (Ganesan). Then, why should I be adamant that I won’t make people happy? If they (people) don’t understand my art, I have to bring them to that level. Instead of that I can be living in a forest as a saint or live there itself bathing in slush or not having bath…”

Carnatic musicians,  and rasikas or connoisseurs of Carnatic music revere Sri Thyagaraja as “Thyaga Brahmam;” an amsa or spark of Brahma himself.  The  actor’s denigration and out of context reference to the life of the composer and a reductionist view of Hindu practices sparked off a furore among the Carnatic musical community.

United for a cause

In an unprecedented show of solidarity, several Carnatic musicians led by  Palghat Ramprasad, grandson of the late  iconic mridangam vidwan Palghat T S Mani Iyer, launched an online petition seeking an  unconditional apology from Kamal Haasan, who is also the founder of a political outfit Makkal Needhi mandram (MNM),  for his blasphemous  reference to Sri Thyagaraja “begging in praise of Lord Rama’.”

“The specific reference to Thyagarajar and Lord Rama, also suggests the negatively pointed target on a specific religion/caste, which is indeed an insult to the followers of this faith: because we all know that in the past and present, there have been several saints and scholars from various religions who have earned a livelihood – cannot stoop to lows of mentioning that as ‘begging’ – in praise of Gods of the religions they belong to. Also, the Unchavrithi he did was owing to his Bhakti, and not agendas outside of that.

While no one can tarnish the image of a holy soul such as Thyagaraja, least of all by people who conveniently and selectively oppose certain faith-based ideologies, the remark on him is extremely hurtful to an entire section of the society, which perhaps, you may care least about. However, we artists from the Carnatic music fraternity strongly object to the pointed reference of a holy saint whom we all revere, and demand an apology for your malignant and despicable remarks against him carried out intentionally or otherwise.”

“Absolutely well said and I fully and completely stand by every word written in this petition! Unchavrithi is a form of worship in itself bringing together the Lord’s devotees in a very unique way.  And those who welcomed Thyagaraja Swami (during his Unchavrithi) ,who has done more than a crore Rama namas knew that they were welcoming one of the one of the greatest devotees . Such derogatory comments should be condemned.”

Since the last count, the online petition has garnered more than 27,000 petitioners and the numbers continue to swell.

“Nidhi sala sukhama ramudu sannidhi seva sukhama…” (Oh! My mind! Tell me, truthfully, whether wealth is comforting or  is the  holy presence of Sri Rama more comforting?)  sang Sri Thyagaraja  who spurned the offer by  the  Maharaja of Thanjavur Serfoji  II Bhonsle to be part of his court.

Unchavrithi is not  “art” as Kamal Haasan alleged. It is a  sadhana  (spiritual practice) that involves dissolution of the ahamkara (ego). Sri Thyagaraja  infused his kala (art)  with  sadhana . Unfortunately, for  many people like Kamal Haasan, their  art is denuded of sadhana. And art without sadhana  lacks essence.

To carry spiritual profundity and musical genius is  a rare  boon. Sri Thyagaraja embodied it in body and soul.  However, to  be swayed by  the intoxication of arrogance, ignorance and rootlessness  is an asuric  manifestation and a curse.

Voices of Hinduphobia manifest this in both letter and spirit. Its time, however, to reclaim the narrative of Sanatana dharma  from adharmic forces masquerading as the voice of reason, iconoclasm and so-called progressive and liberal thought.