While the liberal intelligentsia never tires of narrating how ‘fascist’ Prime Minister Narendra Modi is, liberal journalists who peddle the ‘Modi is a fascist’ narrative easily get away with using profanities against the PM and police alike.

Most journalists working in mainstream media have been desperate to prove their editorial stand that the Delhi riot was a ‘Muslim pogrom’. And this group bias has become a self-fulfilling narrative as they quote each other’s reports and ignore the numerous eyewitness testimonies and ground reports showing how Islamists plotted and triggered these riots.

Let’s see what Aveek Sen, a freelance journalist specialising in cyber-security and geopolitics who has written for newspapers and media outlets like The Tribune, The Pioneer, DailyO, FirstPost, India Times, Rediff.com etc., had to say about the Delhi riots, CAA and NRC, and how all this will eventually play out  – 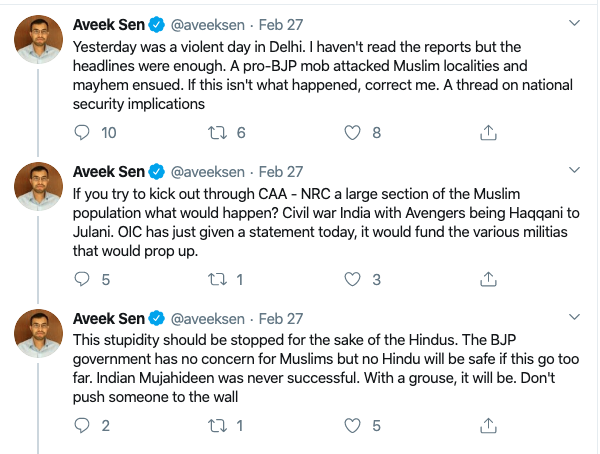 We will address each of the points raised by Aveek Sen; his ‘analysis’ is listed in bold below, followed by our observations –

That a man who claims to be a geopolitics analyst is willing to pass judgement on a sensitive subject like a riot just going by a few headlines tells us a lot about the state of Indian journalism. The journalism fraternity in Bharat suffers from a debilitating cognitive bias. The entire news industry is structured in a way – from academia i.e. mass communication & other courses, to senior editors and owners who are wedded to the Nehruvian consensus – that it promotes a herd mentality in which certain liberal tropes dominate. For this class, a riot must by its very definition be something that ‘majority’ radicals aligned with RSS-BJP carry out against a perpetually persecuted ‘minority’. All evidence to the contrary must be ignored, or if too disturbing to be completely censored it must be balanced as ‘retaliation by a desperate victim’.

The 2020 Delhi riots were the first ones in an era of social media saturation where smartphones are ubiquitous. Maturing of the alternative digital media paradigm, accompanied with rising Hindu awareness, has ensured that non-traditional journalists hit the ground to garner first-hand accounts from Hindu victims who were traditionally ignored by MSM. So the stark reality of the Delhi riots is now out in the open, as is the propaganda peddled by mainstream media including Western outlets like Wall Street Journal, BBC, NYT etc. Left-liberal censorship of inconvenient truths now has rapidly diminishing returns.

The real stupidity here is of the editors who deemed this man fit to write on geopolitics and about Bharat’s neighbourhood, if this ‘analysis’ (‘rant’ seems more apt) is anything to judge him by.

Just how exactly such geniuses arrive at the conclusion that CAA-NRC will be used to strip a large section of Indian Muslims of their citizenship is beyond realm of logic. What ‘security analysts’ like Aveek Sen are asking the Bharatiya State to do is to ignore our massive illegal immigration problem. It is conservatively estimated that there are 1.5-2 crore illegal Bangladeshi refugees (Hindus) & immigrants (Muslims) in Bharat. NRC is aimed at building a national citizen register similar to what several other modern nations have. Signalling intent to punish illegal immigrants by holding them in detention centres before eventual deportation, and creating a legal mechanism to deprive them of citizenship benefits they might have acquired through fake documentation, is a must to stem the steady influx across our Eastern borders.

But taking this basic step for national self-preservation is deemed provocation enough for Indian Muslims to drag the country into a civil war. The threat of the Muslim world actively aiding the break-up of Bharat is brandished to scare the Govt. into meek submission. Hindus have suffered the most from jihadi terror than anyone else in the world, even when we blindly adhered to the ‘secularism’ that Aveek Sen and his ilk so dearly cherish. Kashmiri Pandits were driven out when secularism was at its peak, i.e. even before Babri Masjid was demolished.

As for the threat of global jihad against the kafirs, we have been the target of Saudi, Qatari and Iranian funded extremist Islamist preachers for decades now. Our cities were targeted with impunity by foreign and local jihadis during ‘secular’ UPA rule. It is only in the last 6 years under Modi that our cities have been free of the terror threat and innumerable jihadis cells have been busted.

So thanks, but no thanks, all aware citizens – Muslims included – now prefer to walk down the path of unabashed national interest, rather than sacrificing ourselves for some utopian ‘liberal experiment’.

So, what is Aveek Sen’s ‘solution’ to avoid the doomsday scenario painted by him? So much for left-liberal proclamations that they are the guardians of the Constitutional Republic! Their faith in democracy and its institutions have been thoroughly exposed in just 6 years of Modi rule. So whether it is eminent public intellectuals like Pratap Bhanu Mehta and Harsh Mander inciting people to ignore Parliament and Supreme Court and hit the streets to get CAA-NRC overturned, or a hack like Aveek Sen – the sense of entitlement is hard to miss. “We will prefer to see the country burn, if YOU the people do not do exactly as we say” – is the message from Lutyens’ Delhi (aka Congress ecosystem) and its ideological cousins across the country.

Even today, the overwhelming majority of mainstream media – newspapers like Times of India, Hindustan Times, Indian Express, Telegraph, The Hindu; TV news channels like TV Today, Aaj Tak, NDTV, CNN-News 18; digital media outlets like The Wire, The Print, Scroll etc; news agencies like PTI; magazines like Outlook, India Today, Caravan, The Week – is stridently anti-Hindu, anti-Modi. Yet, a few outlets like Zee News, Republic, India TV, Times Now (partial) and alternative media outlets like Swarajya and OpIndia breaking free of the Lutyens’ herd and covering the Hindu perspective as well, has so enraged the left-liberal club that they have branded all of media as ‘Modia.’

Supreme Court judges who refuse to toe the Lutyens’ line are heckled in court, lashed in articles, threatened with impeachment. Ex-CJI Ranjan Gogoi has exposed how the left-liberal lobby gangs up against judges who maintain an independent stance.

The call for ‘stalling’ is a thinly veiled threat that left-liberal intelligentsia will blindly oppose each and every action of the Modi Government, even if it is something as bipartisan as infrastructure development or manufacturing indigenization, if their diktats on immigration & other policies are not followed.

Would the military dictatorships of Egypt, Iraq, Turkey allow Hindus to practise their faith freely with equal rights as Muslims? Left-liberals will ignore such simple questions because for them Hindu Dharma is anyway not worthy of respect – Hindu hatred is as deep-rooted in the left-liberal club as it is in Islamic Army of Pakistan or Islamist terror organisations. Likes of Aveek Sen advocating a scorched earth policy should also remember that it was military-ruled Myanmar that cracked down on Rohingya jihadis, while ‘democratic, secular’ Bharat resettled the Rohingyas in a sensitive region like Jammu.

It is easy to dismiss Aveek Sen’s ramblings as irrelevant. But that would be a mistake. He is only articulating, albeit slightly more crudely, the received wisdom of the highest echelons of the Lutyens’ establishment. This incestuous club which still controls important levers of the Indian state, will go to any lengths to defeat the popular will which is gradually finding expression through the Government of Narendra Modi.