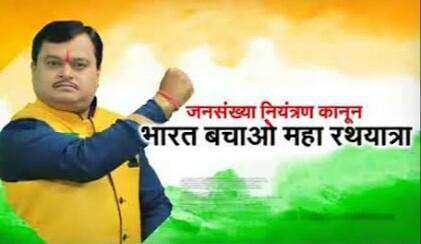 In an era when most media houses in the country operate within the boundaries defined by the nation’s Nehruvian elite, and stay clear of any topics considered taboo by the secularists, one news TV channel in the country has openly challenged these norms.

Sudarshan News is a Hindi news channel based in Noida, Uttar Pradesh, which was launched on January 26, 2007. Shri Suresh Chavhanke is the chairman, managing director and also Editor in Chief of Sudarshan News. From its inception, Sudarshan News has boldly spoken up on pressing issues impacting national integrity.

Recently, Chavhanke ji undertook a ‘Bharat Bachao Yatra‘ (Save Bharat March) over 70 days, covering 20,000 km to spread awareness on the urgent need for population control and to urge the Government to introduce a 2-child policy to restrict Bharatiya citizens from having no more than two children. The usual left-liberal lawyer/activist cabal tried their usual tricks to stop the march, but the Surpeme Court rejected their petition.

In this interview, Mayank Jain ji spoke with Shri Suresh Chavhanke on his experiences during the march and the response it elicitied-

Some key highlights of the interview –