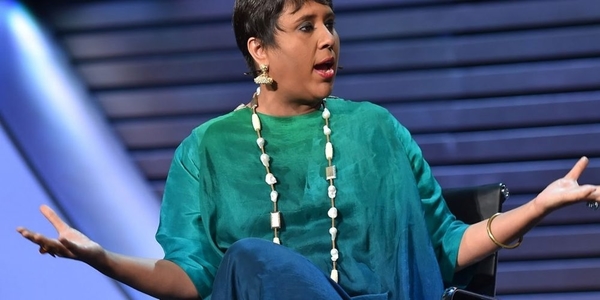 In context of recent claims by journalist Barkha Dutt that she had been receiving threats from the ‘powerful people in the establishment today’, here is an interesting conversation that took place between her and aware twitterati.

Received chilling veiled threats and "messages" from powerful people in the Establishment today that my family and I are under surveillance – and that I will be smeared & maligned to stop me from starting any new projects. Was advised to get my house debugged. Is this my country?

Over the last few months those associated with the ruling party have warned me – politely, impolitely – not to work on new TV projects and told me – "we will never allow them to happen"- today I was told a 45 minute meeting held on how to stop me, smear me, malign me, tap me.

Now someone tell me how many are these ‘few months’?  And why is Barkha Dutt talking about this now?  Moreover, faced with such threats, there is an obvious course of action that she could have taken. Tavleen Singh tweeted the obvious – which Dutt pretends not to be obvious, given her response:

Name them Barkha. Why are you protecting them? If prominent BJP leaders are behaving like goons they must be exposed. https://t.co/5nEBPtxSCY

Many Internet Hindus speculated what the real reason was for not following Tavleen Singh’s advice. Three of them are reproduced here:

And you are worried about tarnishing prominent BJP leaders? 😃

Fear of defamation case , when the threat turns out to be false…. Hence the names are not coming

But for Dutt, the obvious is the last thing that she will WANT to do, because that not only means serious work, but also does not allow her to play the role of a victim.  However, there are some on the internet, not just Internet Hindus, who do not seem to fall for her game.

For those asking why not file an FIR; please know that intimidation works in multiple ways – arm twisting media owners; tapping phones; income tax harassment, social media smears, regulatory stranglehold… Ask again – why has only Republic been able to launch as a news channel?

Find this hard to believe. There are many in the government who are your friends (in a positive sense) and hold you in greater respect than many of your contemporaries. Besides, you have hardly been critical about the Govt. So, I'd suspect this is malicious misinformation.

proof of the pudding is in eating. Let us see if they let the channel happen.

Whoever it is how is that relevant? Or one has to be BJP friendly to work in India ?

The second part I agree (ie you shouldn't have to be BJP friendly to work/open a media outlet) but ownership can be material info in media ownership (as we know in the case of some channels, papers and portals). However, I think this is just a Kejriwal kind of conspiracy theory.

Many Internet Hindus came to the obvious conclusion, as stated in the following:

What if there is some compliance problem at Barkha's end , and she wants clearance by putting the Govt on defensive ?? Talking of possibilities, anything is possible. We all know people are motivated by a lot many things. Money and ideology being just 2 of them.

One of the first tweets by Dutt on the subject was:

Those who conveyed the message to me today- said a big meeting was held on how to stop me and my projects. I was told tools will include- tapping my phone, income tax cases, smear, surveillance. was advised debugging and personal security and to not proceed with my new work. https://t.co/P0ZUeYKiva

Now, this would give an impression that today, EVERY journalist in Bharat is completely, unabashedly, uncritically, supporting the government of Narendra Modi. Perhaps Rajdeep Sardesai, Shekhar Gupta, Sagarika Ghose, Pranoy Roy, Siddharth Vardarajan, etc., should answer questions about their journalistic professionalism. (I know that there are cases against NDTV, but they were started before the present government has come to power.)

As far as the power of the present government to manipulate news is concerned, lets look at this perspective also:

Congress media cell has ensured my complete boycott on almost all TV channels- Guest coordinators are called up & told "if u call Poonawalla – we will ensure no Cong leader comes to your channel" – I have proof of this!

Could you support my right to free speech too sir! https://t.co/mz8qazCeWc

Dutt is going all over the place, because even some (like Tavleen Singh) who are not considered to be Internet Hindus, are not buying her victim-hood story.  So, perhaps her real game plan is what Shefali Vaidya speculates.

Now the plot is clear. All that posturing, the thick laying on of the drama and the victim act is just passive bullying and blackmail for ‘give me the license or…….’ @BDUTT has a better career as a screenwriter for Saas-Bahu soaps! https://t.co/Tqot6OkyVR

It is now time that Dutt and others in the mainstream media realize that they no longer control the narrative in Bharat. While they had a field day before, internet has ensured that they are no longer able to censor the flow of news and opinion to the public.