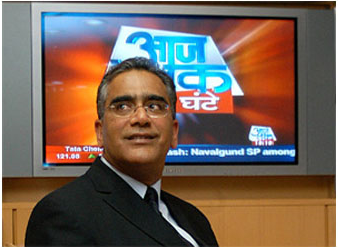 Competition usually brings out the best in most fields of human endeavor, but in Bharat’s mainstream media it brings out the worst. The heartburn experienced by rival channels after PM Modi’s interview to Times Now’s Editor-in-Chief Arnab Goswami was apparent to all media observers, but India Today group’s Hindi channel AajTak crossed all limits of public decency by posting a crude, tasteless tweet from their official twitter handle, exposing their anti-Modi and anti-BJP bias.

The now deleted AajTak tweet called the Arnab interview as one done by a ‘Chamcha’ (sycophant) and contrasted it with a Karan Thapar interview of Modi from 2007 when nasty, hostile questioning by the controversial Thapar caused Modi to walk out. When caught out by twitter user @manichejain, AajTak quickly deleted the tweet and offered a weak apology that ‘one of their employees intended to post the tweet in question from their personal handle’.

However, their lame defense was quickly exposed by alert twitterati –

.@aajtak ‘Human-behind-the-machine’, any idea why such inadvertent tweets are never made for Con-men & Lefties? @manichejain

If @aajtak is serious, then it should sack the person tweeting this and disclose it. His career should be overhttps://t.co/zdYo3M5Oo3

Till the time of posting this article, AajTak had not divulged the details of the employee who shares such derogatory and sub-standard views through his/her ‘personal handle’. Expecting AajTak and similar media outlets like NDTV, Indian Express etc. to take action against such employees is like asking for the moon – when it is the chief editors and top managements of these media houses that promote such political hatred and bias. So while our journalists berate and demonize as ‘troll’ the ordinary citizen who uses social media to counter their biased mainstream narrative, they themselves probably have dozens of anonymous handles through which they take potshots at their ideological opponents! So much for media objectivity and integrity!

The IndiaToday group, and in particular their Hindi channel AajTak, have time and again demonstrated that their ‘journalism’ should be taken with a pinch of salt, as their reports often display overt or covert bias against the Hindutva movement, BJP and PM Modi in particular. See the below tweet where the IndiaToday official handle was found supporting someone taking a cheap potshot at the BJP spokesperson Sambit Patra.

There is a pattern behind this “human error”. #ShameAajTakpic.twitter.com/gkOPUncnXp

And the most egregious examples of bias from IndiaToday group can be seen in these 2 incidents – one involving Headlines Today national affairs editor Javed M Ansari, where even India Today group Chariman Aroon Purie played a supporting role; and the other involving AajTak’s Executive Editor and prime-time anchor Punya Prasun Bajpai:

1.) In the IndiaToday conclave 2013, then Gujarat CM Narendra Modi was invited to speak on the topic ““Namo Mantra for India” (Modi’s development vision for India). After the talk, most of the questions during the Q&A session were asked by IndiaToday employees! This itself shows how the event was “fixed” by Rahul Kanwal (star anchor for Headlines Today) and his boss Aroon Purie. One of the ‘questioners’ was Javed M. Ansari who asked “why Modi avoided talking about the 2002 riots and whether Modi regretted those riots which took place under his watch”? This to a man who had spoken multiple times during and after the riots, and had been subjected to the most intense scrutiny by a SC monitored SIT for his handling of the riots, and had come through every investigation unscathed!

Ansari’s intent was clear – facts and a clean chit from the highest court of the land were not enough…he wanted Modi to accept culpability and apologize for the 2002 riots. Instead of ticking off his employee for asking such a deliberately misleading question, Purie joined in and tried to pressurize Modi into saying what the India Today group wanted to hear. Maintaining his composure, Modi explained that he had answered this query many times before, including in front of the Supreme Court appointed SIT, and he had seen the “games” of the media many times over and is not bothered about the hidden agendas of the media insiders asking these questions.

2.) In March 2014, during the peak of the election campaign for the Lok Sabha 2014 elections, an unedited portion of an interview with Arvind Kejriwal by Aak Tak’s Punya Prausn Bajpai was leaked on YouTube. In the clip, Arvind Kejriwal is seen requesting Bajpai not to ask him about the corporate sector and turn “all the middle class support against us”. Bajpai advises Kejirwal on what to say to attract the largest ‘votebank’ in the nation. The Aam Aadmi Party leader is also seen telling Bajpai to play up a part that will portray him as a revolutionary, possibly a reference to Bhagat Singh whose photograph is shown behind Kejriwal. “Bahut krantikari, bahut hi krantikari (Very revolutionary. Indeed very revolutionary),” Bajpai says smilingly while agreeing with Kejriwal’s suggestion to highlight Bhagat Singh in the background.

This was a clear example of what media critics refer to as “collusive” interviews. Neither the media group nor Kejriwal has ever questioned the authenticity of the clip.

It is a sad reflection of the times we live in that a discredited channel like AajTak is dominant in the private Hindi News TV category. And the tragedy is worse when even so-called media watchdog digital outlets like NewsLaundry (run by Madhu Trehan, sister of Aroon Purie and ex-founder of India Today) join in the Arnab bashing, rather than call out the biases of channels like Aaj Tak.

Why trashtalk Doordarshan because Arnab got your goat 🙂 https://t.co/O31i0bs1Qq

In the end, these 2 tweets say it best…most of the grumbling in the media over the Arnab interview with PM Modi is just a case of sour grapes.

I imagined an interview was all about getting the subject to speak his/her mind. Now it seems it is all about the interviewer hitting hard.

Lutyen’s circuit babalog journalists who never achieved an interview with a sitting PM in their career are cribbing about #PMSpeaksToArnab.

We recommend reading this piece by the incisive MediaCrooks to understand other dimensions of how this Arnab interview has exposed all Modi-haters, including his political rivals in Congress and AAP.