In a classic show of dishonest journalism, the India Today group headed by Aroon Purie changed the religion of those involved in a superstitious act from Tamil Nadu. The original news story is about late constable Annai Indira from Dindigul in Tamil Nadu whose children were forced by a pastor to live with her decomposed body with the fake promise of resurrecting her like Jesus Christ.

Can some big RW MSM take this up? As @IndiaToday changed the flavor of the story totally (& hid the Pentecostal facts), Aaj Tak too did the same. I read a Mid-Day (English) story of the same, based on the IT story. This is totally wrong & unethical. https://t.co/aXkkVzDP4V

The original article in Tamil clearly mentions how a pastor named Sudarshan forced the family of Annai Indira, a Hindu woman who had converted to Christianity two years ago, to keep the decomposed body and pray for Jesus-like resurrection of the woman.

For the India Today group, pastor Sudarshan conveniently turns into a priest and Jesus becomes an ambiguous God which makes it easier for them to twist the narrative. They also hide the fact that her full name is Annai Indira which would give away her Christian identity. They make no mention of the fact that it was her conversion to Christianity that led to a difference of opinion between her and her Hindu husband Palraj.

As per India Today if any issue pertains to Abrahamic crime, then the news must be made as Hindu as possible. 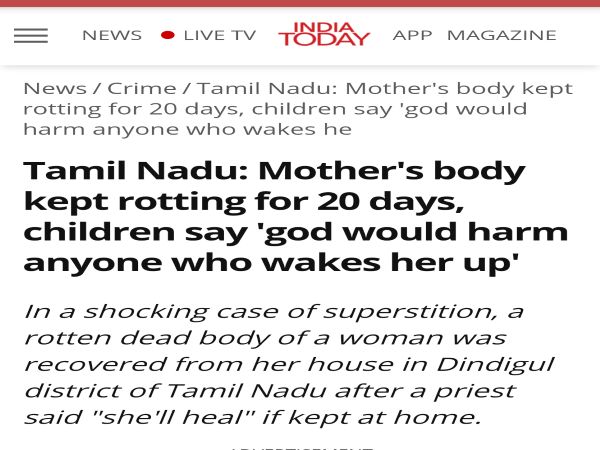 India Today group’s Hindi edition Aaj Tak went a step further and changed jabam (Tamil word indicating Christian prayers in the Tamil article) into a pooja and like its English counterpart makes no mention of either Jesus Christ or the Christian pastor or Indira having embraced Christianity. For Aaj Tak as well Christian pastor Sudarshan is the same as a Hindu pujari. 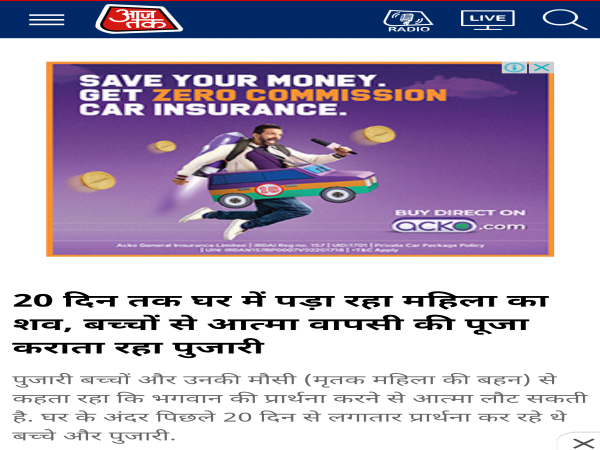 Make no mistake the Tamil article mentions Kartar (Tamil word for Jesus) and not Bhagwan or the generic word God used by the India Today group. This is how Hindudveshi media builds an anti-Hindu narrative. Likewise, they always depict any criminal who is a Muslims pir/ fakir/ baba as a Hindu pandit/sadhu. If the culprit is a Muslim or Christian then the Hindudveshi media will conveniently not mention the name. And if they can twist the narrative to make an Abrahamic into a Hindu as in the above case, then they will slyly do so.

The India Today group which was named in the TRP Scam FIR is a known Hindudveshi media house. This is not the first time that the group has resorted to manufacturing an anti-Hindu narrative. Earlier, India Today was irked at the fact that the Kashi-Mahakaal Express had a berth reserved for Bhagwan Shiva.

They then mocked Yoga:

The newsweekly India Today has put an inappropriate image of Baba Ramdev doing a yoga asana on its cover page. The magazine chose an unusual photo of Baba Ramdev for its cover story titled ” “Power Yogi – How Baba Ramdev discovered commerce and turned spirituality on its head to emerge as a political, economic, and cultural superbrand.”

But the India Today group’s love for Christianity is understandable since for them the Christian Cross was holy but the Hindu Trishul wasn’t. No wonder with such a deep-seated hatred for Hindu Dharma, they have completely turned a pastor into a pujari and a Christian prayer into a puja, in addition to conveniently hiding the religion of the deceased and her family just because they wanted to equate superstitions as solely a Hindu phenomenon.

This is not just dishonest journalism but intentional misrepresentation of facts with the intent to hurt the sentiments of Hindus. It is a travesty that in Bharat, media houses like the India Today group are not made to pay for their Hindudveshi reporting and wilful targeting of the majority community just because Hindus are apathetic.

While this is true of most media houses in Bharat, the India Today group has crossed the lines too many times and continues to be brazenly anti-Hindu because it knows it can get away with it.