In the Name of Justice: Hindu American Youth, Social Media, and The Woke Thought Police (WARNING: This article contains screenshots with strong language. It may be unsuitable for younger readers and triggering for others.)

What is Wokeness, anyway?

Originating in early twentieth century black music, “staying woke” meant being aware of the injustices faced by the black community. Erykah Badu used “woke” in her 2008 song “Master Teacher”, reinvigorating its use in the black community. After the 2014 shooting of Michael Brown in Ferguson, it was then adopted by the Black Lives Matter movement. Soon after, wokeness was appropriated by mainstream American society, which chronically appropriates from black culture.

This new pop culture version connoted a broader critical consciousness, allegedly around a more comprehensive map of injustice. Wokeness was then commandeered by a small in-group who reduced it to a power game of identity mapping and Wokespeak. (If you don’t understand what that means, that’s kind of the point.)

Wokeness devolved into something akin to playing cards with a group of three-year-olds who keep changing the rules without telling you and throwing temper tantrums every time you get it wrong. The bigger the tantrum, the bigger the Wokeness. When the “You’re cancelled!” bell is triumphantly rung, you’re officially evil. (Note that “being cancelled” was also appropriated from black culture.)

Cultural appropriation always distorts the source meaning. Critical consciousness is not a competition. It is a dialogue that rejects authoritarian thought regimes while embracing dissent. It isn’t a copy-paste model of “liberation”. Where is the possibility for dialogue when so many groups (of people and thought) are denied entry into the increasingly smaller inner sanctum of Wokeness? Especially when they decide who is Evil Empire and who is Resistance?

And, why, when it comes to Hindus and Hindu Dharma, has the Wokeclique already rung our death knell?

(Note: My references to Wokeness will connote the appropriated pop culture version.)

The Woke-Trolling of Hindu American Adults

It’s helpful to illustrate the intense, righteousness Wokehatred spewed at Hindu American adults in order to fully digest what our youth face. I am a researcher and prone to collecting and analyzing data, so I’ll use an example from my experience.

Facebook recently launched an “Avatar app”. Over the past few decades, avatar has been used in the gaming world as a kind of creative self-expression. The Facebook app was just that. But avatār is Hindu concept, referencing the descent or manifestation of a deity in earthly form. I suspected most Facebook users hadn’t a clue. Plus, there weren’t any Hindu identity markers available on the app. 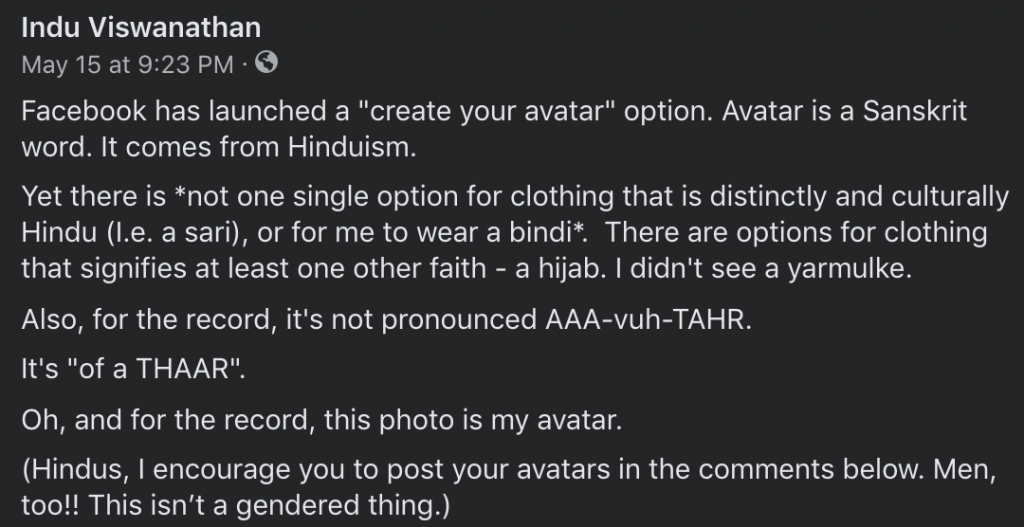 My inner educator and Hindu whispered teachable moment. So I made a Facebook post. It’s been incredibly heartening to see that the vast majority of responses have been incredibly supportive and grateful. Many people shared that they didn’t realize avatar was a Hindu concepts. (And some people whinged about “cultural loaning” and the “evolution of language”.)

And then came the Wokelash. 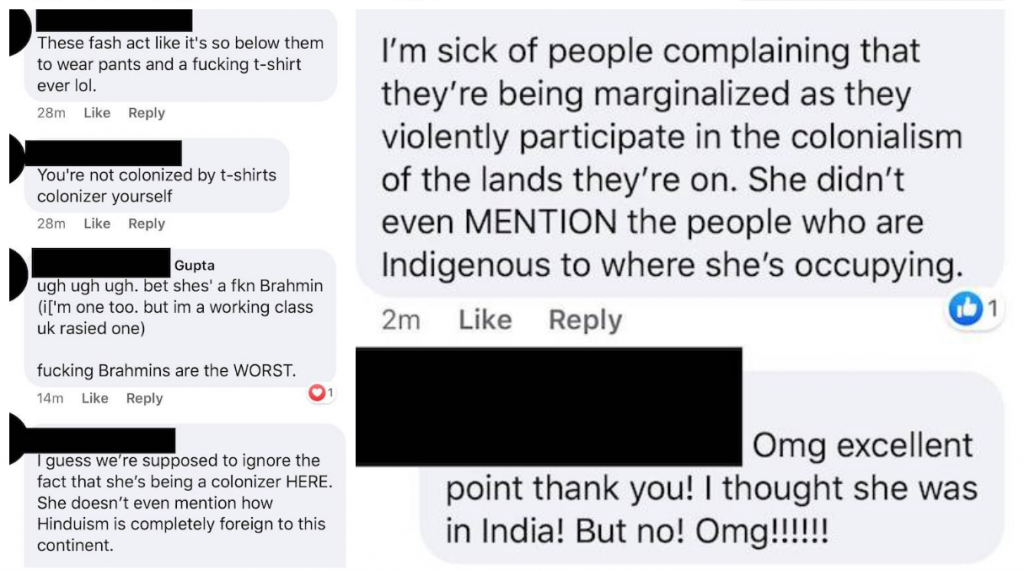 Let’s break this down.

1. The poster calls me out as “dog whistling Hindutva”, linking my post about Audrey Truschke as “proof”. The fact that I disagreed with Truschke’s white-washing of Aurangzeb (a Mughal tyrant who murdered nearly half a million Hindus), her persistence in equating Hindu Dharma with Nazism, and the refusal of Rutgers to engage sufficient dissenting scholarly voices was “proof” that I am an Islamophobic Hindu fascist.

2. I never stated that only Hindus wear saris and bindis, which was their big “gotcha”. But…the sari originated in the Indic civilization prior to the arrival of Muslims and Christians; descriptions can be found in Hindu shastras and literature going back thousands of years. And while bindis have become a fashion accessory for all, they have symbolic meaning for Hindus. Meanings for which we get mocked, sneered, and sometime attacked. (Remember the Dotbusters?) (You can read my fuller analysis of the trolling here. And another analysis here.)

3. Even more disturbing, someone using the name “Aurangzeb”, the Hindu-murdering tyrant, is joining in the fun as a “legitimate Woke critic”.

4. Note that the last commenter is not of Bharatiya descent and seems to have no idea or care that Aurangzeb murdered and colonized Hindus. They’re so busy righteously condemning me that they don’t realize the irony of their accusation.

Putting on my researcher hat is helpful because we need the data, but it’s also a coping mechanism. The amount of vitriol spewed at my direction and my body in the name of social justice simply because I asked for Hindus to be visibly represented and I wished to educate people about the source tradition of avatar…well, it knocked the wind out of me.

The Woke-Trolling of Hindu American Youth

I recently learned that Hindu American youth are being bombarded on Instagram with misguided articles perpetuating violently anti-Hindu Woke narratives. For instance, this article about Mindy Kaling’s new show, Never Have I Ever, slaps every anti-Hindu Dharma Woketrope on the table. It’s so extreme that it would be funny, were it not for the impact it has on our youth. When they respond with thoughtful, nuanced, and informed opinions, they get Woke-trolled. I asked a friend if any of the kids they knew had taken screenshots of the trolling. They responded that, for the most part, the kids go silent, until one of them finds the pain unbearable and speaks to an adult.

Of course. Of course it is too much for a young person to be scorched by this much Woke vitriol— steeped in lies, half-truths, and gaslighting — and stop to collect evidence. Even if they could, they don’t necessarily have the resources or support to process what is being spewed at them. A young friend spoke out about Hinduphobia in a college Facebook group in response to a series of campus events about Kashmir. These events consistently silenced Kashmiri Pandit voices, the indigenous Hindu inhabitants of the region who were violently driven out by Kashmiri Muslims and now live as unrecognized religious refugees. The events excluded a Ladakhi student, despite the fact that Article 370 impacted Ladakh. In a passive aggressive response to his advocacy, this image was left on the Facebook page. Because of his efforts to educate his peers and add more perspectives to the ongoing campus discussion about Kashmir, he was ostracized from the South Asian community.

See that red dot on the top left of that image? That’s the symbol for Stand With Kashmir, a campaign that is affiliated with Equality Labs. Remember them?

Equality Labs is also behind Students Against Hindutva, a national organization that is sweeping campuses across the country. SAH’s predecessor was Holi Against Hindutva, an anti-Hindu Dharma smear campaign shrouded in Wokespeak that spreads blatant lies about the Hindu festival of Holi.

This typifies the hypocritical accusations spewed at Hindu Americans — the majority of American Wokefolk don’t know anything about our scriptures, our history of persecution, or contemporary Bharat. They nod knowingly when a Woke South Asian tells them that it is “Islamophobic” to mention Hindu persecution and many Wokefolk choose to only listen to those people. Those people are “educated” by one set of organizations that commands the entire Woke narrative about Hindu Dharma, which is premised upon cherry-picked histories, fear-mongering, and outright dishonesty.

Irony of ironies, the woke South Asian will say something along the lines of “Thank you for holding a safe space for me to share the truth. Hindu fascism doesn’t allow counter narratives or dissent”, even as they tell you to only believe them and viciously attack any Hindu American who calmly provides counter evidence and analyses to their fictions. This is happening to our youth.

We have to do something. The adults have to do something. Hindu American youth are navigating the concerted efforts of a highly organized, well-oiled anti-Hindu Dharma movement that is operating under the banner of justice. This group claims to represent the interests of minority groups in South Asia, but never speaks out against Hindu persecution in South Asian countries where we are the minority. They inundate our youth with the message that to be a good person they must renounce Hindu Dharma.

Even if you believe that the mainstream media narratives about Bharatiya politics are true, surely you must recognize that it is not fair or right that Hindu American youth need to answer to this.

So what can we do?

If you are a young Hindu American and you are experiencing any of this kind of hate, please tell a trusted adult. You don’t have to deal with this alone.

If you are a Hindu American parent, talk proactively to your kids. Let them know you can handle the truth and that you want to help them process it. Focus on listening and honor their privacy. If they are reluctant to open up to you (which they may be), find them a safe and compassionate adult to talk to instead.

If you are a parent who is not Hindu American, talk to your children about this phenomenon. And reach out to your friends who are Hindu American parents to see how you can support.

If you are a fellow educator, please talk about this in your classroom, with your colleagues, and parents. And if you are interested in working with me in developing anti-bullying materials specifically for the Hindu American community, please reach out.

And no matter who you are, if you are interested in a deeper and fuller understanding of the contemporary struggles and landscape of Hindus and Hindu Dharma, I urge you to look outside your usual mainstream media sources.

(This article was first published on the medium.com on May 24, 2020 and is being reproduced here, after minor edits to conform to HinduPost style-guide)