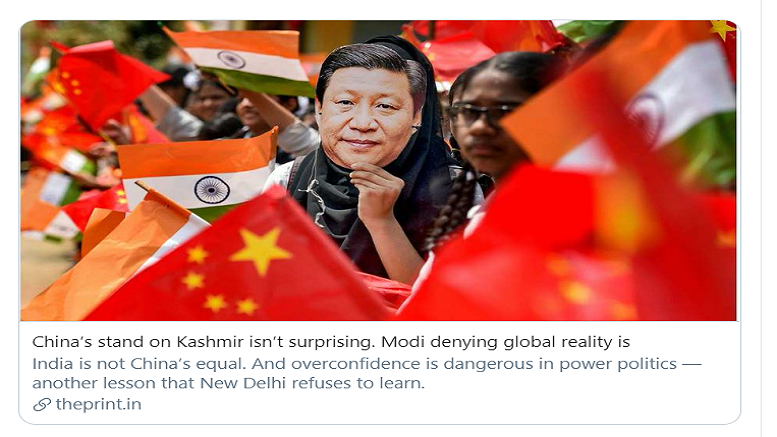 Bharat’s establishment intelligentsia has failed to show original thinking, bar a few, for a long time now. The abject paucity of imagination and inability to think with a non-Western lens of our editorial class is well known. But the same malaise afflicts several self-appointed intellectuals too.

Many academics, retired bureaucrats, diplomats & policy wonks appear wedded to particular themes or ideologies and keep recycling old wine in new bottles. Some are outright shills for foreign agendas inimical to Bharat. Others execute bewildering intellectual flip-flops using sophistry to suit whatever narrative catches their fancy, confident no one will notice but forgetting that the internet never forgets.

A twitter thread by Mihir Shah (@elmihiro), reproduced below, analyses threadbare one such article by a foreign policy ‘expert’ Prof. Rajesh Rajagopalan who teaches International Politics at JNU. The article appeared on 21 Jan, 2020 in The Print digital news outlet, a left-liberal portal owned and run by the veteran journalist & Lutyens’ ring-master, Shekhar Gupta, a leading proponent of the double-dealing school of opinion writing.

This The Print article, is a poorly argued piece, and it follows the standard template used by Bharat’s foreign policy commentariat, that is to draw sweeping conclusions that aren’t supported by empirical data, and attempt to shoehorn their personal peeves into the analysis. 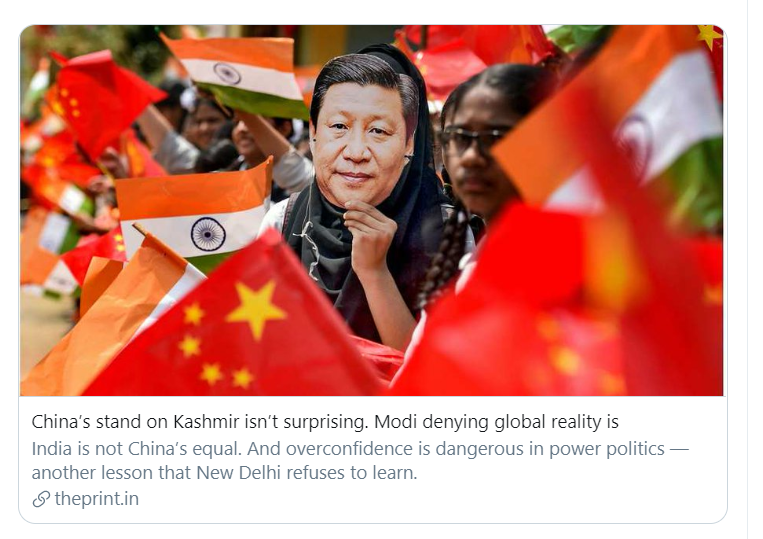 Let’s see a few examples. Rajagopalan states in his subheading that “overconfidence is dangerous in power politics”, and declares later on in the piece that “India appears to be in the grip of such nationalistic un-realism”.

Yet, the very first argument he makes is that “India persists in thinking … that it can find a modus vivendi with China by convincing Beijing that New Delhi holds no ill will towards it”. In other words, Bharat is acting meek. How the two square up is anybody’s guess.

Next, he asserts: “Indian foreign ministry officials appeared to be reluctant … to mention China” at the UNSC. For someone who furiously advocates ‘realism’, this hankering for a ‘perception victory’ is odd.

To whit, ‘naming’ China doesn’t accomplish a thing, aside from being portrayed as ‘swashbuckling’ in some utterly forgettable op-ed in the Indian press. Actual measures that address the power differential – economic actions (Huawei); stepping up engagement with the US, Japan, and other Western powers; setting up bases in the IOR; responding militarily to an incursion (Dolam) – are all being pursued.

Next, he claims, “New Delhi seems to be paying greater attention to spreading Indian culture than on building the sinews of national power.” Evidence cited are none but we’re expected to believe it because reasons.

Moving on, he makes another dubious claim: “nationalism seems to have imbued Indian foreign policy with an even greater faith in diplomacy, especially of the personal kind … it is dangerous to think they can alter the consequences of the distribution of international power.”

There are two issues with this type of thinking: One, the assumption that one tool in the tool-chest represents ‘the entire tool-chest’, that is, personal diplomacy is the be-all and end-all of the Bharat’s effort. Two, the implicit assumption that all personal diplomacy is being conducted with the goal of containing China when in fact, Bharat has several items on its diplomatic agenda. It is a nation of 1.3 billion and exercises all the levers of national power to pursue its interests.

Lastly, he states, “Nationalism also leads to an un-realistic exaggeration of our own capabilities, another Indian tendency that is new in its pathway but not in its substance. India is not China’s equal. New Delhi seems reluctant to recognise that it is far weaker than China.”

Again, we are expected to just believe this without a single piece of supporting evidence, and further, discard all evidence to the contrary.

If anything, one could argue that Bharat’s approach to the Chinese problem has been remarkably realist. The most telling instance of this has been Bharat’s response to the encroachment at Dolam. It was just aggressive enough to deter the Chinese, yet not so much that it set off a war. In the aftermath, both countries participated in high-level summits to ease tensions.

A similar sense of realism has been the hallmark of other initiatives like the takeover of Rajapaksa International Airport, right off the Chinese port facility of Hambantota, the engagement with Myanmar and the logistics agreements signed with Singapore, the US, France, and Oman, and the buildup of listening posts and basing infrastructures in Mauritius, The Seychelles, and Madagascar. All done quietly, without much fanfare.

But let’s ignore all this and wail about how Bharat is in a state of quantum duality: both a doormat and a bully at the same time. This makes for a nice op-ed that grabs eyeballs.