Hinduphobia in media is only a symptom, we need to attack the root of the problem 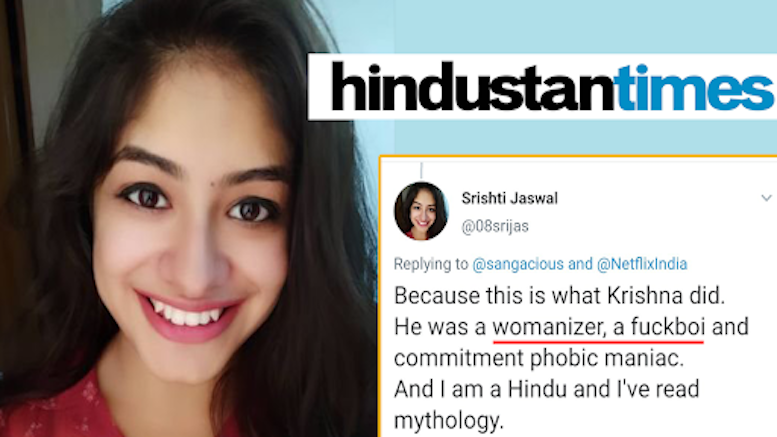 In another instance of Hinduphobia in media, a journalist working with Hindustan Times, Srishti Jaswal made a Hinduphobic comment on Twitter recently. A Telugu language movie released by Netflix named “Krishna and his Leela” depicts a person named Krishna as a man with loose sexual morals. One of his sexual partners in the movie is also named Radha, When some people raised objection in this regard, Sristi made the objectionable comment reproduced below:- This baseless, malevolent and abusive comment against one of the most admired figures in Hindu Dharma did not go unnoticed and soon the media house had to face pressure to take action.

HT tweeted that “she (Jaswal) has been suspended from duties with immediate effect” until a “code of conduct committee” looks into the matter.  This incident once again illustrates the level of Hinduphobia in Bhartiya media, especially English-language media.

Hindustan Times does not endorse Srishti Jaswal’s comments which were made on her personal Twitter handle and in her personal capacity. She has been suspended from duties with immediate effect and a code of conduct committee has been set up to look into the matter.

It is pertinent to note that this is not the first incident of Hinduphobia by media persons. The mainstream Bhartiya media has routinely mocked the beliefs of Hindus and generally shown them in a poor light. We have reported earlier how there are multiple dirty tricks which are employed by the media to this end. This includes attributing crimes of other community on Hindus, diluting crimes of terrorists by naming them as ‘militants’ or ‘activists’, making Brahmins the scapegoats in all anti-Dalit crimes etc. You can read the full post here.

Learnings from the Srishti Jaswal case

The Srishti Jaswal case is important. It is one of the first cases in which a media house has taken some action against a journalist for abusive behavior towards Hindu Dharma. It is worth remembering that due to increasing Hindu consolidation, many decisions have been taken which were thought to be impossible just 6 years ago. The granting of domicile to long-term residents in Kashmir, and even permission to organize a limited Puri Ratha Yatra in the midst of COVID have their genesis in the reawakened fighting spirit of the Hindus.

Another key learning is that the new generation of Hindus do not know much about their Dharma. Srishti says that she is a Hindu and has read the ‘mythology’. Unfortunately, a large number of young Hindus are like Srishti and have been introduced to Hindu Dharma not by their parents, but by movies, TV serials, and school books. The ‘mythology’ Srishti has read is likely from books of writers like Devdutt Pattanaik who are hand in glove with Hinduphobes like Wendy Doniger.

Steps needed to be taken

We as a civilization need to think in terms of centuries and millennia rather than years and decades. Just 1000 years ago, Islam was a small religion and Christianty was confined to Europe and parts of Asia. Hindu Dharma was spread from Afghanistan to Cambodia and Indonesia. I do not need to mention the current situation.

We borrowed the concept of secularism from Europe and USA and twisted it to become minorityism. Whereas the Queen of Britain is even today referred to as “Defender of the Faith and Supreme Governor of the Church of England” and US Presidents have spiritual advisors, we considered association with Hindu Dharma an anathema.

For far too long, we have ignored the spiritual education of our children. To fight Hinduphobia and indeed, to even ensure our survival, this cannot be ignored anymore.