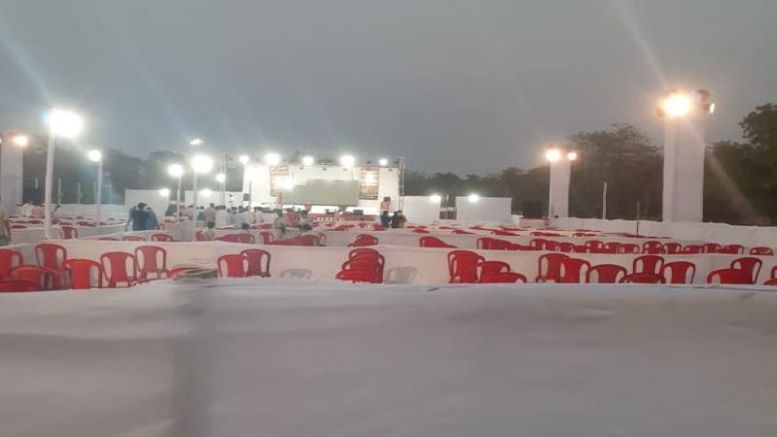 Gaya hosted a Sufi conference in the midst of a raging pandemic on April 3 in a repeat of last year’s Tablighi Markaz type event with foreigners having participated in the Sufi event. Besides the fact that the event happened at a time when the 2nd wave with exponential Covid numbers had exploded, the entire English media conveniently buried the news by focusing all attention on the Kumbh Mela in an attempt to prove how the Mela was turning out to be a ‘super spreader even though they had no facts to back their claim.

A moment I with Janab “Shiekh Ali Hussain Al-Harbi Baghdadi” Saheb, Iraq on the occasion of the “International Sufi Conference” program held on the land of Gandhi Maidan Gaya in the past, on 3 April 2021 under a pre-determined program!#Islam #sufi #Sufism #worldsufism #Gaya pic.twitter.com/4zM9vpJ7N5

The Sufi event was attended by delegates from Iraq, South Africa, and other foreign countries. A report by Dainik Bhaskar on the event says that even though the administration had granted permission only for 150 people, a pandal had been erected to host 20,000 people.

The district administration granted permission for the Sufi conference on the evening of April 2 with the condition that only 150 people can attend the event. Additionally, the district authorities had asked the organizers to ensure that Covid protocols such as masks, sanitization, and social distancing be strictly implemented while conducting the event.

Dainik Bhaskar, which reported on the event on April 3, said that the organizers were tight-lipped about the number of people who would be attending the event but the pandal raised by the organizers at Gandhi Maidan was capable of holding a crowd of 20000 people.

Several Sufiya-e-karam (delegates) had arrived at the venue and reports indicated that thousands would be gathering for the event. News reports quoted the organizers as saying that the Sufi conference was being held to send a message of peace and unity as well as to provide relief to the people who have been stressed out due to the tense environment.

A TOI report on the issue said:

Officials claimed that in view of the growing number of Covid cases, the 100-metre radius of the area from where three or more positive cases are detected, are being declared micro-containment zone and sealed.

During the last 20 days, more than 650 people have tested positive for Covid-19 infection in the Gaya district. On Friday, 191 positive cases were reported from the district.

While the entire cabal was up in arms against Kumbh Mela and quick to declare it a super spreader, such is the bigotry of the English media that far from calling the Sufi conference a super spreader, they didn’t even report the event.