This is how 19-year-old former-actress, Aamir Khan’s discovery Zaira Wasim exploits her fame 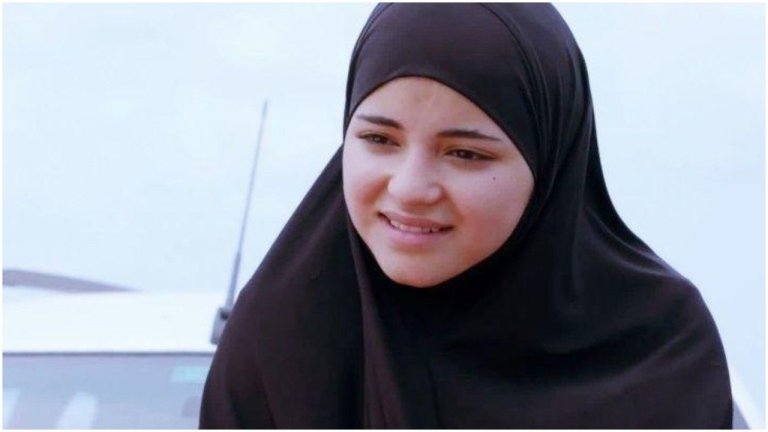 The tantrums, stunts and virtue signalling of Dangal actor Zaira Wasim are symptomatic of jihadist forces entrenched in Bollywood who threaten to rupture the dharmic ethos of Bharat with  their  subversive activities and tall claims.

Blatant, brazen, and brute jihadist forces planted in the  Bollywood industry are transformed overnight  into influential stars. They then  throw their tentacles octopus-like around the dharmic ethos of this country and smother them gradually, one small step at a time.

One such “celebrity” was Zaira Wasim who was first presented to the audience of Bharatiya films in Dangal as the younger version of Geeta Phogat.

The Srinagar-born was trolled ruthlessly by her co-religionists for trimming her hair, working in movies, and doing everything “un-Islamic.” The then sports minister from the National Democratic Alliance (NDA), Vijay Goel, came to her defence by criticising patriarchal notions. However,  Zaira Wasim  chose to side  with her people. Vijay Goel had tweeted, “Our daughters are breaking out of their cages and moving forward,” along with  a painting depicting a woman in burqa and another cowering in a cage. Wasim, however, objected  to his remarks and asked him not to link her to “such a discourteous depiction, ” and also asserted that women in Hijab were “beautiful and free”. Her innate proximity with the Islamist fundamentalists is not surprising. Incidentally,  her mother had once boastfully tweeted “Dil Dil Pakistan.”  However, the  ever-pliable Bharatiyas overlooked this treacherous behaviour and welcomed Zaira Wasim with roaring applause! Yet, her industry godfather, Aamir Khan found us intolerant! In December 2017, Zaira Wasim claimed she was sexually molested and shared a series of videos that merely showed a man’s big toe peeping through the gap between the seats. Vikas Sachdeva, the Mumbai-based businessman accused of ‘molesting’ the actor had slept through the flight as he was tired after attending his maternal uncle’s funeral. His toe might have accidentally touched Wasim, for which he apologized as soon as the actress objected. The actress and her mother who was travelling with her did not press charges after the flight landed in Mumbai. Yet, Sachdeva  was arrested and thrown behind bars without his side being heard. His  reputation was severely damaged. Our justice system, treading the path of minority appeasement, has failed  innocent  people like him multiple times. 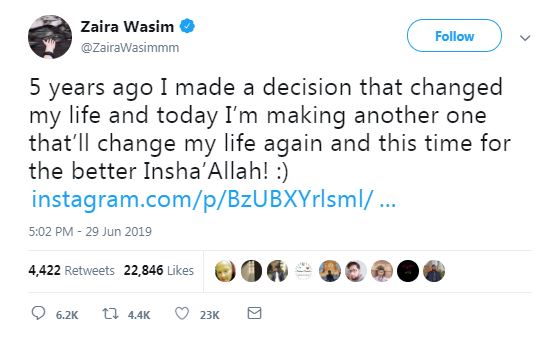 In 2019, Zaira had made a  much publicised declaration about retiring from Bollywood because according to her,  acting comes in the way of her connection with her God and her faith. She asserted that she has no interest in the  cosmopolitan life she was offered on a silver platter; a dream millions crave. To each her own, we say. She could have very well refused movie offers, quit making public appearances, and faded away from Bollywood. Meenakshi Sheshadri, Somi Ali, Mamata Kulkarni, Mayuri Kango had done that. Faith is  personal; why publicise it so much?

People had almost forgotten the three-film-old actor. However, a couple of months ago, she  appeared from nowhere on Twitter and urged her fans to stop praising her because their praises hurt her ‘Iman’ (Faith or belief). Hundreds of new faces emerge in Bollywood every day; the audience wouldn’t have taken too long to erase her out of their memories had she really wanted that. Deleting her social media handles, spending a humble life in her hometown, observing her five-time prayers, and everything else her religion demands of her isn’t that difficult.

Understandably, the 19-year-old doesn’t wish to be forgotten. She, however, wants to stay relevant and use this designated celebrity status to  brew her political tea, and spread the concocted narrative of “India brutalizes Muslims” to a larger body of Netizens. For instance, in February 2020, she took to Twitter to narrate to the world the suffering of Kashmiris. We wonder if the girl from Kashmir is aware of the  cause of the Kashmiri Pandits. Unfortunately not. In none of her tall talks about Kashmiri people, have we heard her mention their barbarous forced exodus. The real victims of violence in Kashmir were the Kashmiri Pandits, although the victim card was snatched  away from them and hoarded  by Islamists to play it repeatedly. 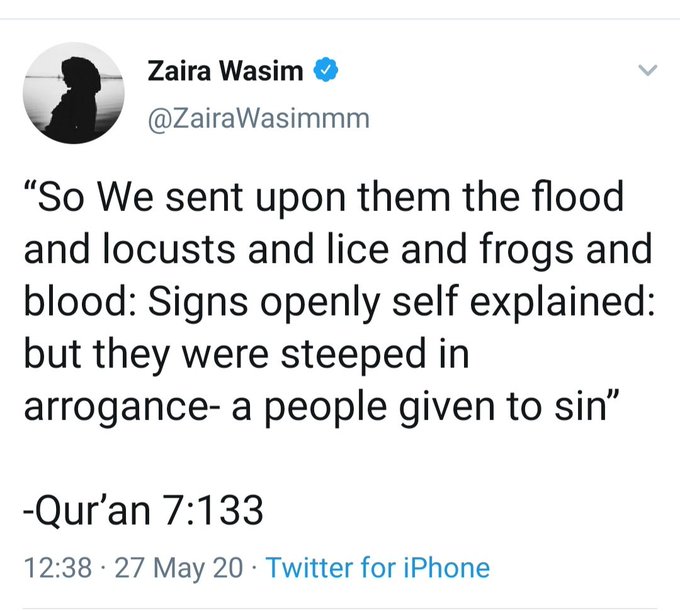 While lakhs of farmers mourn the destruction of crops and vegetation due to the locust attack, the former actor pops out to send a tweet quoting the Quran and justified that the locust attack was indeed  a curse,  and Allah’s wrath that had descended on Bharat! After being slammed for her evident bigotry, she quit Twitter, albeit, for just one day. The next day, she reappeared with justifications of her hate-infused tweets.

Zaira Wasim is no longer  a celebrity.  We, the people of Bharat, are guilty of giving extensions to her erstwhile celebrity   status.  How does a 19-year-old get motivated to such vicious extremes? This is certainly worth reflecting.

What were you doing at 19? What is your child doing at 19? We, followers of the Hindu dharma,  don’t raise our children  the dharmic way. We don’t educate them about the twisted history and politics of this country, and the sufferings of  our forefathers . We don’t initiate them  into the tradition, practices and principles of   Hindu dharma.  Instead we  want to make them Westernized. Thus, we end up behind the “Zaira Wasims” of the world who were being indoctrinated when you were reading out “Baa-Baa-Black-Sheep” to your toddler!