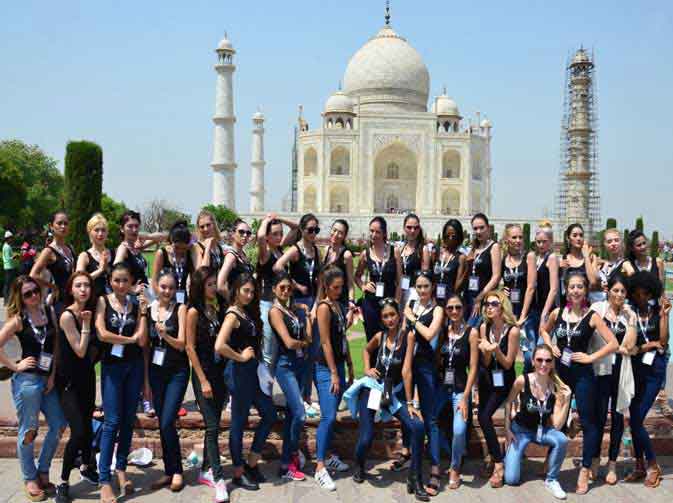 You might have thought that the Taj Mahal is a monument that represents all of Bharat, and that saffron is cherished since it is part of the national flag. But it seems that there are certain taboos while visiting the Taj – the color saffron is a strict no-no as it offends certain ‘religious sensitivities’, going by what a group of foreign models visiting the Taj had to undergo.

34 models belonging to as many countries, who are in Bharat to participate in the Supermodel International Contest being held in Delhi from April 12-22, were making a visit to the Taj when they were stopped during the security checks. These foreign models reached the Taj Mahal clad in saffron color scarves to protect themselves from the heat; the scarves also had the name of Bhagwan Ram written over them. As they were entering the Taj Mahal, the accompanying guides and CISF jawans asked them to remove their scarves saying that there is a ban on religious symbols and worship material inside the premises of the Taj Mahal.

Hindu organizations such as BJP’s youth unit Bharatiya Janata Yuva Morcha (BJYM) and Hindu Jagran Manch have opposed this incident and protested against the double standards of saffron scarves being disallowed while Muslim skull caps are allowed at Taj and other protected monuments. These organizations have announced to enter the Taj Mahal, wearing saffron scarves and gamchas on Saturday. Agra BJP President Vijay Shivabhare has questioned that if CM Yogi Adityanath comes to Taj Mahal, then will his saffron robes also be deemed unacceptable?

Meanwhile, the state Mahamantri of Hindu Jagaran Manch, Avinash Rana reached the office of ASI (Archaeological Survey of India) located at Mall road, with activists to register his protest against the matter.

”I have written to the CISF asking them to explain what transpired there during the visit. Whatever we know so far is through the media only. The models were quite happy with the visit. There was no complaint, but now after some organizations have taken offence at the alleged act, we have sought to know the details.”

The senior ASI official said that under section 8 (d) of the Ancient Monuments and Archaeological Sites and Remains Rules, 1959, tourists are generally stopped from carrying such objects although there is no specific guideline.

Shivendu Dixit, Director of the event management company which organized the models’ visit to the Taj, told TOI,

“There was no issue at all. The models were travelling from Mathura and to avoid the heat some of them had bought scarves from there. Some might have religious faith also. Actually, it was the guide who first told the models to remove the scarves and it was reiterated by security officials.”

“ASI through an order has stated that all sorts of religious symbols are banned from being taken inside a protected monument. Such scarves are among them. Our intention is not to hurt anyone’s religious sentiments, but to maintain peace and harmony.“

He also mentioned that various other things like their national flags and products of different brands that the models carried, were also not allowed inside the premises.

The leaders of Hindu Jagaran Manch said that the way foreign guests in the Taj Mahal were treated is an insult to Bharatiya culture. What will be the effect on foreign guests, they questioned.

State Advisor of Hindu Jagaran Manch, Avinash Rana, and State Minister Ravi Shankar handed over a memorandum to ASI Superintendent & archaeologist Bhuvan Vikram, and said, “Forcing foreign guests to remove things, as innocuous as scarves does not grace us. Infact, such behavior is exactly the opposite of our glorious civilization and culture.”

“If saffron stoles are not permissible inside Taj Mahal, then Muslims should also not be allowed to enter wearing skull caps,” Avinash Rana said.

Incidentally, the Taj Mahal is a mausoleum (makbara) while a mosque stands as a separate structure in the complex.

Such incidents really raise a question mark over the exact nature of the ‘Ganga-jamuni tehzeeb’ – the apocryphal composite culture which Marxist historians and intellectuals claimed was formed through fusion of Hindu and Muslim elements.

Times Now shoots itself in foot over issue

In a shocking show of incompetence, English ‘news’ organizations like Times Now have tried to spin the issue as one of moral policing by Hindu ‘fringe groups’ who asked models to remove scarves. If you watch the video snippet below, their own ground reporter contradicts what the anchor is parroting, by saying that the Hindu groups came in to the picture later when they protested against the double standards of saffron scarves being disallowed by Taj security, while Muslims with skull caps are allowed at Taj and other protected monuments.

A basic editorial check would have caught this gaping contradiction between facts and what the channel ended up reporting. But it looks like Vineet Jain, owner of Times Group, is busy threatening his competition and bullying new digital outlets, rather than worry about the credibility of his shambolic media empire.