Film Executive Cooked up Story of Harassment by Gau Rakshaks

Good reporters are supposed to have a nose for news. They should be able to sniff out a story, and separate the wheat from the chaff. But Bharat’s mainstream media does not rely on journalistic common sense while deciding what and how to report.

The largest selling English news daily – Times of India – recently ran a story on its front page titled “Gau rakshaks bully Mum exec for ‘cow’ leather bag”. It has now emerged that film executive, Barun Kashyap, the man who alleged that a rickshaw driver harassed him for carrying a ‘cow’ leather bag, has been booked by the cops for cooking up the whole story. Kashyap has confessed to the police that he lied, although the motive is still not clear.

”After collecting the technical evidence, we found out that Kashyap was at his residence during the alleged crime. After detailed interrogation of Kashyap, he confessed that he lied to us,” said Satyanarayan Chaudhary, Deputy Commissioner of Police (DCP), Zone IX, who supervised the investigation.

This report gives us the background of this whole episode –

“On August 19, Kashyap, a creative director with a production house, had claimed that the driver of an auto rickshaw he was travelling in, sniffed his leather bag and said his bag was made of leather. Kashyap had claimed that he somehow managed to escape after the driver warned him saying “Aaj toh bach gaya tu”.

After his (Facebook) post went viral, Mumbai Police lodged a complaint against an unknown rickshaw driver under Section 504 (Intentional insult with intent to provoke breach of peace) and 506 (criminal intimidation) of Indian Penal Code.

“He provided the last 4 digits of the auto rickshaw’s number plate, based on which we interrogated 49 rickshaw drivers. We also prepared a sketch as described by him and rounded up 50 rickshaw drivers,” said DCP Chaudhary.

“Kashyap, in his statement, had told us that he was bullied by three other rickshaw drivers near the RTO office. After thorough investigation, we started verifying the claims of Kashyap,” added DCP Chaudhary.

Police has lodged a case against Kashyap at Amboli Police Station under Section 153 (a)(1)(a)(b) (Promoting enmity between different groups on grounds of religion, race, etc, and doing acts prejudicial to maintenance of harmony), 182 (b) (False information, with intent to cause public servant to use his lawful power to the injury of another person) and 505 (1)(2) (Statements conducing to public mishcief) of Indian Penal Code.”

Why did media buy this story?

Anyone who has lived for any length of time in Mumbai would know that what Kashyap was saying was suspect. Many Mumbaikars had pointed out the same –

So many Mumbaikars had pointed out that such an incident could never happen in the city. But these idiots went on about intolerant Mumbai

Now, since there was a police complaint filed, one cannot expect media to ignore the news – but the question is why splash this on the front page and hype it up? Media never tires of sermonizing ordinary citizens to avoid fanning rumors when the facts of an event are unclear and police investigation is underway. Likes of NDTV routinely use the prefix ‘alleged’ when describing terrorists arrested by security agencies. So why did media not exercise similar restraint in this case?

In this case, even avid AAP supporter/music composer Vishal Dadlani and Vineet Jain (MD, Times of India group, who describes himself as ‘non conformist, free spirited, forward thinking, secular’ in his twitter bio) had tweeted on the ‘harassment’ story –

ICYMI, this Barun Kashyap guy is the AAPtard’s friend and colleague! No wonder… pic.twitter.com/R2sHVfhQ3q

Our media’s approach to journalism is largely decided by an overriding consensus of our English educated intelligentsia that Hindutva and Hindu nationalism are the most potent dangers facing the nation. Ideological predilection of editors (largely left-liberal), corporate-political tie ups of media houses and leanings of the owners are other key factors which decide media coverage and outrage. On another occasion, a Times of India reporter was trying to foment caste hatred based on false reporting of a crime.

If we look at English media coverage over the last 18 months, we will see that news reports related to certain topics have received sensational coverage, while many serious issues have been swept under the carpet: 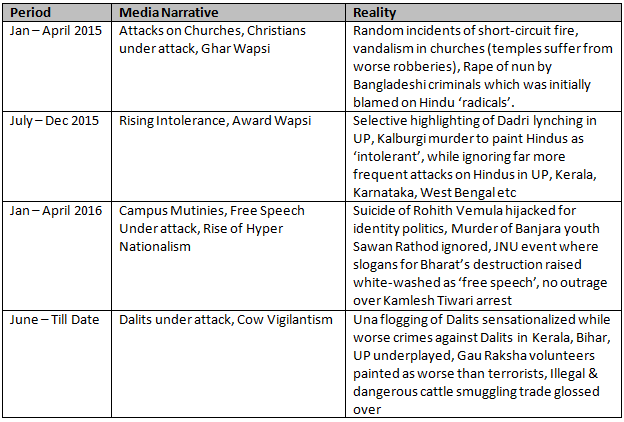 We are living in dangerous times, where a crucial pillar of democracy like media is inherently antagonistic to the ideals of truth, objectivity & nationhood.