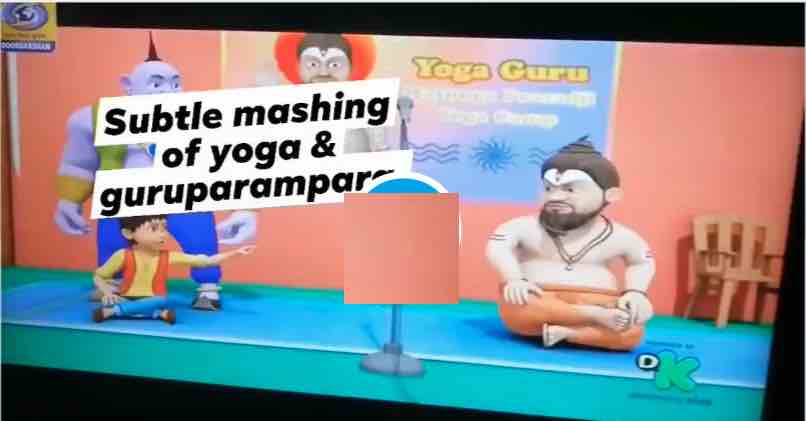 A snippet of the cartoon show Sheikh Chilli and Friendz broadcast on national broadcaster Doordarshan (DD) has gone viral with many netizens calling out the mocking of Hindu Sadhus and Yoga gurus shown in the episode.

In this particular episode of the show, Sheikh Chilli, depicted as a Muslim, humiliates a sadhu by out-performing him in doing Yoga asanas with the help of his invisible Genie (a wish-granting spirit of Arabian folklore).

Many netizens, including Padma Shri Mohandas Pai (ex-director of Infosys), complained with DD about the show:

In the jungle he meets a bigger Yoga guru called ‘Guru Ghantal’ (Hindi term referring to a fraud, charlatan). This new guru defeats Sheikh Chill as he is actually a witch in disguise.

The mocking of Yoga, mantras, Hindu sadhus and the guru-shishya parampara (teacher-student tradition) is unmistakable, and just the sort of subtle anti-Hindu conditioning which has become mainstream in all forms of entertainment media such as films, web series and now even children’s cartoons.

The show, originally broadcast on Discovery Kids channel, is being shown on DD National as part of a recent partnership agreement between Discovery India and DD to ‘inspire and entertain children across the country’ by broadcasting it and other animated series like Little Singham, and Kisna every day.

Sheikh Chilli and Friendz is co-produced by Apsons Entertainment Pvt Ltd., a Delhi based company whose directors are Parmod Kumar Bajaj and Aman Bajaj. It is part of the Mayapuri Group which owns Lotpot, a kids comic magazine, which has IP of other comic characters like Motu Patlu etc.

As per OpIndia, the show has now been pulled off the air by Doordarshan.