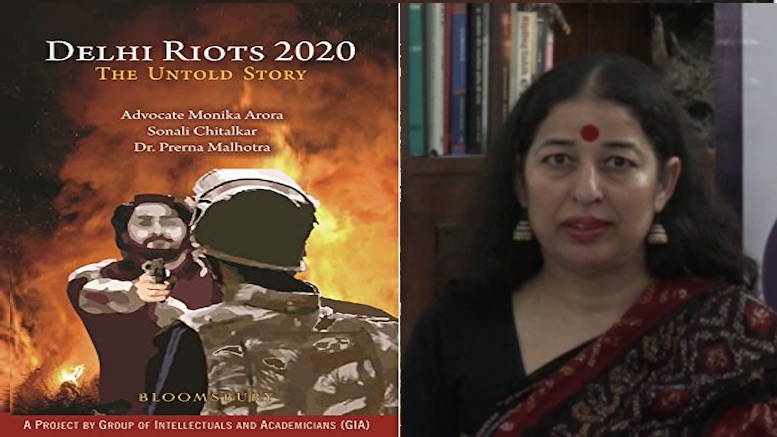 The book Delhi Riots 2020: The untold story by Monika Arora, well known Supreme Court advocate,  Dr. Sonali Chitalkar, Assistant  Professor of Political Science, Miranda House, University of Delhi; and Dr. Prerna Malhotra, Assistant Professor of  English, Ram Lal Anand College, University of Delhi, based  on their investigation and interviews with the victims of the riots in North east Delhi on February 23-25, 2020, was to have been published by Bloomsbury India in September 2020.

However, just before the online pre-launch of the book, Bloomsbury UK, in  response  to a well-orchestrated  attempt by  an international cabal of Left Liberal activists and intellectuals,  pressurised Bloomsbury India, to withdraw the book.  The backstory of the events that led to this unprecedented move by the publisher to abort the book can be found here and here based on interviews with Monika Arora, the lead author.

In this feature, we bring you excerpts from a telephonic interview with Dr. Prerna Malhotra, one of the co-authors.  An academic and scholar, Dr. Malhotra has a post graduate degree,  M Phil and PhD in English. Her areas of professional interests include American Jewish writing, communication skills, English Language Teaching, Translation studies, and Indian Writing in English.

1. Monica Arora,  Dr. Sonali Chitalkar and you are part of  the Group of Intellectuals and Academicians (GIA).  Can you tell us more about GIA and  how it led to the Fact finding mission that your trio undertook?

Group of Intellectuals and Academicians (GIA), founded in 2015,  is a group of empowered  Bharatiya women  across diverse professional backgrounds such as  law, judiciary, academics,  research, arts, writing, sports, IT,  media and entrepreneurship, committed to nation building.  Since the last five years, we have organised several seminars, conferences and have undertaken several fact finding missions across the country such as  generating ground reports on the Kathua  incident,  the  brutal rape and murder of Nirbhaya of Kerala and the Delhi riots 2020, to name a few. In addition, we talk and write extensively  about  our  experiences and perspectives  in  various traditional and social media platforms to create awareness and sensitisation among the public on contemporary issues.

2. How did the trio come together to write the book?

The Delhi riots of February 2020 took place a few kilometres from where the three of us lived.  Even prior to that, we had sensed a sense of disquiet, discomfort  and restlessness when article 370 was abrogated in Jammu and Kashmir.  However, when the Delhi riots broke out, it left the three of us simply stunned and shocked. In addition,  the discourse in the media did not reflect the ground reality. We felt  the truth wasn’t coming out.

Hence a group of five women from GIA decided to explore the 5WH (Who, what, when, where, why and how)  of the Delhi riots. We went from door to door, interviewed a wide cross section of the community and also recorded our conversations on audio and video.  However, we were not doing anything extraordinary. We  were just doing what needed to be done as academics and researchers  with rigour, honesty and credibility.

We began our investigation on February 29, 2020, when the area  became accessible. On March 11, 2020, we submitted our report to the  Union Minister of State for Home Affairs, Shri G. Kishan Reddy.

3. What were some of the highlights of the fact finding mission of the Delhi riots 2020?

There has been  systematic and sustained fake narratives and false propaganda in the media regarding the Delhi riots 2020. However, even since December 2019, following the anti CAA protests in Parliament and across the country, the violence in Jamia Milia University and the Shaheen Bagh protests seemed weird and disconcerting. It was obvious that the CAA had nothing to do with Muslim citizens. Yet it was worrisome to see a certain section of the Muslim community being radicalised at protest sites.

The Delhi riots on February 23-25, 2020, were not spontaneous;  but a planned conspiracy. We could see the pattern emerging as we began our  fact finding investigations. As we visited the riot affected areas and talked to the community, it seemed obvious that the rioters knew whom to target. In fact, the intermittent violence was seen even as early as December 2019! Besides the paraphernalia for the riots could not have been sourced and assembled in a day!  In fact, local Muslim leaders and clergy told us  of the role played by University students (Urban Naxals-Jihadi nexus) in inciting the riots!

4. What were some of the challenges in writing the book?

The book just happened… so organically! As the investigations unfolded, new truths emerged.  With  such a significant body of well researched facts, it  seemed so natural for a book to emerge! It just fell in place…. God’s will… Ishwar ki marzi… And every person we spoke to was so supportive in helping us understand what really  happened. Honestly, there was no challenge in writing the book! We began the book in March 2020 and completed it during the extended lockdown.

5. What would you have to say about the publishing cabal that controls the narrative and mutes alternative voices that challenge the establishment?

Our manuscript was accepted by Bloomsbury after a through screening  by their  editorial and legal departments. Thereafter, the relationship was cordial and mutually respectful and we also signed a legal contract with them. On August 1, 2020, the three authors received a designated number of print copies of the book. We had arranged for an online  pre-launch  on August 22, 2020 and sent Bloomsbury the pre-launch poster and the guest list. They had no objection and wished us well!  However, when the  pre-launch posters went out on social media, it marked the beginning of stormy online protests of well known authors and activists.

This cabal, who  brand themselves as champions of  freedom of expression, verbally stone pelted us and demeaned us as authors.  They even trashed our book without reading it! And worse, exerted calculated pressure on Bloomsbury UK, who in turn, bullied their Indian counterpart to withdraw the book. Smug about their success in aborting the book, the cabal accused us of writing trash based on conjectures and resorting to an elite logo like Bloomsbury to create visibility for the book! They even reportedly proclaimed that right wing writers should know their place and  the kind of publishers who would publish their  book!

6. How do you think the deeply entrenched Hinduphobia in academia, media, and publishing can be effectively countered?

We therefore need to re-create a vibrant eco system that reflects the cultural strengths and ethos of our country.  Writers and readers need to converge  in creating this sacred space.  Although Bloomsbury withdrew, the response from the people of Bharat and our people abroad has been heart-warming and positive!  As we were exploring other publishing options, our online supporters suggested Garuda Books and connected us with them!

7. How did the writing of the book impact your personal journey?

Writing this book was a new experience for all of us! (especially the Bloomsbury incident!) Although I had worked on earlier books, the truths we unearthed during our research and investigations, has emboldened us to tell it as it is!

8. What were your takeaways from the Bloomsbury saga?

We no longer want to work with foreign publishers! Instead we’d like to work towards creating a Bharatiya eco system in publications.  The unprecedented support of authors like Sanjay Dixit, Sandeep Deb, Harish Banwal and Dr. Anand Ranganathan has been overwhelming. Deb, who is  Bloomsbury’s bestselling Hindi author, has withdrawn all his titles from the publisher.  The  sordid incident, however, has inspired us to keep writing!

9. Do you see the intersectionality of gender and racism in the incident and an attempt to marginalise and silence ‘other’ voices?

A well-known White author, who is also  the Director of the Jaipur Literary Festival,  was one of the lynchpins who lynched our book. How long will the colonisers decide what we Bharatiya people  must read and write?  And we, brown gate keepers, use this yardstick  for   certifying people as ‘intellectuals!’ It’s no longer the White man’s burden to determine what narrative will be read.  Brown people matter; brown women writers’ voices matter!

10. What is the message you’d like to convey to readers?

It’s important  for the public to know the truth about the Delhi riots 2020.  The pattern and  the strategy must be known to all because these sinister  experiments  can be  replicated anywhere in the world.  People  need to know how Hindu-Muslim fault lines are exploited to divide and destroy the nation. And of course, I’d request readers to get a copy  of the book!