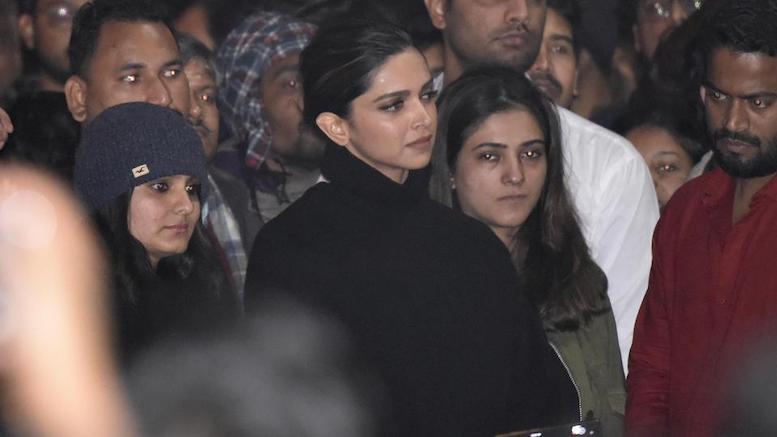 Bollywood actress Deepika Padukone decided to make a choreographed visit to the JNU campus on Tuesday to ‘express solidarity’ with JNUSU student leaders, who ironically have held the entire University hostage for 2 months over a contrived protest against hostel fee hike and have violently prevented regular, apolitical students from registering for the 2nd semester.

The game was given away when the name of her Public Relations (PR) agency, Spice PR, which incidentally also handles PR for other big Bollywood stars and has advised projects impacted by #MeToo sexual harassment disclosures, showed up in images of her visit posted by media giant BBC.

In this interview, Prabhat Choudhary, the founder of Spice PR says – “Our essential job is to tell the celebrities, today what is politically correct or incorrect, what has changed, if they behave in a particular manner what can it be construed as…For the industry’s top stars – keeping up a squeaky clean public image that’s inspirational and influential is as important..”

So just 3 days before the premier of her upcoming movie – which claims to be based on the true story of a common girl’s inspirational fight against all odds, but suffers from its own share of secular distortions that we will come to later – it seems Deepika’s PR managers have advised her to cash in on the politically correct ‘student revolution’ that left-liberal elites are proclaiming at the top of their lungs is a defining fight against the ‘fascist, communal’ Modi Government.

The fact that left-wing extremists have a history of violent disruptions at JNU, not least in the ‘Bharat tere tukde honge’ (Bharat will be broken into pieces) chants heard in 2016 or the wild celebrations that were witnessed when 76 CRPF jawans were gunned down in Dantewada by Maoist left-wing terrorists, is lost upon superficial Bollywood rent-a-cause celebrities like Deepika or their deracinated advisors like Prabhat Choudhary.

Those who wish to understand the true nature of violent activism seen in Left-dominated universities like JNU, Jadavpur need to look no further than the CPM (Communist Party – Marxist) ruled state of Kerala where an independent judicial commission last year found that SFI (CPM’s student wing) controlled students’ union offices in government colleges of Kerala have been turned into ‘idi muri’ or torture chambers.

That Bollywood is heavily infested with Hinduphobes of every hue, who waste no opportunity to indulge in overt or covert attacks against Hindus while glorifying Abrahamic faiths, is not hidden from anyone.

So while Deepika’s movie raises a very pertinent and painful issue of acid-attacks on girls, it seems that the ‘secular’ itch has forced them to mask a very crucial element in the story that the makers claim is based on a true incident.

The film traces the remarkable 2005 story of Lakshmi Agarwal, a 15-year-old student in Delhi, who was travelling to a bookstore in Khan Market when a 32-year-old Naeem Khan and his female accomplice attacked her with acid for spurning his marriage proposal.

As per reports, Khan planned the attack along with his brother Imran and Imran’s partner Rakhi as part of his “revenge” against Lakshmi. He was ultimately sentenced to seven years of rigorous imprisonment.

Now, the trailer and character names of the upcoming film have no mention of any Naeem Khan or any Muslim character for that matter. Instead, there is a character named ‘Rajesh’ in the film who it seems is Deepika’s boyfriend before the acid attack and is later grilled in court.

If one looks at crimes against women in Bharat, there is an alarming rise in the number of cases where Muslims men have been convicted/stand accused of sexually assaulting, blackmailing and even murdering non-Muslim women. Cases of grown, married men targeting minors half their age (as was the case with Lakshmi and her attacker Naeem Khan) also disproportionately involve Muslim men, as sharia law permits polygamy and marriage with minors.

Islamist teachings by radical maulvis & imams also encourage Muslim youth to view non-Muslim women as ‘immoral and shameless’ (as they do not observe the burqa/hijab that Muslim women do) and maal-e-ghanimat (war booty). Converting a non-Muslim into Islam is touted as a pious act which will ensure a place in jannat (heaven). Hence, from Pakistan to UK to Bharat, we see a pattern of Muslim grooming gangs targeting non-Muslim women.

This movie had a chance to address this serious social issue as well, but as usual Bollywood chose to obfuscate this social reality. Such selective activism makes the entire Bollywood community’s grandstanding on sensitive issues like CAA (one has to just visit the Hindu refugee camps to understand why those people deserve citizenship), such a charade.