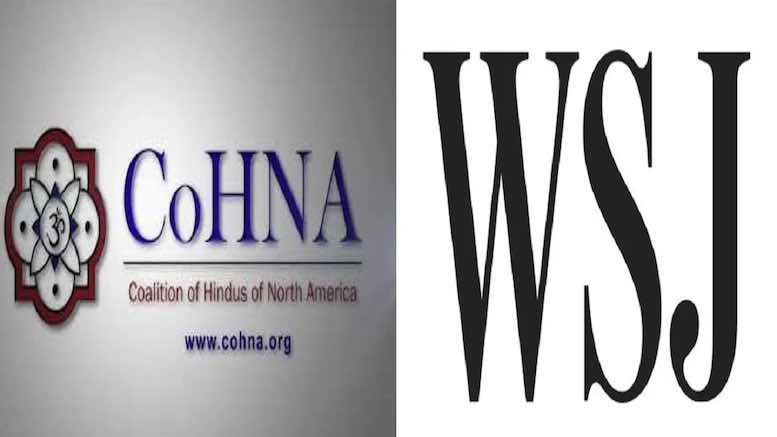 I write today on behalf of the Hindu community to express our outrage regarding WSJ’s Op-Ed, titled “Canceling Student Debt Will Be a Brahmin Bailout” (Nov. 29th, 2020) by Mr. Zaid Jilani. It is a telling sign of our times that an Op-Ed lacking erudition and factual accuracy while reinforcing Hinduphobia and stereotypes of Hindus, is part of a newspaper such as the WSJ. The callous usage of the word “Brahmin” amounts to blatant propaganda and a thinly veiled attack on the Hindu community and will promote hatred and animosity towards Hindus in the United States and worldwide.

Mr. Jilani pejoratively uses words such as “Brahmin Left” and “Brahmin Bailout” to describe certain policies being considered by the Democratic party, deeming these policies as benefiting the elitist “upper class” of the American society. By using “Brahmin” as a disparaging label, Mr. Jilani falsely paints an entire community (completely unrelated to the issue being discussed) as greedy, elitist and oppressive and furthers a colonial and racist narrative even as he launches a hostile and prejudicial attack against Hindus.

While Mr. Piketty may be a respected economist who has shed light on income inequalities around the world, his coinage of a dangerous and offensive term (“Brahmin Left”) inaccurately juxtaposes Hindu Dharma’s respected scholarly class onto the world order. It is a deliberate and nefarious mischaracterization, which assumes that Brahmin Hindus were the economic “upper class” of Bharat.

But, the article takes the “Brahmin Left” theory one step further and deems that a policy seeking to reduce or eliminate student debt is tantamount to a “Brahmin Bailout,” adding further fuel to an already dangerous and wrongful association. Inserting the term into the headline essentially provides a giant megaphone to amplify the Hinduphobia.

The truth is that Brahmin Hindus were mainly scholars, priests and teachers who were required to be devoid of wealth and power and instead focus on the pursuit of knowledge and enlightenment – quite opposite of the elitist voters being discussed in the article. Keeping with the requirements of Hindu Dharma, this section of the Hindu community has built a reputation of using their knowledge to benefit the society and advance collective wisdom.

Brahmins have made great contributions to the world, and examples like Srinivasa Ramanujan, C.V. Raman and Subrahmanyan Chandrasekhar immediately come to mind. It is a tribute to Brahmins that they have retained ancient wisdom and passed on ancient knowledge such as mathematics, steel-making, plastic surgery, inoculation, yoga, etc. across several generations, spanning thousands of years and without profiting from such knowledge. These contributions benefit all of humanity, including Mr. Jilani and Mr. Piketty.

Describing the Brahmin Hindu community as part of the economic elites of the world is a cunning and malicious fairy tale that has no basis in reality and which leads to a reinforcement of colonial and racist prejudices against Hindus. Such depictions are reminiscent of anti-Jewish caricatures in the late 19th and early 20th century, using bodily features, stereotypes and cartoons showing Jews as corrupt businessmen, usurpers, having too much world power, etc. Scholars have debated how Shylock from “The Merchant of Venice” has advanced antiJewish sentiments by depicting the character as a “stereotypical greedy Jew,” and how the play was a favorite of Nazi Germany. Similarly, African Americans were depicted as animalistic, crazed and savage based on pseudoscientific anthropological theories such as the Aryan Theories of the late 1800s. It is well known that such characterizations were used to openly justify oppression of the people and endorse a violent history of oppression of Jewish, African American, women, LGBTQ, and other communities. Indigenous peoples were also depicted in prejudicial ways in early 20th century to justify their conquest.

Just as Shylock became a byword for bloodthirsty money lenders, the article uses “Brahmin” as a byword to describe the entitled and undeserving rich. In an eerie coincidence, the name-calling and stereotyping is emanating from the “intellectuals” of the day – Shakespeare and others then, and economists/authors like Mr. Piketty and Mr. Jilani today.

What’s more, Mr. Jilani’s ignorant conflation of American politics with Hindu societal framework is colored by his anti-Bharat and anti-Hindu thought. Mr. Jilani has derided Tulsi Gabbard, the first Hindu US Congresswoman in his previous writings. His lies and half-truths have been pointed out by a Muslim, who exposed him for targeting Ms. Gabbard for her ties to the Hindu community (as if being a Hindu is a crime), and for maliciously accusing prominent and respected Indian American organizations and community members to be the handmaidens of the Bharatiya Government.

In our view, the use of such terms to frame economic policy arguments is prejudicial, sensationalist and unwarranted and skews public opinion against the Hindu community. The mainstream American audience is often fed inaccurate narratives about Bharat and Hindu Dharma, while American textbooks often characterize Hindu Dharma using negative stereotypes while ignoring its rich and profound philosophical and religious heritage.

Imagine the impact on students (the subject of this article) researching on such economic policies and turning to WSJ, as is often the case – they will be fed the false narrative that Hindus, especially Brahmins, are somehow privileged and elitist and hence should be used an example to counter economic policies supposedly aimed at benefiting the rich. It advances existing unconscious biases about Hindus within the minds of mainstream Americans and discourages an environment that fosters diversity, inclusion, and mutual respect. It can also lead to bullying of Hindus students, as shown on many occasions.

Even worse, the next time a person is disgruntled towards rich and “elite” people, what stops them from attacking a Hindu temple or a Hindu community member, with the belief that he is attacking a “Brahmin?” What responsibility will the WSJ or Mr. Jilani be ready to shoulder?

In the postmodern context that drives the discourse today, bringing such deliberate and false associations into your newspaper is dangerous to the secular and democratic ethos of America and is a deep affront to our American values. Naturally, the paper would not tolerate devious characterizations of other religious and ethnic communities to drive across a political point.

Therefore, we demand and expect that the WSJ remove the word “Brahmin” from this opinion piece immediately, and issue an apology to the global Hindu community, many of whom work on Wall Street and the financial world and are avid subscribers of your newspaper. It is the least to be expected from the editorial board from having strayed away from responsible journalism.

This is not the first instance where Wall Street Journal has shown a Hinduphobic attitude. In February this year, the paper carried a false report that IB official Ankit Sharma’s killers shouted ‘Jai Shri Ram’. Police complaints were filed against The Wall Street Journal with Delhi Police & Maharashtra Police for ‘defaming a particular religion & spreading communal tension’.