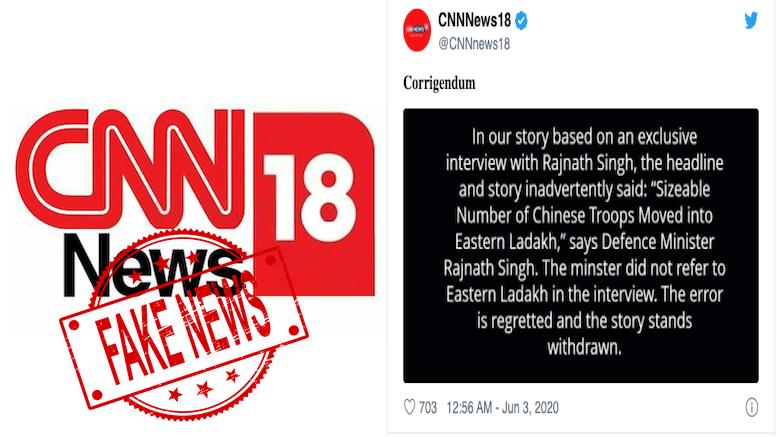 Lutyens’ media and the left-liberal intellectual establishment is desperate to whip up ‘China invades India’ hysteria over the ongoing border tensions with China along the LAC in Ladakh and Sikkim sectors. The goal – destroy the Modi government’s nationalist credentials, and demean Modi in the eyes of Bharatiya citizens as if to say, “see, how helpless your 56-inch PM truly is.”

The latest media outlet among the Lutyens’ cabal to demonstrate this desperation is CNN News 18. They decided to outright distort an exclusive interview with Defence Minister Rajnath Singh taken by their own channel to lie that the minister said “sizeable number of Chinese troops moved into Eastern Ladakh”. Turns out, the minister said no such thing, and now the channel has issued an apology and retracted their story based on the interview.

Earlier, dubious ‘defence analyst’ Col. (retd) Ajai Shukla was seen spreading the same propaganda on twitter. He crowed that “Rajnath Singh had publicly accepted what I’ve been reporting for 10 days….Chinese soldiers have crossed into India’s side of the LAC in large numbers.”

In the clip of the CNN-News 18 interview Shukla had tagged along with his tweet, the Defence Minister first gives a brief background of the border dispute with China which has led to tense standoffs before, and then adds about the present tension, “acchi-khasi sankhya mein Chin ke log bhi aagaye hain. Lekin Bharat ne bhi apni taraf se jo kuch karna chahiye, kiya hai” which translates as “Chinese (troops) have also come in large numbers, but Bharat has responded with what was required”. Nowhere does he confirm Chinese soldiers crossing into Bharat’s side of the LAC.

Ajai Shukla is regarded as a notorious defence deals middleman and is an integral member of the Congress ecosystem. He batted quite brazenly for American fighter jets to be chosen over Rafale in the MMRCA deal. He also peddled the bizarre “ISI carried out Pulwama attack to get Modi re-elected” conspiracy theory last year.

Shukla is the brother-in-law of Suman Dubey, a journalist and Nehru-Gandhi family loyalist who is one of the accused in the National Herald scam. Ajai Shukla appears on media outlets like NDTV and writes for newspapers like Business Standard. During UPA era, he was a regular on state broadcaster Doordarshan too.

Almost every day, MSM (mainstream media) aka Lutyens’ media, runs stories which are either outright fabricated or full of half-truths and distortions. And we are not even talking about the piles of newspaper op-eds which are full of superficial, baseless opinions and left-liberal anti-Hindu tropes.

Delhi police had recently slammed far-left propaganda outlet The Wire for a report accusing police and judiciary of bigotry against Muslims by mixing up two completely different cases (with similar FIR numbers) to claim that a Hindu and a Muslim man had been booked in the same case and yet had been treated differently.

This too was denied by Delhi police. But Indian Express continues to stand by its report, which is cleverly designed to muddy the waters when there are ample verified speeches of Maulana Saad in which he can be heard advising his followers to keep gathering in mosques and ignore social distancing norms  amid the pandemic.

No MSM outlet is immune to this virus of anti-Bharat fake news, they just differ by degrees. All English-language newspapers, Delhi-based ‘national’ news channels (bar a few) and significant sections of regional media are wittingly or otherwise part of the cabal whose narrative is set by ring-masters in Lutyens. In the guise of free media and freedom of expression, they are waging a proxy war against the Indian State that is far more dangerous than the wars waged by our external enemies.