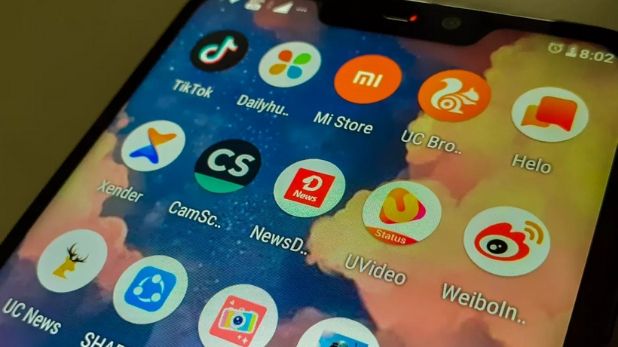 After the Government banned 59 Chinese mobile apps, print and digital news associations in Bharat have asked the Government to ban all China-backed news apps and platforms. Internet Service Providers (ISPs) have also have called upon the government to scrutinize and ban more apps, and even websites of companies backed by Chinese shareholders. Confederation of All India Traders (CAIT) has also hailed the ban on 59 Chinese mobile apps and said it will aid their “Boycott Chinese goods” campaign.

As per a Time of India report –

“In response to China blocking access to Indian newspapers and websites, Indian print and digital news publishers have asked the Centre to ban all news apps and platforms with Chinese investments.

Shailesh Gupta, president of the Indian Newspaper Society, said Indian newspapers and websites cannot be accessed even through virtual private network (VPN) as the Chinese government had raised a technologically advanced firewall.

The INS chief called China’s action “uncalled-for” and urged the Indian government to “expeditiously” ban all access to Chinese media in India and terminate collaborations and investments by the Chinese in local news outlets.

The demand for tough retaliation against the Chinese companies was supported by the Digital News Publishers Association (DNPA). Pawan Agarwal, head of DNPA, said that the government should extend the ban on the 59 Chinese apps to all news apps/platforms that have received Chinese investments to ensure “biased information” doesn’t reach Indian users. “It is time we considered upholding India’s security and sovereignty the utmost priority”, he added.”

The Indian Newspaper Society (INS), established in 1939, is an independent body which acts as the central organization of the Press of Bharat and claims to represent all the print newspapers in the country including national dailies like Times of India, Hindustan Times etc. The Digital News Publishers Association (DNPA) was formed in 2018 by ten leading media companies including India Today and others to provide ‘credible news’ and for self-regulation of their digital publishing arms. However, digital-only news outlets seem to have stayed away from DNPA.

HinduPost spoke to Mr. Shailesh Gupta, President of INS, who claimed this demand to ban all China-backed news apps and platforms was representative of all newspapers in the country. We asked whether left-leaning The Hindu newspaper was also onboard with this demand, and Mr. Gupta again re-iterated that ‘all newspapers’ were onboard with it.

News apps are aggregators that collate news from various sources and present it to readers as per their interest area. They are fast becoming the preferred channel for news consumption in the digital age. Chinese owned and backed news apps like NewsDog (part of the 59 banned apps), Newshunt (now Dailyhunt) etc. have gained huge traction and userbase in the last few years.

Such apps, which are considered part of digital start-ups and thus have no FDI caps, can be used to run subtle propaganda campaigns against the country as HinduPost had highlighted in this Nov 2018 article titled ‘How China Is Waging a Silent War Against Bharat Using News Apps’:

“Chinese communist party, which is known for its mastery over biased propaganda, can use these news apps to their maximum potential for their psychological stunts to shape the perception of Bharatiyas according to their choice. Even tracking tools can be used to analyze how the content is being received and further refine it accordingly.

And these campaigns will not be confined to only national-level parties, but China can also favor the chosen party’s alliances at a regional scale if it can access the location data of the audience via news apps. Which means, the hyperlocal campaigns can also be run by the Chinese intelligence to target the voters at constituency level, where the vernacular news apps have penetrated more.”

The Government of Bharat should move swiftly to act as per this request by INS and DNPA. We can expect opposition from the usual left-liberal, Bharat-bashing digital outlets like The Wire, Scroll etc. but the country is increasingly united in the need to isolate such fringe voices with dubious agendas.