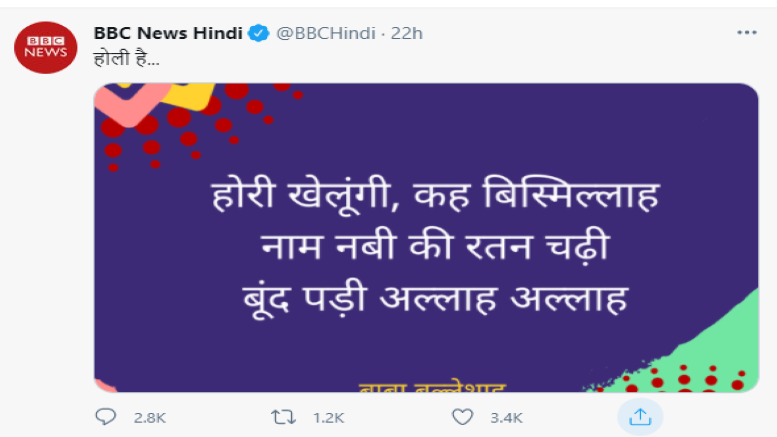 BBC Hindi which is known for its Hindumisia came up with a new trick to delink Hindu Dharma from Holi and Islamize the festival through the wishes it put out on its official Twitter handle. A new strategy is being adopted by the secular mainstream media (MSM) establishment that often delinks every Hindu festival from Hindu Dharma in an attempt to “secularise” Hindu culture and traditions. The above tweet by BBC is the latest in a long line of such cultural appropriation attempts where BBC has sought to give the Hindu festival of Holi an Islamic touch and totally dismiss its Hindu roots.

The tweet put out by BBC is an Islamic couplet by Baba Bullehshah to de-Hinduise Holi. That this was done deliberately is proved by the fact that BBC also went on to follow this up by sharing lines from12th-century Islamic court poet Amir Khusrau’s poem Aaj Rang Hai.

As is the wont of the secular cabal to link every thing Hindu with Islamists in general and Mughals in particular, BBC also published an article written by self-declared historian Rana Safvi questioning the very Hindu roots of Holi. The article titled ““Who said Holi is just a Hindu festival?” opined that Holi was not just a Hindu festival but also a tradition that was followed in the Mughal era.

In recent times, Abrahamic attempts to appropriate Hindu culture and traditions, be it yoga by the West or Hindu festivals by Islamists in Bharat where the Hindu religious and cultural roots of festivals are sought to be delinked fro Hindu Dharma itself. After Diwali, Holi seems to be the target of the cabal.

BBC has exposed its Hindumisia and anti-Bharat stance earlier as well. OpIndia pointed out how the one-sided coverage of Delhi riots by BBC had drawn flak from all quarters. Even their coverage od Kashmir is heavily biased against Bharat.

It even used the Chinese Virus pandemic to take racist jibes at Bharat. Similarly, BBC even provided platform to a British writer who was fuelling Hindu-Sikh divide. Additionally, one of the callers on BBC’s radio show launched an abusive tirade using the most foul language for PM Modi and his mother.