In yet another reminder of what left-liberal elites the world over really think of Hindus, the influential American non-profit media outlet NPR’s producer based in New Delhi tweeted this on Monday – 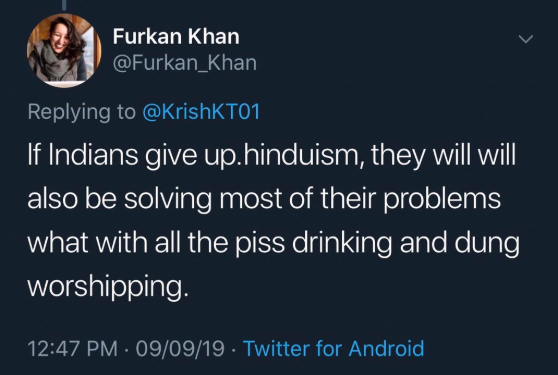 Dehumanizing Hindus as ‘cow piss drinkers’ is a mindset that left-liberals share with jihadi suicide bombers like the Jaish-e-Mohammed terrorist responsible for the Pulwama attack, who said this in a video message recorded before the attack –

“O, you impure mushrik (non-believers) of Hindustan, listen carefully. You cow-piss drinkers do not stand a chance against us.”

After various people expressed their shock at such brazen anti-Hindu bigotry, Furkan Khan first tried to weasel out of the situation by claiming she was instigated by a troll to respond with a ‘sarcastic stereotype’, then deleted her tweet to avoid being ‘misrepresented’, before finally tweeting a ‘wholehearted apology’ claiming she didn’t mean to disparage Hinduism.

Furkan Khan seems to have a penchant for anti-Hindu bias and pro-separatist views over Kashmir, as this article shows.

Lest one thinks that it is only Muslims liberals who disparage Hindus as ‘cow piss drinkers’, let us remind that there are several with Hindu-sounding names who do the same as well. Here are a few examples –

But Hinduphobia is not new to NPR. A cursory glance at their coverage of Hindus will show the usual left-liberal obsession with cow protection vigilantism, cow dung produce, Hindu mobs, Hindu nationalism etc.

A condescending ‘apology’ for a 2013 NPR podcast jibe (said podcast was actually providing intensive coverage of the search for a new Roman Catholic pope) at Hindus in which Shivratri celebrations in Nepal were stereotyped as ‘pilgrims streaming past naked ascetics smoking dope,’ is a must-read to understand where NPR and its ilk are coming from.

But at least there was some genuine self-reflection in that 2013 ‘apology’ when the NPR staff admitted Hindu Dharma  is “a religion that for most Americans remains exotic.”

In a way, such bigoted attitudes as demonstrated by NPR producer Furkan Khan are a wake-up call for practising Hindus to challenge anti-Hindu stereotypes which abound in the Western world (the ‘cow, caste and curry‘ syndrome) and within elite circles of Bharat itself. We need to learn to articulate Dharma using a modern idiom and not be afraid of calling out anti-Hindu bigots, however powerful they may be, for what they are.

And of course, we need to consistently show the mirror to practitioners of supremacist Abrahamic religions who claim to be ‘saving souls’ out of ‘God’s Love’ or for ‘spreading peace.’

It will also be interesting to observe how NPR responds to the anti-Hindu bigotry of its employee Furkan Khan, seeing how they fired senior analyst Juan Williams for ‘anti-Muslim’ remarks on a Fox News TV show. At the time, NPR had said in a statement that the remarks “were inconsistent with our editorial standards and practices, and undermined his credibility as a news analyst with NPR.”

Let’s see if Furkan Khan’s remarks are inconsistent with NPR’s editorial standards and practises, or merit another lame ‘apology’, or are ignored altogether. Smart money would bet on the 3rd outcome.