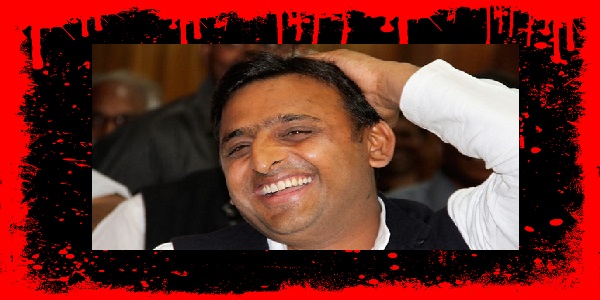 Uttar Pradesh CM Akhilesh Yadav crassly abused an Aaj Tak journalist after he was asked some routine questions yesterday, while the 3rd phase of polling was underway in the UP assembly elections. This was revealed by Aaj Tak anchor Anjana Om Kashyap and two senior journalists Javed Ansari and Sharat Pradhan, during a live election show from Lucknow.

Mainstream media likes to believe that it is better than our politicians, and they are the ones fearlessly guarding our republic against the foul-mouthed, venal political class. Hence, in the normal run of things, if a politician were to abuse a journalist, you would expect media to go hammer and tongs at the offending politician. However, in the clip above, one can see the senior journalists going easy on Akhilesh Yadav’s atrocious behavior and actually offering excuses for him!

They offer various explanations for the abusive language used by the 43-year-old ‘youth’ icon Akhilesh – “this is just election-related tension, frustration; he has been backstabbed by his uncle; he is rattled by the tough electoral contest, especially in the stronghold of the Yadav clan – central UP; this is not his normal behavior for Akhilesh, said Ansari …he is under tremendous pressure; he has been the most cool & composed in all his rallies, but this phase seems to have shaken him;”

This sort of overt bias towards perceived ‘secular’ forces and corresponding hate for ‘communal’ Hinduvadis is nothing new for AajTak or the India Today group. Incidentally, the same Javed Ansari who defends Akhilesh here, during a 2013 India Today conclave had angrily asked then Gujarat CM Modi why he had never expressed ‘regret’ for the 2002 riots.

Going by reliable sources on twitter, the expletive hurled by Akhilesh (which AajTak anchor Anjana Om Kashyap said cannot be quoted on TV) was “गां** मैं बैंस घुसेड़ दूंगा” (I will stick a bamboo in your a**). It seems that Akhilesh has learnt the language from senior ‘secular’ politician Mamta Banerjee who in 2014 had threatened BJP President Amit Shah with pechone baansh (bamboo up the backside) if he dared to visit West Bengal.

It goes without saying that if any BJP leader  had used similar language, the media would have been all over him like a rash and blown his/her public image to smithereens. In fact, BJP leaders have been lynched on national TV for far-far less – remember Vinay Katiyar who was berated endlessly for an innocuous comment on Priyanka Vadra? But ‘secular’ netas like Akhilesh enjoy great leeway with our media – in fact, the entire left-liberal mainstream media cabal is rooting for the Akhilesh-Rahul Gandhi combine in the hope that they will derail the Modi phenomenon, first in UP and subsequently in the rest of Bharat in 2019.

This is not the first demonstration of the reality that lurks behind the suave, cultured public mask that has been carefully constructed for Akhilesh Yadav by a fawning media. In this video from a few months back, Akhilesh can be seen menacingly snatching the mike away from his septuagenarian father.

In 2014, when a lady journalist had questioned Akhilesh over the rising graph of crimes against women in his state, he angrily retorted, “I hope you have not faced any danger!”

The ugly truth of Bharatiya politics is that almost every young dynast on the scene today is a petulant, entitled, below average, rootless individual – Akhilesh Yadav, Rahul Gandhi, Tejashwi Yadav (Lalu’s son) being symbols of this deep malaise in our body politic.

While every detail of Modi’s life is minutely scrutinised – are his visits to his mother just image-building exercises? why doesn’t Modi keep his mother and the rest of his family with him in the luxury of Delhi? why are Modi and his wife separated? – the left-secular politicians like Yadav clan of SP, Lalu’s dynasty, and the Nehru-Gandhi clan are all given a free pass.

Lets just take a look at the brazen cheering by leading media owners and senior journalists for Akhilesh Yadav – a man who has delivered the worst Government from a law & order standpoint that UP has seen in the last 2 decades. Even recurring murders of journalists in UP in the last few years did not draw any words of condemnation from these media icons –

It's amazing how Lucknow& noida have such good roads&low traffic vs delhi/Mumbai. Good planning https://t.co/7Cuy3aqPY0 via @timesofindia

No communal overtones or appeasement noises from @yadavakhilesh More positivity than negativity in speeches. Short on rival abuse.

While Modi was grilled & demonized for over a decade due to his alleged silence on the 2002 riots, Akhilesh Yadav is praised to the skies for building one highway in a 5-year term, overlooking the rapes, multiple riots, lawlessness, nepotism and lack of employment opportunities under his rule.