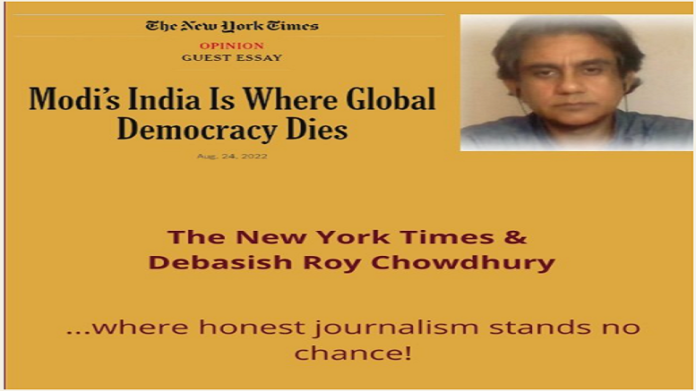 After reading Ashley Rindsberg’s The Gray Lady Winked [1], I have lost all respect for the self-anointed saviors of the free world, like The New York Times, The Washington Post, and other news purveyors of their ilk.

(Note: This book is a must-read for anyone who wants to get an up-close look at the agenda-driven journalism practiced by one of America’s most vaunted purveyors of news, The New York Times [2]).

Therefore, when the recent hate-filled article in NYT, “Modi’s India Is Where Global Democracy Dies,” was brought to my attention, I dismissed it as one more example of the anti-Hindu, anti-Bharat bilge that typically comes out from this news rag. Likewise, the apparent Bharat/Hindu connection of the article’s writer, Debasish Roy Chowdhury, did not surprise me, for I have seen plenty of mentally colonized “sepoys” [3] of his ilk, ready and willing to do the dirty work of their foreign masters.

However, when two prominent Hindu Americans shared copies of their letters to the editor with me, expressing their outrage at the blatant lies in the NYT article, my curiosity was aroused. Since the probability of the NYT ever publishing these letters is between zero and nil, we reproduce them here in full for the benefit of our readers:

I have news for Mr. Chaudhury and the New York Times. You can defame, denounce, malign, vilify, demonize, marginalize, attack, character-assassinate Narendra Modi all you want, as you’ve been doing since 2002, but he is still the best Prime Minister India has ever had. Ask the heads of state who know him. Your mean, mealy-mouthed, malicious lies about him — which you know well are lies — have zero effect on Indian voters. Go cry in your soup.

This goes on because so many of your readers implicitly trust the Times. Amd the Times abuses that trust to hoodwink them into its own agenda. The Times’ record of lies since inception, in so many instances, is well documented [1].

Just know that not everyone in your readership is hoodwinked. Some of us can think!

As an American Hindu I am appalled by the bias in your article declaring India’s Democracy is under threat. The evidence from a new Pew Research Center report on “Religion in India: Tolerance and Segregation”   survey examined the religious tolerance in Indian society under Modi’s leadership. A key finding was that 89% of Muslims felt free to practice their religion, as did 91% of Hindus, 89% of Christians, 82% of Sikhs, 93% of Buddhists, 85% of Jains and 91% of the overall Indian population. The Pew survey covered nearly all of India’s states, with face-to-face interviews of 30,000 adults in 17 languages during 2019 and 2020.   Becket Adams, Program Director of the National Journalism Center [4], stated that he is leery of straight news initiatives that are pro- or anti-anything, even “democracy.” India is a rare jewel of democracy.

The reality is that this opinion piece is full of accusations and assertions, many of which have been investigated over and over, and proven to be baseless. Therefore, a pointwise response would be a waste of time. Here we offer a few excerpts from it to show how ridiculous Chowdhury’s thesis is.

Consider this excerpt from the opening paragraph: “Prime Minister Narendra Modi stood last month atop India’s nearly completed new Parliament building, built to mark the country’s 75 years of independence, and pulled a lever. A sprawling red curtain fell back to reveal the structure’s crowning statue. Many across India gasped. The 21-foot-tall bronze figure — four lions seated with their backs to one another, facing outward — is of India’s revered national symbol. The beasts are normally depicted as regal and restrained, but these looked different: Their fangs bared, they seemed angry, aggressive.” Mr. Chowdhury simply needs to have his eyes examined. The sculptor has categorically stated that he simply enlarged Ashok’s original, and that the teeth are more visible from an angle. I have verified this statement by looking at images online, which Chowdhury neglected to do.

Then this observation: “I grew up in West Bengal. After independence, the state was led by the Congress Party, which freely deployed goons and the police to stifle opposition. It was followed by the Communist Party, which held power for 34 years and thoroughly emasculated state institutions. West Bengal is now ruled by a party whose leader projects herself as a national alternative to Mr. Modi’s authoritarianism but has likewise been accused of relying on brute force, cronies and a cult of personality.” The point Chowdhury seems to make is that West Bengal is used to corruption and that a political opponent of Modi is amply qualified on that score.  Why does Mr. Chowdhury think this is Modi’s fault?

“Muslims can now be arrested for praying in public.”First of all, Chowdhury seems oblivious to the fact that 27 Muslim countries including Saudi Arabia prohibit or restrict namaz (Muslim prayer) in the open or on the street. Secondly, imagine for a moment a crowd of thousands coming out of the woodwork. without any prior notice, descending on Time Square…several times a day! Let that image sink in for a bit!

“A high-ranking B.J.P. leader called Muslim refugees from Bangladesh “termites” eating away the country’s resources.” Was this leader speaking for the BJP, as Mr. Chowdhury implies? Did he check? More importantly, over 10 million refugees entered Bharat illegally from Bangladesh, and have displaced citizen workers by lowering wages. America (if not Mr. Chowdhury) ought to understand the problem

In summary, although opinion pieces don’t have to be factual, this one is especially low on truth. It makes willy-nilly accusations that barely make sense, and fails to check out certain elementary but important facts (easily done on the Internet)  No one checked facts at the Times either. Are you guys that desperate to get Mr. Modi?

(This article was first published on hindudvesha.org on September 2, 2022 and has been republished in full with permission. Minor edits have been done to conform to HinduPost style-guide.) 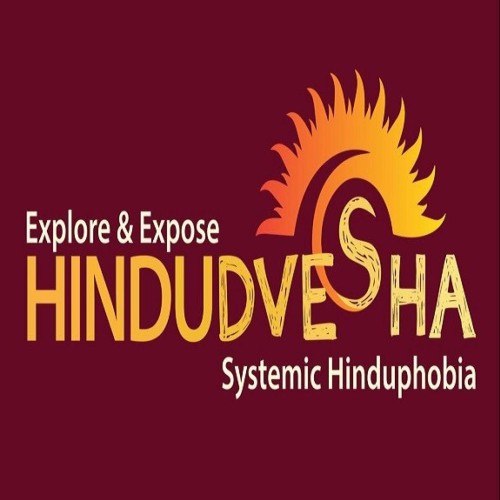