Give
HinduPost is the voice of Hindus. Support us. Protect Dharma
GIVE
20.2 C
Varanasi 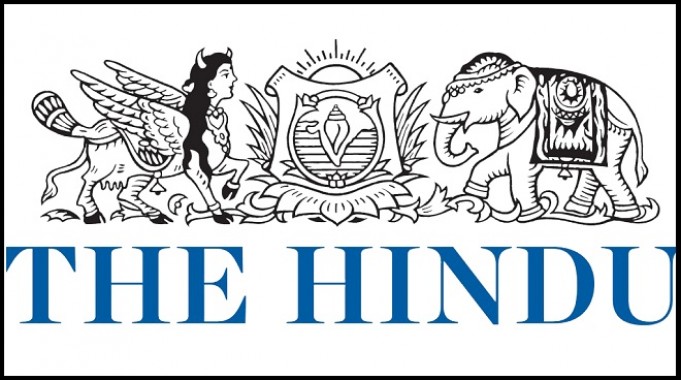 The Hindu newspaper recently carried a news report claiming that a woman who was critically injured during the tragic foot over-bridge stampede in Mumbai, was molested as she lay dying.

It now turns out that the video based on which The Hindu reporter filed this report was misleading – the person who was accused of molesting was actually trying to help the injured woman. The Hindu has acknowledged their error – and withdrawn the report – a statement on twitter said

“A perusal of the clip mentioned in the story does not warrant such a conclusion. The report’s publication was the result of the failure to adhere to journalistic norms.“

How an MSM outlet (one that is prescribed reading for IAS aspirants in the country) can make such a basic error like not studying the video clip based on which a sensitive story is run, is deeply worrying – it tells us a lot about the mindset of the editorial staff who are pre-conditioned by liberal group-think to believe such stories as they validate deep-rooted beliefs about Bharat being a sexually perverted, misogynistic society.

And even in apologizing, the arrogance of The Hindu editorial team could not be suppressed –

Yes, thanks for the vicious gloating.
But think of what it takes to recognise and apologise for an error. https://t.co/j1gcS1tpg9

But the damage has already been done. Any negative / outlandish story related to Bharat and Hindus is lapped up by the global media industry, and this one too has traveled quickly to Western outlets –

Joke is on you Mumbai & India. The Hindu lied & deleted. But International media will continue to besmirch you. Muhahahaha pic.twitter.com/j7cjtEPdUI

Many desi liberal media outlets like FirstPost, DailyO and others also ran stories based on The Hindu’s false news. An article on DailyO titled ‘Elphinstone Stampede: Dying woman was molested on bridge. We are the pits’ is especially virulent in painting Bharat as an irredeemably evil & misogynistic society ruled by an apathetic Government. The anonymous writer of this vitriolic piece goes by the name ‘DAILYBITE‘ and appears to be a regular contributor to DailyO, a portal run by Aroon Purie’s India Today group. A quick glance at DAILYBITE’s outpourings for DailyO reveals his/her agenda – Modi-bashing, Hindu-bashing and Bharat-shaming rules the roost, with the odd pro-Congress and sci-tech articles to break the monotony.

Here are some of the extracts from this venomous piece which tries it best to shame Bharat, Hindu males and the BJP Government in Maharashtra and at the centre, by piggybacking on the alleged act of a dying woman being molested –

Exactly when you thought we can’t sink any lower as a nation, as a collection of spineless people watching our country rot and crumble right before our eyes, something happens to confirm we are utterly wrong.

complete dread fused with utter disgust at her fellow Indians.

This is pure sickness.

how much can you humiliate a woman on the verge of death, sacrificed at the altar of a regime’s unpardonable arrogance and criminal apathy?

The everyday misogyny of India

Have we, as a society, crossed the Rubicon of barbarism? Of disgusting misogyny and violation of hapless female bodies? Is this India 2017? We must hang our heads in shame because this indeed is it.

Above all, the piece tries its best to fill Hindu women with disgust towards this Government and Hindu society in general. All the tropes in the liberal arsenal – linking sexual violence against women to Hindu orthodoxy, pinning judicial/legal failures to convict rapists on the ‘patriarchal Hindu mind’, demonization of the institution of marriage- have been deployed by this writer.

Here are the counters to this vicious propaganda –

1.) Many of the misogynistic practises prevalent in Hindu society today are a result of the colonization we have endured for centuries. When the inhuman Muslim hordes from Central Asia started targeting Hindu girls and women as sexual slaves, the instinctive Hindu reaction was to cover up girls and confine them to their homes, where they were relatively safer. Over time this evolved into the purdah system, led to early marriage and restricted movement for girls.

These safety measures became ingrained into our culture and persisted even when the threat levels receded. But Hindu society is now coming out of this mental assault, as can be seen in the rising profile of women in all fields. Sadly, the Muslim mindset still remains unchanged and every garden-variety maulvi will tell you that “women who do not cover themselves properly are like uncovered sweets which will attract flies.” Why is the fiberal crowd not talking about the disproportionate number of sexual attack cases involving Muslim men preying on Hindu women?

2.) Hindu women in the south of the country (a region less affected by the Muslim invaders) went bare-chested even upto the arrival of the British colonialists. In the 17th century, the Queen of Travancore (modern day Kerala) met a Dutchman with the upper part of her body almost naked. The Victorian morality introduced by the British led to the female body getting sexualized and sex became a dirty, forbidden thing.

The earlier balanced approach that Hindu society had towards sex as a part of the four purusharthas (driving principles of life) i.e. dharma (moral duty), artha (economic prosperity), kama (love or pleasure) and moksha (spiritual liberation) got lost. How this British/Western mindset still endures within the ‘modern’, urban Bharatiya has been excellently analyzed in this OpIndia article.

3.) Why are these liberal voices silent about the degenerative influence of Bollywood and other aspects of Western-influenced modern pop culture? The West is today grappling with problems of teen sexualization, pregnancy and broken families. The case of 15-year-old Audrey Pott, who committed suicide after her classmates in a top California school circulated cellphone photos of her being sexually assaulted while passed out drunk, at an alcohol-fueled house party where all the ‘cool girls’ were dressed in see through shorts with thongs pulled up – is a chilling reminder of the direction we are headed.

Bollywood icons like Karan Johar, Khans and others are held up as progressive, pro-women voices – but why doesn’t anyone question them on why mainstream movies have totally objectified women through ‘item’ songs with lyrics like ‘Main to tandoori murgi hu yaar, Gatka le saiyyan alcohol se!’ (I am like a Tandoori chicken my darling, why don’t you swallow me down with alcohol)? Every dance reality show on TV today has children, some as young as 7-8 years, gyrating their bodies to such atrocious lyrics and learning how to satisfy the male gaze. Stalking has been mindlessly glorified, with every other movie showing it as a legitimate way to win a woman’s heart. Comparison of music and lyrics today with 50 years back will show how obsessive, desperate lust is today branded as love, compared to the gentle wooing of yesteryears.

4.) Past and ongoing negative influences aside, Hindu society is well aware that it is faced with serious issues like female infanticide and need for more women empowerment. Urban Hindu society has made good strides in this area and women are joining the workforce in ever-increasing numbers. The so-called ‘regressive’ BJP Government in Haryana has taken the lead in implementing the ‘beti bachao, beti padao’ scheme – leading to Haryana crossing a sex ratio of 900 girls as against 1,000 boys for the first time in 15 years. Women’s safety continues to be an issue – and people’s impatience with lackadaisical police and judiciary is rising. However one aspect of this issue, which is reinforcing a value system in children, is shouted down by the same fiberal mob as ‘saffronization’.

Now, lets address the obvious swipes taken at the current NDA Government, and the hidden swipes against RSS.

5.) Fiberals would have you believe the current NDA Government is the embodiment of ‘casteist, patriarchal, Brahminical hegemonistic Hinduism.’ Nothing could be farther from the truth. The Sangh is at the forefront of ending caste discrimination in Hindu society, whereas regional caste-outfits like SP, RJD, NCP (which the fiberals support) are the ones perpetuating this evil at the grassroots. The essence of Hindu thought is that both female and male are equal –  masculine and feminine energies of the universe (Purusha and Prakriti) cannot exist without each other. Both have rights, but also duties towards each other and towards society.

7.) The country was rotting and crumbling before our very eyes in 2012 – we sat up and took action by supporting the person best-qualified to lead us out of the bottomless pit Sonia Gandhi had dug for us during UPA 1 & 2. And Modi has taken huge strides against the arrogance, apathy and CORRUPTION that had come to define politics in the country after 50 years of Congress Raj –

Things are not perfect and there have been obvious areas of disappointment like Education, Skill Development and Job growth. But there is a tangible change all around and the nation is finally on the move, again. Hinduphobic, Congress propagandists like DAILYBITE should be dismissed with the contempt they deserve.